The Houthi takeover of the Yemeni air force led to the Saudi military intervention in Yemen, while al-Qaeda is using the absence of local forces to advance in strategic regions in the country. 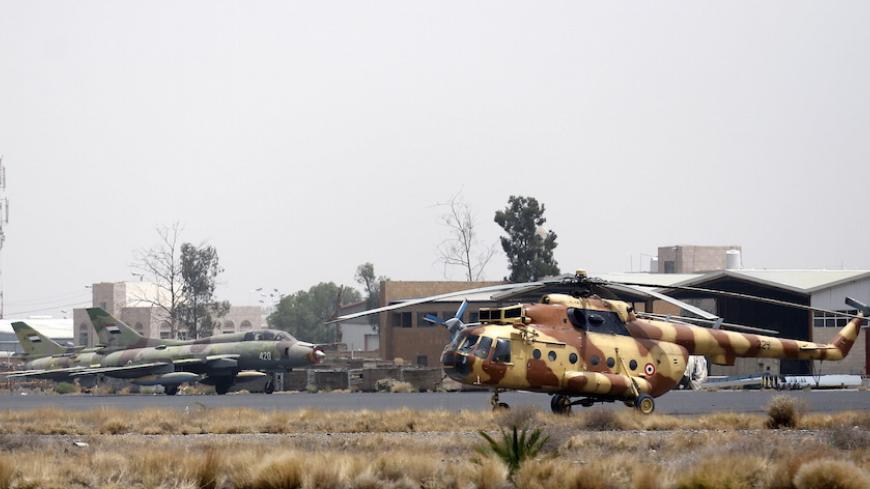 Yemeni air force MiG-21 fighters and a Mil Mi-17 helicopter are seen at an air base near Sanaa International Airport, March 28, 2015. - REUTERS/Khaled Abdullah

Two military aircraft took off on March 25 from Sanaa’s al-Daylami air base, which is under Houthi control, to launch an attack on the Yemeni president’s residence in the al-Maasheeq district of Aden. Hours after the operation, the Saudi-led military intervention began with multiple attacks that announced the start of Operation Decisive Storm. Though the operation officially came to an end 25 days later, airstrikes are continuing.

The Yemeni air force, established in 1934, is the oldest military unit in Yemen. This is the first time, however, that the air force has been involved in a direct political conflict, and it is also the first time a party other than the Yemeni state has called on it. Former President Ali Abdullah Saleh and his opponents relied on different forces in conflict situations in the past.

Al-Monitor learned that in the days after President Abed Rabbo Mansour Hadi’s escape from the Houthis in Sanaa to Aden, the Houthis ordered the leader of the Yemeni air force, Maj. Gen. Rashid al-Jund, and his chief of staff Abdul Malik al-Zuhairi to prepare to launch different attacks on Marib governorate and on Hadi’s residence in Aden.

In early March, the air force refused to obey the Houthis’ commands, saying that it only takes orders in these matters from the president or the minister of defense and that there was no military reason to take such a step. Consequently, the Houthis tightened the noose on the air force and brought in a leader who supports them: Brig. Gen. Khader Salem. They also forbade the former leaders, Jund and Zuhairi, from entering the base. This step was perhaps the most significant change in the balance of power in favor of the Houthis among the armed Yemeni parties and between them and the government.

Air force members (especially pilots) undergo stringent and essential military training. Therefore, the Houthis could not use favoritism and loyalties to employ their pilots, as they did with those in other positions — when heads of the army and navy announced their loyalty to the Houthis in different governorates — because such tasks need specialized skills. They could not exploit the air force as easily as they wished. Most pilots refused to take orders from the Houthi leaders to launch military attacks on the president’s residence in Aden. Therefore, the Houthis had to use the carrot-and-stick approach. Air force sources told Al-Monitor that the first air raid by fighter planes from al-Dulaimi air base in Sanaa cost the Houthis more than 100 Glock guns and thousands of dollars paid to pilots to execute the operation.

The Houthis’ control over the air force did not happen overnight. It was the result of a series of careful attempts to control what was left of the army. Since they took over Sanaa in September 2014, the Houthis tightened the noose on military units affiliated with their longtime enemies, such as the 1st Armored Division once led by Ali Mohsen al-Ahmar.

However, during the fall of Sanaa, the Houthis avoided involving other military forces, especially those that have been trained well, such as the air force. Instead, they sought influence in these military units by imposing on Hadi after the signing of the peace agreement in September to appoint their own. Under pressure from the Houthis, Hadi issued a Dec. 27 military decision to appoint several of their leaders — including one of their previous field leaders, Zakaria al-Shami — to Yemen’s armed forces. Al-Monitor learned that when the Houthis later wanted to use helicopters to film their religious rituals from the air, they received an official memorandum from Shami permitting military planes to fly. In the past, the command had refused this type of request, but Shami’s appointment as deputy commander in chief allowed him to give such orders.

The Houthis did not stand alone in their enmity with the Yemeni air force, which was the only force that gave the state the upper hand. Other Yemeni parties — such as Saleh and al-Qaeda, which had exerted a certain influence that did not reach the air force — were also at odds with it. In the past few years, up until mid-February, Yemen's air force was the only military unit that engaged in a direct war with al-Qaeda, which carried out assassinations claiming the lives of dozens of air force leaders and pilots.

For instance, four air force helicopters crashed in Sanaa since the new leadership took power in 2012. Former air force Cmdr. Mohammed Saleh al-Ahmar had refused to hand over control without international brokerage, which UN envoy Jamal Benomar handled in April of that year. In 2013, Ahmar told Al-Saeedah that his forces conducted over 800 aerial reconnaissance flights from Al-Anad air base in 2011-12, when al-Qaeda was in control of Abyan governorate in the south.

In June 2012, during a visit by Al-Monitor to Brigade 21 Mika in Abyan, which remained in al-Qaeda’s control for almost a year, several soldiers said that the only air supplies they received were those dropped by Yemeni pilots. The aid dropped by the Saudi air force — which did not officially participate in the war against al-Qaeda — missed its target and fell in the hands of al-Qaeda, despite the advanced technology of the Saudi planes.

The Houthis pushed the Yemeni air force into the current political conflict in Yemen, and this has not only led to military intervention but also damaged this military unit and its air bases and aircraft. For years, Saudi Arabia and the United States provided millions of dollars for the battle against al-Qaeda, which now no longer faces opposition from any other military unit with the collapse of the Yemeni air force. Al-Qaeda has given free rein to its members and operations to control highly significant regions, without any resistance. The takeover of Hadhramaut governorate on April 3 stands witness to this. 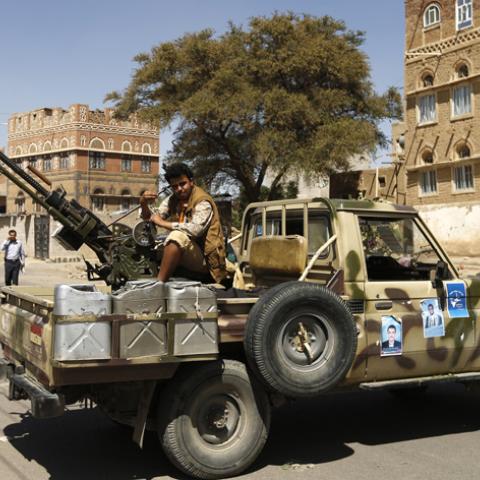