Yemen's temporary capital Aden has turned into a scene of bloody operations against government, security and military officials. 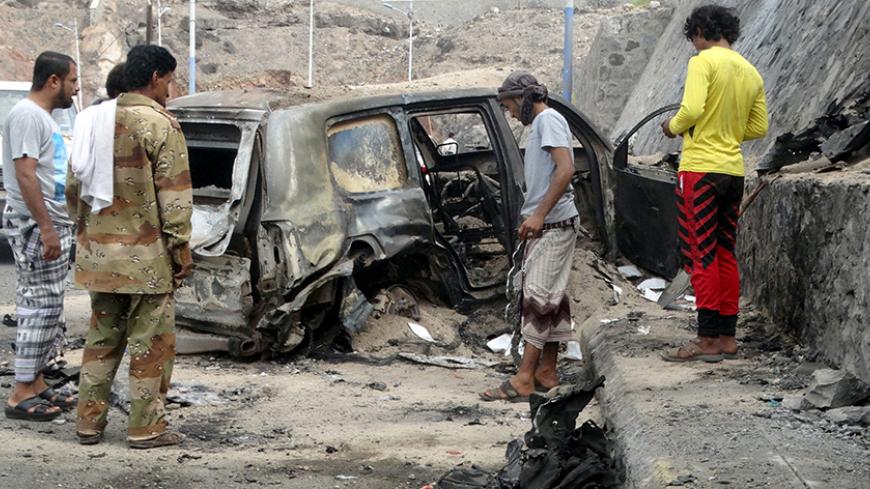 People look at the wreckage at the site of a car bomb attack that killed the governor of Yemen's southern port city of Aden, Dec. 6, 2015. - REUTERS/Nasser Awad

On Dec. 6, Maj. Gen. Jaafar Mohammed Saad, governor of the city of Aden, was killed in a car bomb targeting his convoy in Aden, in southern Yemen. The attack confirms that insecurity has reached severe heights in the temporary capital of Yemen’s President Abed Rabbo Mansour Hadi.

This attack came amid a series of other security incidents, such as the killing Dec. 5 of the head of the Aden-based anti-terrorism court, Mohsen Alwan, in the city of Mansoura. On the same day, unknown armed assailants killed military intelligence officer Col. Aqeel al-Khodr in al-Mualla district.

Four hours after the governor’s assassination, in a statement online, the Islamic State (IS) claimed responsibility for the attack targeting Saad, two months after he was appointed at his post. Yet, it does not mean that IS is the only source of chaos. There are multiple factions and armed groups that engaged in the fighting against former President Ali Abdullah Saleh’s forces and the Houthis last year, and they have demanded to obtain what they perceive as merits. Ansar al-Sharia is demanding the establishment of what the group calls an “Islamic Emirate,” while the Southern Movement calls for the re-establishment of South Yemen as an independent state.

Despite the robberies and killings of security and military officers — some of which IS claims responsibility for, while the source of other incidents remains unknown — Saad’s assassination has shocked the coastal city’s residents, as it delivers the message that insecurity has defeated one of the most important government officials after Hadi in Aden.

One day prior to the assassination, Mohsen Mohammed Farhan, president of the Criminal Court in Aden, was assassinated in Aden, which was invaded by Saleh’s forces and the Houthis in March 2015, before the Saudi-led coalition and pro-Hadi armed groups engaged in fierce battles to recover it.

Aden — whose residents have taken up arms in light of the ongoing battles in the city — has turned into a scene of bloody operations conducted in broad daylight.

These variables have required that Hadi, the head of his government and some ministers change their transportation habits. Hadi has been moving by helicopter between the presidential palace and the strategic port of Aden, which is less than a 30-minute drive away.

A senior government official, who asked not to be named, told Al-Monitor, “The local authority in Aden is taking measures to limit security chaos.” He said that such measures “have succeeded lately in partially establishing security and halting the escalation of terrorist attacks.”

The official spoke of “a security plan [that is being implemented] in cooperation between the local authority, the Yemeni army and the Saudi-led coalition forces stationed in Aden.”

On Jan. 3, Yemen’s new Gov. of Aden Aidroos al-Zubaidi, who was appointed on Dec. 7, along with three senior officials survived a suicide car bomb attack that targeted their convoy and killed three guards in Aden.

Local officials in Aden said a suicide bomber in a car bomb blew himself up while the convoy of Zubaidi, Security Director Gen. Shalal Ali Shaye'a and Lahij Gov. Nasser al-Khabji drove past.

Following the attack, the authorities imposed a curfew from 8 p.m. to 5 a.m. in the city, until further notice.

This security measure, however, has not prevented the assassination Jan. 5 that targeted a member of Aden’s local council, Mahmoud al-Saadi, from taking place. An eyewitness said that gunmen riding a motorbike shot dead Saadi in Sheikh Othman.

Following each of the violent operations, security authorities in Aden make arrests against a group of vendors hailing from the northern governorates, claiming that some are informants and members of sleeper cells that are undermining the governorate stability.

Earlier this month, violent clashes erupted between the Yemeni army and armed formations, which claimed to be a part of the Southern Resistance forces and refused to hand over the Aden International Airport and the port of Aden to the Yemeni government. In March 2015, Houthi gunmen had taken control of these two important facilities, before they were defeated in a military operation that killed one civilian and injured three others.

In October, Yemen’s Prime Minister Khaled Mahfoudh Bahah was forced to move to Saudi Arabia, after his residence and Saudi-led coalition military sites were targeted in four explosions, which IS claimed responsibility for, and killed 15 people, including four soldiers from the United Arab Emirates.

IS emerged in Yemen with the outbreak of the civil war in early 2014. Its name emerged next to that of al-Qaeda in the Arabian Peninsula (AQAP), although there has been no apparent coordination between these groups.

The current government has not fulfilled the promises made after the Houthis were expelled from Aden in the summer of 2015. Most notably among these promises are the reconstruction and the restoration of security. The residents believe that violence is triggered by the Houthis at times, and by extremist gunmen at other times, while the authorities are clearly absent.

Saeed Abdullah, a journalist covering the Islamic group’s affairs, told Al-Monitor, “There is no doubt that Aden’s security situation is of a great challenge.”

He said, “The vulnerable security situation did not emerge all of a sudden. It has worsened because of the war and the entry of Shiite Houthi militia into Aden, which motivated and provided armed groups, such as al-Qaeda and Ansar al-Sharia in Aden, with a populist dimension."

Abdullah expected that al-Qaeda, Ansar al-Sharia and IS back away as the “absence of a sectarian stimulant in the southern parts — namely represented by the Houthis who embrace Zaidism — and a territorial stimulant, namely the army under the authority of Sanaa, caused armed groups to lose an important popular cover, and placed it into a direct confrontation with local communities. This is why these groups have returned to square one, by conducting assassinations and bombings.”

IS gunmen stormed the University of Aden in late October and fired in the air, demanding to prohibit the mixing of women and men.

On Jan. 10, unknown gunmen shot dead a colonel from the Political Security Organization. A press source told Al-Monitor on condition of anonymity, “Gunmen riding a motorcycle shot dead Ali al-Nakhibi in al-Mansoura, in the center of Aden. The gunmen, however, were able to escape the crime scene.”

Islamist extremists are setting up checkpoints in some parts of Aden at night, and they have been able to impose their complete control over large parts of Hadhramaut governorate in eastern Yemen.

Yemenis are unsure of what the future holds for them as chaos surrounds them. Meanwhile, international organizations are sounding the alarm as to the deteriorating humanitarian situation in Yemen, while the government watches helplessly.