Two years after Houthi rebels were expelled from Aden, Yemenis are fleeing the port city as militias and extremists are increasingly targeting activists, intellectuals and anyone opposing their views. 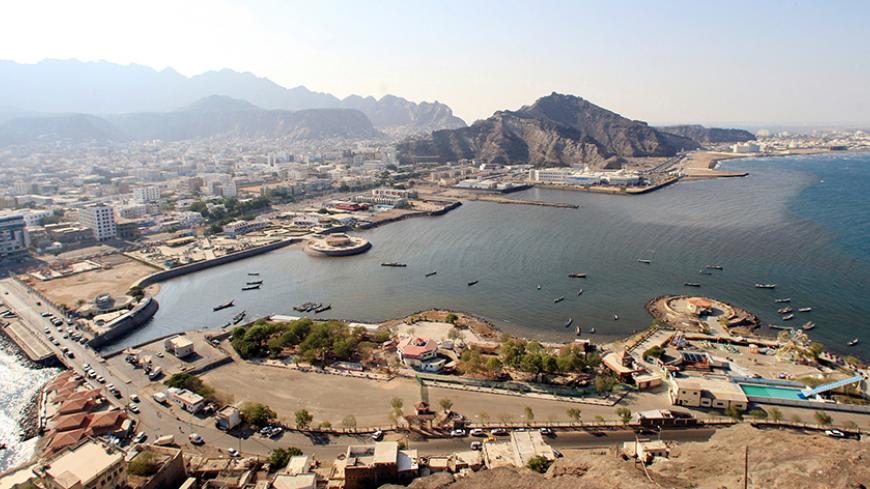 SANAA, Yemen — During its modern history, Aden has represented a unique model for coexistence and tolerance, as it is the only city in Yemen housing citizens from all regions, religions and races. But its history has been put to the test like never before.

Since the Houthis and former President Ali Abdullah Saleh were expelled from Aden in July 2015, following 3½ months of bloody battles with forces loyal to President Abed Rabbo Mansour Hadi, who is backed by the Arab coalition forces, Aden’s openness has declined amid the takeover of extremist groups such as the Islamic State (IS), al-Qaeda and the Salafists.

On May 15, an anonymous armed man shot activist Amjad Abdul Rahman, 21, in the head, killing him instantly inside an internet cafe in Aden's Sheikh Othman district.

A close friend of Rahman’s told Al-Monitor on condition of anonymity for fear of jeopardizing his life, “Amjad was threatened by Salafists who accused him of atheism. They told him that his life would be at risk unless he repented.” Rahman was a member of a cultural club called Al-Nasieh, which was established by secular citizens and intellectuals in 2016. The club discusses religion and women’s rights, which extremists consider prohibited.

After his assassination, armed men in a military vehicle affiliated with Salafist Imam al-Nubi, the commander of a security camp called Liwaa 20, blocked the road in front of Rahman’s funeral procession and prevented his burial, under the pretext that he was an infidel who should not be buried in a Muslim graveyard.

On April 25, 2016, Omar Batweel, a 17-year-old Yemeni activist who opposed religious extremism, was also shot dead in al-Mansoura district in Aden. The victim had received letters accusing him of atheism and telling him he would be killed. Batweel was found drenched in blood in the street, and the incident shook the Yemeni people.

On June 3, activist Mohammad Kheir Othman, 17, was assassinated while leaving a sports stadium in Breiqa district. An unknown person shot him in the head. The way he was killed resembles that of Batweel and Rahman, although there is no proof that extremists carried out the assassination. Othman was not known to the public, which perhaps pushed investigations into his death into the background.

Tawakkol Karman, a Nobel Peace Prize winner and activist, told Al-Monitor, “The situation of freedom of expression, thought and belief has become horrendous in Aden. Extremists have blended into the Security Belt Forces that are funded and managed by the United Arab Emirates and that control the security situation in south Yemen. These forces are keeping mum about the murders and they might even be giving the operations their blessings.”

The Security Belt Forces were founded in spring 2016. They are officially affiliated with Yemen’s Ministry of Interior, but their funding and command come from the UAE. Human Rights Watch said that these forces have strayed too far from the Yemeni government’s authority, and they control at least two unofficial detention centers in Aden and have tortured and arrested many people.

Most ministers of the Yemeni government live in Riyadh, and their absence has fed the weakness of this government and encouraged the rise of militias and extremists clamping down on freedoms and religious beliefs.

Nasma Mansour, a civil engineering student at the University of Aden, told Al-Monitor, “Murder in Aden has become commonplace and is given strange justifications. I know somebody who was killed for being reportedly gay.”

She added, “Activists have been leaving Aden one after the other. The situation is tense, and my family has forbidden me from leaving the house because of the dangerous situation.”

Mansour said that freedom of thought in Aden “is long gone. If you criticize religious groups, you are an atheist. If you criticize the weak local authority, you are definitely an Islah Party member [in reference to the party’s affiliation with the Muslim Brotherhood]. If you attack the Southern Movement — an armed faction seeking the independence of south Yemen — then you are an agent and advocate of Saleh. The accusations against activists are ready-made and each party is willing to go to extremes against its opponents.”

Failure to instill order and security in Aden reflects how hard it will be for Hadi to keep his promises of regaining control of all the cities that the Houthis took over.

Activists in Aden accuse Islamists of waging war on them. It is difficult though to pin down the party responsible for the attacks, given the numerous armed groups such as al-Qaeda in the Arabian Peninsula, IS’ Yemen wing and the prevalent Salafists.

Mohammad Ali told Al-Monitor that he left Aden along with 10 other young men for fear of assassination. Ali, a writer, escaped to India on Dec. 29, 2016, after two people, one of whom was hooded and the other carried a gun that produced muffled shots, tried to kill him.

He added, “I know three activists who are still in Aden. Nobody is pursuing them, but I fear for them from extremists.”

A teacher at the University of Aden told Al-Monitor on condition of anonymity, “Regardless of who is responsible for this systematic clampdown on the freedom of belief, it seems that regaining security and stability in Aden is not a priority for the Arab coalition forces. This jeopardizes the credibility of the coalition before the Yemeni public.”

Amal Mohammad is a media activist who arrived in Sanaa from Aden four months ago with her husband and child. She told Al-Monitor that she had been threatened and left Aden out of fear, but that she continues to write on her Facebook page about freedom of thought and to criticize radicalism.

Mohammad, who worked at the Aden public media office, misses her family, but returning to Aden would be dangerous. She said, “The party that threatened me is the same that killed Batweel. This was mentioned in the threat I received on Facebook

Hadi’s grip on Aden is loosening, while extremists and armed militias are gaining ground. The situation worsened after Aden’s governor, Aidaroos al-Zubaidi, was dismissed April 27. Hadi’s decision sparked the Southern Movement’s secession calls, in the hope of establishing a self-rule authority in south Yemen, which had been an independent state until 1990.

Zubaidi is one of the leaders of the movement calling for secession. When Hadi decided to dismiss him, the Southern Movement considered that a way to target Zubaidi's project for secession.

Amid all this chaos, Yemen is facing its worst days. The civil war has killed 10,000 civilians since 2015, while diseases like cholera have claimed the lives of those who escaped the conflict. Meanwhile, the ghost of famine lingers, threatening the lives of 20 million Yemenis.