Separatists in Aden, South Yemen, have engaged in deadly clashes with security forces and pro-unification protesters from the Islamist Islah Party and have renewed calls for secession, complicating Yemen’s fragile transition, reports Vivian Salama from Aden. 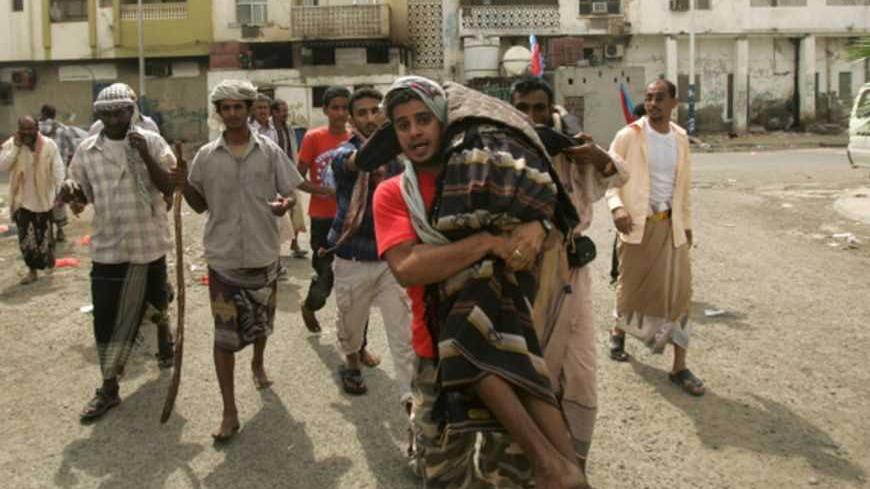 A supporter of the separatist Southern Movement is carried to an ambulance after he was injured during clashes with security forces in the southern Yemeni port city of Aden, Feb. 21, 2013, ahead of planned rallies to mark the first anniversary of ex-president Ali Abdullah Saleh's ouster. - REUTERS/Khaled Abdullah
Vivian Salama
March 1, 2013

ADEN, Yemen — With two weeks to go until Yemen’s crucial national dialogue, aimed to set in motion transitional imperatives like writing a new constitution and scheduling parliamentary elections, tensions are rising between North and South Yemen as Southern separatists renew their calls for secession.

Separatists in Aden, the capital of South Yemen, engaged in deadly clashes with security forces and pro-unification protesters, mainly from the Islamist Islah party, claiming that the state has — and will continue to — ignore their pleas for basic rights. Tents returned this past year to Martyrs Square in the Mansoura section of Aden, and the Southern flag has grown increasingly visible on the streets and in graffiti art. Slogans spray-painted on the walls of government buildings read “Freedom for the South.”

Separatist demands have long been a major facet of Yemeni politics, however the popular uprising that ousted President Ali Abdullah Saleh last year ignited a wave of protests among Southerners who previously faced persecution for expressing sentiments that undermined the country’s delicate unification. Yemen’s new president, Abd-Rabbu Mansour Hadi — a Southerner himself — made a surprise visit to Aden this week to hold talks with the leaders of various factions. However, Hiraaki [Southern Separatist Movement] activists dismissed the visit as political theater, pointing to visits Hadi made to the United States, Saudi Arabia and other Gulf States in his first year in office, before ever visiting the Southern capital.

Sensitivities over Southern secession were particularly apparent during Hadi’s visit as police checkpoints erected large Yemeni flags and Southern flag graffiti was partly painted over to show only the red-white-and-black colors that represent the unified Yemen flag.

“We were expecting things will change with President Hadi’s visit, but it didn’t calm anything,” Maged Mohsen Fareed, 22, a college student and Hiraak member who has been jailed repeatedly for his activism. “It is as if he gave security forces green light” to attack.

Originally scheduled for mid-November, Yemen’s National Dialogue has been repeatedly delayed, more significantly due to differences Southerners had over the proposed groundwork. Some leaders with the Southern Separatist Movement, known as Hiraak, have said they are willing to join the talks from the start, but more hardline factions, led by Ali Salem al-Baid, have refused to engage, saying that their demands have not — and will not — been met by Sanaa. The talks are now scheduled for March 18, however, the recent tensions in Aden have raised concerns that even those who are willing to take part in the talks will be swayed against it.

“To us, there is no dialogue with murderers and we will not talk with murderers,” said Abdulhameed Darwish, a Hiraaki activist whose brother Ahmed was gruesomely tortured to death in police custody in 2010, sparking fury across the South. “Until today, my brother’s case is still on hold in the courts. Nothing has changed. The situation is going from bad to worse.”

For many Southerners, the dream of unity mapped out during unification talks in 1990 is now a pipe dream.  The country’s brutal 1994 civil war left a major scar in the psyche of some in the South, particularly in the absence of any reconciliation talks. Many point to the issue of Northern hegemony as one of the biggest issues since unification. Women activists in Aden say they had more opportunities for education and jobs prior to the infiltration of conservative Northern culture.

Northerners — particularly those who were loyalists to then-President Saleh — also received privileges in terms of access to local power, land and jobs. Until recently, the governors of all six Southern governorates were Northerners. Last week, Hadi named Southern Islamist politician Waheed Ali Ahmed Rasheed as the new governor of Aden, however, many dismissed the selection as Rasheed is considered an advocate for continued unification.

“In the past, our problems were jobs, careers, security, electricity, etcetera, but now all talks are about regaining the independence and state of the South,” said Tarek Al-Fathli, a tribal chief from the Southern governorate of Abyaan. “Let us die of hunger — just give us back our state and we will be fine. After that, whether we build economy, beg for food, kill each other or whatever, we are responsible about our lives and our people.”

Most significantly, Southerners blame central government neglect for the deterioration of security, particularly in the Abyaan province, where al-Qaeda militants have engaged in a bloody battles with security forces in recent years, crushing local villages and killing many innocent civilians in the crossfire.

However, Hiraakis have an uphill battle. Several international entities increasingly frown upon the idea of a separate Southern state, even as the central government in Sanaa claims it will work toward fulfilling the demands of the South. Friends of Yemen, a ministerial-level group formed to boost international political support toward Yemen, has repeatedly rejected calls for secession. The movement’s leader, al-Beidh, who is currently living in exile in Beirut, has even been threatened with sanctions by the UN security council if he continues to interfere in Yemen’s democratic transition. Al-Beidh has been accused of accepting money from Iran to support his cause, as well as recruiting members of al-Qaeda.

Yemen needs “either unification with decentralization, local governance with full authority, or federalism with more than two regions, which I think it is a bad solution,” said Fekry Mansour Muhammed Aydh, director of the Islah party division of students affairs in Aden. “If I feel as an Islah youth that secession will guarantee me diversity and freedom of opinion and political beliefs, I will be the first one to support separation.”

Vivian Salama has spent much of the past decade reporting in the Middle East for Bloomberg News BusinessWeek, Time, Newsweek, The Washington Post and USA Today, as well as academic journals. She also has appeared as a commentator on the BBC, France24, Bloomberg TV, TV New Zealand, CBS News, among other outlets. She covered the recent revolutions in Egypt, Libya, Yemen, Bahrain and Syria.