Activists from the Southern Mobility Movement in Yemen claim that Sanaa is exploiting rumors of al-Qaeda activity in the south to delegitimize their cause. 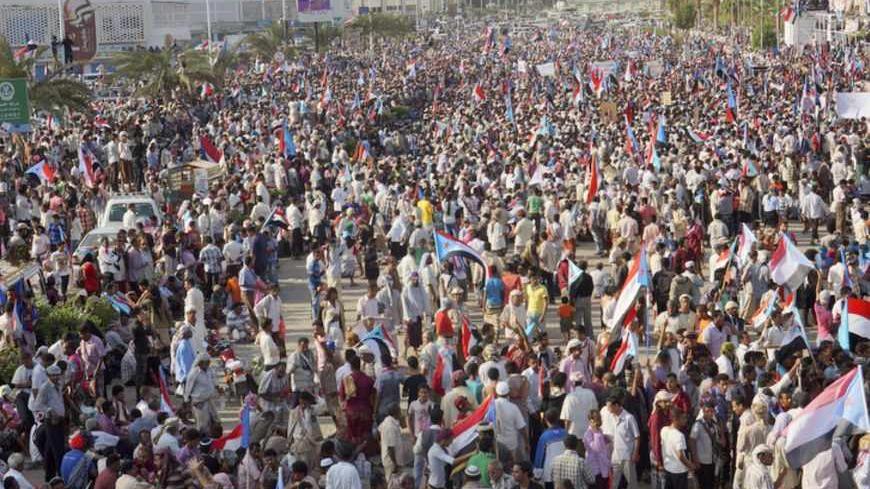 In the past few days [May 21-29], South Yemen has been the scene of political, security and military developments that have captured the attention of Arab and international media. As the Yemeni regime was celebrating the 23rd anniversary of Yemeni unity between the North and the South, the Southern Mobility Movement (SMM) organized a million-man demonstration in Freedom Square in the city of Aden in South Yemen, marking the 19th anniversary of the Declaration of Disengagement between the Democratic Republic of Yemen (South) and the Yemen Arab Republic (North). The gathering was described as the largest in the history of the South. Supporters of "disengagement" or secession from the North came from different areas of the South despite the heat in Aden, the former capital of the South.

A few days after the million-man demonstration, the Yemeni authorities announced on May 24 that they uncovered a plot by the al-Qaeda-affliated Ansar al-Sharia to capture the town of Ghayl Ba Wazir in Hadramout Governorate, southeast of the country, and declare it an Islamic emirate.

In 2011, Ansar al-Sharia captured the cities of Zanzibar, Jaar and Shakra in the southern governorate of Abyan, and the city of Azzan in the Shabwa governorate. They were expelled by the army in mid-2012.

The Yemeni authorities did not provide further details about the "plot." They warned al-Qaeda of a fate similar to that suffered by its militants in the Abyan governorate, in the towns of Abyan, Shabwa and Bayda. The army was able to restore control of these areas after they were declared to be Islamic emirates by al-Qaeda in 2011.

The Saudi daily Al-Hayat cited Saudi security sources as saying (on May 26) that investigations conducted by Yemen's National Security Agency (NSA) on an al-Qaeda cell in the Ghayl Ba Wazir district led to the discovery of the al-Qaeda plot to capture the town. The organization planned to take advantage of the security chaos that resulted from the protests organized by SMM activists — supporters of former Vice President Ali Salem al-Beidh, who demands secession or disengagement.

In an exclusive interview with Al-Monitor, Ahmad al-Rubaizi, an information officer at Beidh’s office, denied the presence of such a plot. He said it was an attempt by the Yemeni regime to hit back at the SMM million-man rally and mobilize international support to provide assistance in the war on terrorism, with the aim of acquiring financial aid and more political support. Rubaizi added that Yemeni President Abed Rabbo Mansour Hadi is pursuing the same policy as his ousted predecessor Ali Abdullah Saleh.

In the battle against Ansar al-Sharia in Zanzibar and Jaar, Rubaizi said that it was the “popular committees” of Lawdar — comprised of youths, formed by the residents, and supported by merchants — which played a key role in expelling these groups and defeating them at the gates of the city in the Abyan governorate. He noted that the Yemeni authorities, represented by southern officers in the Yemeni army, took advantage of the popular committees’ need to defend their city, and thus provided them with ammunition and arms under the supervision of Hadi, tribesmen in Abyan and SMM youth in the central region. He added that the steadfastness of the popular committees encouraged the retreating Yemeni army to take the initiative to attack these groups in Zanzibar and Jaar, while [army] camps were being surrendered to al-Qaeda groups with little resistance.

Rubaizi believes that Hadi’s warning of the fall of cities in Hadramout into the hands of al-Qaeda is in fact a threat to hand over these cities to Ansar al-Sharia — similar to the policy adopted by his predecessor Saleh — which is a threat to the southerners who demand disengagement [from the North].

In turn, Sheikh Ahmed Ba-Muallim, head of the Supreme Council of the Southern Movement in Hadramout, denied the presence of al-Qaeda in the cities of Hadramout. He said that the publishing of reports about al-Qaeda’s control of cities in the governorate is an attempt "to downplay the significance of the million-man rally held on May 21 to mark the 19th anniversary of the Declaration of Disengagement and the restoration of the South, a wonderful scene that captured the attention of the world."

He added that the purpose behind these “rumors” that al-Qaeda has controlled cities in Hadhramout is "to spread fear regionally, internationally and in the Arab world of dealing positively with the legitimate demands of the people of the South — liberation, independence and restoring the [southern] state — in order to extend the occupation of the South."

Ba-Muallim said, "The Peaceful Southern Movement is in full control of the geographical area in the south, and there is no presence of the so-called al-Qaeda and Ansar al-Sharia, except inside government camps and the security administration that sponsors these groups." He noted that Ansar al-Sharia is affiliated with the Yemeni army, operates under its sponsorship and is present in [the army] camps in the south.

As for the presence of al-Qaeda in southern Yemen, Rubaizi said, "Some [al-Qaeda] groups were present in the South. If we take a closer look at their composition or members, we find that most of them were born or had lived in Saudi Arabia, some lived in the North after their parents escaped the Marxist regime in the North in the 1970s, and most are ex-employees in the former national security [apparatus] in the North. Many are also Arab Afghanis from several countries such as Saudi Arabia, Libya, Algeria, and Yemeni northerners from Marib, Bayda and Taiz."

"In fact, these [elements] gathered in the South under the patronage of former President Saleh, Sheikh Abdul Majid al-Zindani, and their known sponsor and protector, Maj. Gen. Ali Mohsen al-Ahmar."

Do the people of the South really seek independence from the North, and is this possible?

In an exclusive interview, Al-Monitor asked Ambassador Qassem Askar (Gibran), secretary-general of the Council of the Southern Movement, whether all currents within the Southern Movement support "disengagement" or if some call for federalism or unity. In response, Askar said that there is only one current in the South, which calls for secession and the restoration of South Yemen. He noted that the other demands do not enjoy popular support and are advocated by a number of former leaders who have started to back down from their calls for continuing unity or federalism under popular pressure (in reference to former President of the South Ali Nasser Mohammed, former Prime Minister of the South Haidar Abu Bakr al-Attas and Abdul Rahman Al-Jifri, among others).

Askar told Al-Monitor that he, Ba-Muallim and his deputy Ali Ba-Thuwab had visited Beirut to meet with former southern leader Beidh to discuss the situation in the South and the future of the SMM.

Ba-Thuwab told Al-Monitor that the million-man demonstrations held by the southerners call for independence and the liberation of the South, and reject federalism and unity. He said that this struggle began on July 7, 2007, which resulted in martyrs and victims, and the imprisonment of leaders and figures of the movement. He added that these demonstrations were mobilized in the governorates of Aden, Lahij and Abyan, out of six governorates in the South with a population of about 5 million.

Ba-Thuwab said that when some neighboring countries (in reference to Saudi Arabia) saw the rising power of the Southern Movement, they pushed southern figures, that is, Attas, to call for a federal system, in order to contain the call for disengagement from the North to save its interests.

Attas started to back down from his call for establishing a federal system and to call for independence and disengagement when he saw that his request for a federal system was not accepted by the people of the South, said Ambassador Askar.

Askar said that the Yemeni regime is still employing violence and force against the Peaceful Southern Movement. He added that the regime has perpetrated massacres against demonstrators, still uses gunfire to crack down on protesters and besieges towns that witness any movements, demonstrations or sit-ins. He noted that the authorities cut electricity and water in these areas as punishment.

He said that the previous mass arrests of southern activists are still ongoing, however to a lesser degree, and target leaders and cadres. He noted that the authorities are instead resorting to the assassination of activists in the Southern Movement, which is happening almost on a daily basis. He said that they (Askar, Ba-Muallim and Ba-Thuwab) were detained for over two hours before they traveled to Beirut.

Bu-Thuwab said that the Yemeni authorities divided Yemen into seven military regions, four of which were designated in the South, where 70-80% of the “occupying” Yemeni army is present.

On his expectations about the future of the Southern Movement and its chances of success, Askar said that there is a shift of position by the international community toward the issue of the South. He said that the coming months, especially September 2013, will see a shift in the international position toward the issue after the conclusion, and failure of the National Dialogue Conference.

Ba-Thuwab referred to a meeting on May 23 between President Beidh and Jerome Kochhar, chargé d'affaires at the French Embassy in Beirut. Beidh informed Kochhar about "the suppression and abuses being suffered by the people of the South, and the attempts to wipe out their identity and steal their resources since the occupation of the South in the war of summer 1994, and their peaceful struggle shown by the millions who gathered in Aden on May 21."

Askar revealed that recent contacts were made between the leadership of the Southern Movement and a senior US official, along with a senior German official. He pointed out that prospective meetings will be held with a representative of the UN Secretary-General Ban Ki-Moon and Western officials to discuss the future of the South.