Farea Al-Muslimi reports on the challenges in Yemen's Abyan province, revealing the longstanding divide between the country's north and south. 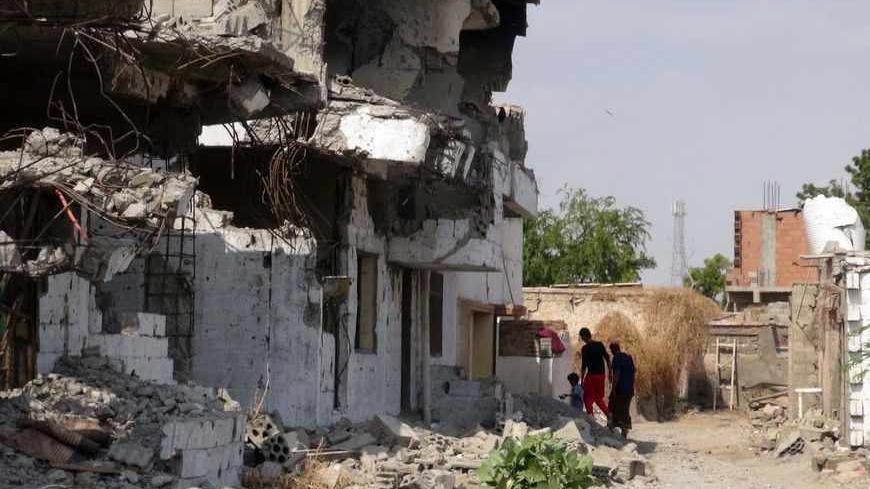 ZINJIBAR, Yemen — Last June, the Zinjibar town souk in Abyan province felt like an ancient cemetery. Footsteps were the only sound to be heard, and those who dared to brave the minefield left by al-Qaeda in the Arabian Peninsula did so with caution.

Today, the souk is vibrant like any other local souk in Yemen. Boisterous sellers and buyers passionately negotiate prices on every imaginable ware and crowds overflowing from the stalls make it very difficult to get by.

But the houses around the souk remain as they were almost a year ago. Traces of the destruction and damage from battles remain. Artillery and missile-strike scars still mark houses and buildings. So do handwritten numbers from government committees designating structures to be rebuilt; such plans, however, remain unrealized.

Local discontent with the government for not working hard enough to rebuild the town is greater than ever, challenging central government claims of victory. Such sentiment is particularly striking in places such as Abyan, the home province of the president and his defense minister.

The government has brought back electricity and water to damaged towns in this southern province, and some hospitals are again serving the public. This is the case in Zinjibar, site of the heaviest battles. In Jaar, the main hospital, once targeted by drone strikes for treating injured al-Qaeda in the Arabian Peninsula (AQAP) troops, functions again with the assistance of the Red Crescent.

The post office headquarters, a makeshift hospital for local citizens during the war, now functions as it was meant to. That, however, has not calmed the local populace nor made it satisfied with government efforts in the province, particularly when the government did not reopen important offices such as those dealing with public education. Dozens of schools are still closed.

Public committees that fought alongside government forces against AQAP have filled the void left by absent authorities. Public committees are now the absolute and unquestionable power brokers in the province. They do not don uniforms, and look like other ordinary citizens save for the AK-47s they carry at self-administered road checkpoints around and inside towns. Their forces guard governmental institutions and buildings, and arrest and jail suspected AQAP members around the province. The Interior Ministry’s security forces, which usually serve as the police force in Yemeni towns and cities, remain absent.

While the public committees administer all four branches of the government, they have not won widespread public support. Adel al-Sayed, a youth activist in Abyan, complained, “If I have a problem with public committees, there is no higher authority to complain to.” Adel blamed the government for not taking control of the town. Like most people in Jaar, he praised the end of the war, but said the [AQAP-affiliated] Ansar al-Sharia’s brand of social justice was much more responsive: “If you had any sort of problem when Ansar al-Sharia was running things, it would have been solved the same day; now it will not be solved for decades,” he said when asked about the difference between now and 10 months ago. [In October, the US State Department labeled Al-Sharia as an alias for al-Qaeda in the Arabian Peninsula.]

The fear in Abyan is not just of the rising power of the public committees, but of divisions in their ranks. “We are worried that their divisions are growing, especially in Zinjibar, and they are all armed,” said Nadheer Kandah, a local political activist in Abyan.

The power struggle within public committees can be another source of armed conflict because it consists of leaders from different tribes that have disputes. Kandah also said public committees have conducted public executions of local citizens accused of assisting al-Qaeda without proof, and without any legal procedures. Adel, likening the public committees to AQAP, said the government “pushed out one group, but brought another one.”

Reinforcing Abyan residents’ discontent and their lack of confidence in the central government is the governor’s practice of rarely coming to his office in Zinjibar, the provincial capital, but instead working from his fortified beach house on the edge of the province, closer to the southern port of Aden.

The power vacuum and discontent with the absent central government has given the powerful southern secessionist movement Hirak political room to proliferate throughout the province. Hirak has been recruiting new members, amplifying its animosity with the central government and in general asserting its agenda. AQAP flags and graffiti once prevalent around Jaar and Zinjibar have been replaced with the southern movement’s flags and graffiti blasting the central government. In the last few months, Hirak became active to the extent that it held pro-independence rallies and protests in many parts of Abyan.

While the central government established a special fund to rebuild Abyan soon after the battles were over, Gov. Jamal al-Akil accused the government of “inaction and neglecting” the reconstruction.

Assistance is needed more than ever. More than 13,000 mines laid by AQAP that remain around the province have slowed the return of around 200,000 internally displaced peoples to the region. The displaced instead remain in shelters in Aden, where they fled in 2011. Demining cars continue driving around the roads and remote areas, digging for mines all day.

Nearly a year has passed since the government took over and AQAP militants distributed farewell flyers to Jaar residents to apologize for any harm caused. To date, the government has not compensated citizens or made apologies to any family that lost civilian relatives as a result of  Yemeni or US airstrikes. This is something many residents have expressed their anger and frustration about, especially those who lost their parents or guardians.

The road to Abyan has several military and public-committee checkpoints manned by underage soldiers who do not seem capable of repelling or countering any AQAP attempts to retake towns.

Locals, with most of their province still damaged, feel abandoned by the central government and the world. As former Abyan Gov. Ahmed al-Maisary expressed in Sanaa with clear frustration: “This was not the Abyan people’s war with AQAP, this was the world’s war in Abyan with AQAP, and we were left alone to face the consequences.”

Farea Al-Muslimi is a Yemeni youth activist, writer and free-lancer. His writings have appeared in Al-Monitor, The National, Foreign Policy, Assafir and many other regional and international media outlets. He tweets at @AlMuslimi.