My Village Was Attacked By US Drones in Yemen

Farea al-Muslimi writes about how Yemenis deal with the threat of US drone attacks and the US drone strike on the Yemeni village of Wessab on April 17. 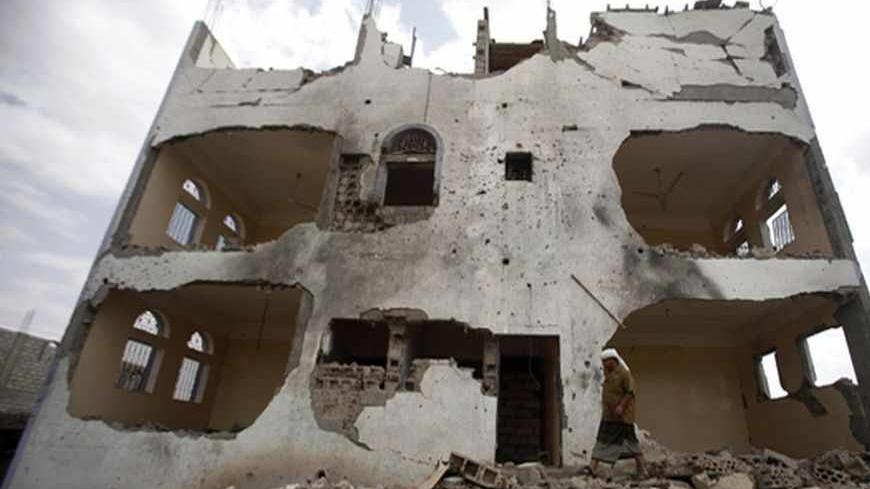 A tribesman walks near a building damaged last year by a US drone strike targeting suspected al-Qaeda militants in Azan of the southeastern Yemeni province of Shabwa, Feb. 3, 2013. - REUTERS/Khaled Abdullah

If you live in Yemen, the golden rule is to expect anything any time. That, however, does not include expecting your hometown village — one of the most peaceful and beautiful places in Yemen — to be bombed. The peacefulness of such a place makes you believe that no one has ever heard of it, let alone that it is bombed by a US drone strike at night.

That, however, is the reason that I received many messages from villagers on my two cell phones last night. They informed and asked me about a strike that had just taken place, and targeted a man named Hammed al-Masea Meftah, also known as Hammed al-Radmi — a name I wasn't familiar with as I have been away from the village over the last few years and have only returned for short visits once a year.

I was stunned by both the news of the drones and the fact that someone in Wessab, the Yemeni capital of misery with its beautiful mountains no one from outside remembers, had connections with al-Qaeda in the Arabian Peninsula (AQAP). The last time high-level governmental officials visited the village was in 2003, when the governor of the province attended an election rally and engaged in electoral fraud to help the ruling party candidate win.

The strike was the first in over three months and the first in the entire Dhammar province, which Wessab is part of. In the past, I had celebrated this respite, but it seems that the unwise US policy of drone strikes in Yemen has resumed, and in my village this time.

We used to think that drone strikes were a localized problem, with villages far from the Yemeni capital being spared. This is no longer the case. It seems no part of Yemen is safe from US drones. In an area like Wessab, there is nothing easier than capturing a man like al-Radmi. Two police officers would have been more than capable of arresting him.

As I learned later from friends and relatives, the man returned to Wessab with strangers in 2011. As soon as he did, locals went to the security headquarters in the area to report their suspicions about him. The security chiefs said that he was an ordinary man, and that there was no problem with him or even a single report about him. More so, he was close to local authorities and enjoyed strong connections with the security chiefs, who granted him legitimacy and power over the ordinary village men who were mostly weak and poor farmers.

Al-Radmi was killed, along with four others in his car. While DC policymakers will add this operation to their success stories by using the old narrative of comparing the number of dead to the number of targets in order to evaluate success, the reality is much worse than it seems.

But even beyond that, was it really necessary to conduct an operation that costs hundreds of thousands of dollars, while two soldiers could have captured the target? Locals who didn’t know al-Radmi had AQAP affiliations are now angry that they were in close proximity to this man and could have been killed with him. Had they known he was a target, they would not have even allowed him to stay in the village in the first place. More importantly, people like al-Dhafer Ali Muhammed who used to see al-Ramdi at the security and local government headquarters on a daily basis ask why not capture him and find out who is behind him? More importantly, he questions the fact that the government helped him grow such influence over the last few years and gave him their blessings.

In an area like Wessab, where schools are small and there are almost no good medical centres and asphalt roads, and where poverty is abundant but crime has almost been nonexistent over the last few years, effective counterterrorism comes not from the air but rather by building a hospital to decrease the number of women’s deaths that occur every day due to lack of medication. In other words, simply by having a decent government that provides for citizens rather than making coalitions with terrorists

I have many friends and family in Wessab who I regularly visit. This is now less of an option. Drones hover over the roads leading to my village and many others in Yemen. They make you look at the sky from left to right to make sure that you are safe.

If law isn’t practiced a few minutes away from the police station, how can people there trust justice and the government any longer?

If al-Radmi was a target, an arrest would have been simple. He was not some elusive figure, hiding far from the reach of the central authority. He lived a few hours from Sanaa and less than a kilometer away from government headquarters. Apparently, he was in the company of a government official at the time of the strike, having come from an area where they solved social problems together. Rather, what the drones have done is terrifying a village with thousands of the most modern people in Yemen.

At such times, it is tempting to conclude that the US has no interest in a measured response to terrorism. It is difficult not to think it doesn't matter to them whether they terrorize (and radicalize) entire populations as they check another name off their “kill list.” It is also unclear what my own government’s role in this slaying was — whether Yemeni officials knew in advance and stood by silently or whether they were racing to share responsibility for the killing to cover for the US. Both are problematic.

Drones have a tremendous psychological effect on those living in their shadows. Villagers say drones hovered over Wessab for three days before they struck. The ominous buzz of the drones terrorizes communities. Where will they strike? Will I be next? These are the questions youngsters now grow up asking.

The "collateral damage" of drones cannot just be measured in corpses. Drones are traumatizing a generation and further alienating Yemenis from any cooperation with the West, or even with the Yemeni central government.

Today, the vast majority of Yemenis do not support AQAP. Enough senseless killings, though I very much doubt that this will change. I also fear it is not a good idea for me to go back to the village, as in the past the villagers have associated me with the US as someone who believes in the American values and moved out of the village via generous American scholarships.

Whoever pressed that button thousands of miles away killed my longstanding counterterrorism efforts. All the US public diplomacy of me being America’s informal ambassador to an area that US officials cannot even locate on a map are now lost in this wreckage. Worse still, they made al-Radmi look like a hero.

The US continues to play with fire in Yemen by being inconsiderate and ineffective in its counterterrorism policies. With such behavior as its headline, it digs a grave for people like al-Radmi and more graves for any future peace in Yemen and the American values.

As the US continues to hold workshops to educate Yemenis in the capital on the rule of law — through its right hand USAID — it is killing them outside the law through its left hand, the drones strikes.

Farea Al-Muslimi is a Yemeni youth activist, writer and free-lancer. His writings have appeared in Al-Monitor, The National, Foreign Policy, Assafir and many other regional and international media outlets. He tweets at @AlMuslimi.