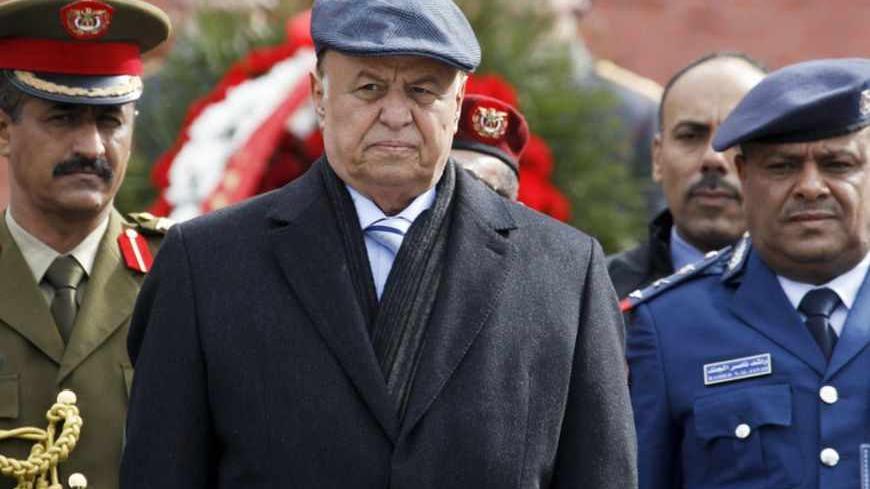 SANAA — “Thawra” (revolution) has been on the tongues of Yemenis for the past two years, but revolutionary changes tend to move at a glacial pace. For example, it took President Ali Abdullah Saleh nearly a year to agree to the 2011 Gulf Cooperation Council (GCC) deal on the transfer of presidential power. This past week brought an the exception to the rule when President Abed Rabbo Mansour Hadi hastened the pace of change with presidential decrees altering the political and military balance of power in Yemen. “Awe” was the most apt word to describe the atmosphere when it occurred. Indeed, most Yemenis could be heard uttering, “Finally,” in response to Hadi’s decision to reshuffle the military.

The presidential decrees not only fulfilled one of the key demands of the 2011 revolution, but also brought to a close the long-standing dispute, and outright armed conflict, between Ahmed Ali Saleh, eldest son of the deposed president Saleh and who headed the powerful Republican Guard, and Gen. Ali Mohsen al-Ahmar, who had earlier defected to protect protesters in 2011.

While Hadi’s decree removed the two dueling strongmen, appointed thirty new military leaders and concluded 30 years of Saleh-family domination of the Yemeni military, it also contained an important gesture to foster reconciliation between the Yemeni military and the Yemeni people. The First Armoured Division base, a sprawling headquarters that effectively served as the nerve center and staging ground for attacks against protesters in 2011, will be transformed into a public park.

Yet, recent history and jousting strongmen may not be so easily forgotten in Yemen. Ahmed Ali Saleh, while being groomed to take over from his father, had been appointed head of the country’s most elite force, the Republican Guard, and given several sensitive political and economic portfolios. In 2009, Saleh was tapped to implement the 10-point Agenda for transforming the political and economic landscape of the country in what many viewed as a ploy to brand him a reformer, bolster his engagement in economic policy, increase his popularity among the people and, most crucial, spread his role among assorted high-level positions domestically and firm up contacts with Western diplomats who largely supported the agenda. The former good friend of Said al-Islam al-Qadafi tried to learn from his legacy and perhaps Jamal Mubarak.

Meanwhile, Gen. Ahmar, a long-time confidante and ally of the deposed president Saleh prior to defecting, had led the First Armoured Division and maintained a close relationship with the Saudis (and more recently with Qatar). The popular protests of 2011 put the two strongmen on a collision course. Intermittent high-profile clashes between their respective forces brought life in Sanaa to a standstill and evoked tragic memories of the1994 civil war.

The fissure created two ambitious power brokers at odds with each other and the wishes of the peaceful protesters. Heavy fighting in 2011 carved up sections of Sanaa in a situation eerily reminiscent of the very real neighborhood-by-neighborhood frontlines demarcating East Beirut and West Beirut in the 1980s.

President Hadi was not spared the rivalry between the two men. From the moment he assumed office, Hadi playfully referred to his home as the "United Nations,” because he was largely unable to quell the violence between their factions. Hadi, following the Roman tactic of decimating an army to assure its inability to launch an attack, has been reining in both sides since he came to power following the GCC deal, but also resorted to raising his own forces in 2012. Thus there emerged three powerful factions in the capital.

Hadi's recent decrees, however, mark a shift toward a more unified army than at any other time during his tenure thus far. While the army as a whole may still be weak, corrupt and lack cohesion, the presidential measures represent a positive stride toward a more-inclusive and less-fractured institution. Perhaps more than anything, the reshuffling will bolster Hadi's political capital and credibility as a capable leader immune to the wills of Ahmar and Saleh. Ahmar will now serve as an advisor to the president, while Ahmed Ali will join the slew of other Salehs in diplomatic positions around the world when he assumes the role of ambassador to the United Arab Republic.

The assertive decrees have an echo beyond elite politics in Yemen. In the past, military control and support formed the bedrock of political power in the country, but Hadi's decrees could mark an important shift toward a new political-military relationship. The impact potential was particularly apparent at the National Dialogue conference, the umbrella under which Yemeni actors are debating the future of the country for the coming six months. Prior to the decrees, the conference enjoyed little confidence because of the belief that the different factions could easily use force to gain what they could not gain peacefully in roundtable discussions.

Confidence in Hadi, too, has been far from solid since to date he has not fulfilled the 20-point plan for preparing the country for the National Dialogue. The points primarily pertain to the situation with the south. Delays in the dialogue raised the ire of the factions, but the removal of the two military strongmen opens a window of opportunity to engage all movements. The chance to implement the 20 points is now better than ever.

Broad international support is perhaps one of the least discussed aspects of the recalibration of the political-military power balance. While Hadi’s decision bears little semblance to Saleh’s political domination of the country prior to the transition, there are concerns that Hadi’s newfound credibility may be used to delay the transfer of power beyond February 2014, when elections are scheduled to take place. According to the GCC plan, Hadi retains final say in any decision on the transition of power. Furthermore, the absence of viable competitors, Hadi's background as a southerner unaffiliated with the northern tribes and widespread international support could translate into there being few obstacles to a proposal to delay elections. Today, postponement also seems more likely than ever given the slow progress by the Supreme Commissions for Elections and Referendum to prepare the country, not to mention the need for widespread voter registration and renewal programs.

Beyond all this, the most dangerous aspect of the reshuffling is the country's habit of keeping all its eggs in one basket. This is currently reflected in the absence of a vice president. To date, President Hadi has not filled the position, so it is unclear what would happen in the event a tragedy struck. In Yemen, such concerns are not unwarranted. The threat to Hadi’s life has increased now that more traditional actors are enraged. Hadi’s decision to end three decades of Saleh domination of the Yemeni military may reunify the tribal village against him. The legacy of tribes “unifying with the brother against the cousin and with the cousin against the stranger” is tried and true in Yemen.

Perhaps what evolves in Yemen will resemble the classic cinematic scene of relatives hugging each other, tears in their eyes, regretting the differences that had weakened them and allowed a stranger to exploit them both; they then soon begin plotting their revenge. At the end of the day, Yemen is a country where many movie-like things happen. The Hadi reshuffle seemed possible only in the movies a few years (and even a few months) ago.

Farea al-Muslimi is a Yemeni youth activist, writer and freelancer. His writings have appeared in Al-Monitor, The National, Foreign Policy, As Safir and many other regional and international media outlets. He tweets at @AlMuslimi.