In a Cabinet reshuffle, Yemeni President Abed Rabbo Mansour Hadi issued a presidential decree that replaced the ministers of interior, oil and most importantly, the head of Yemen’s Political Security Office. 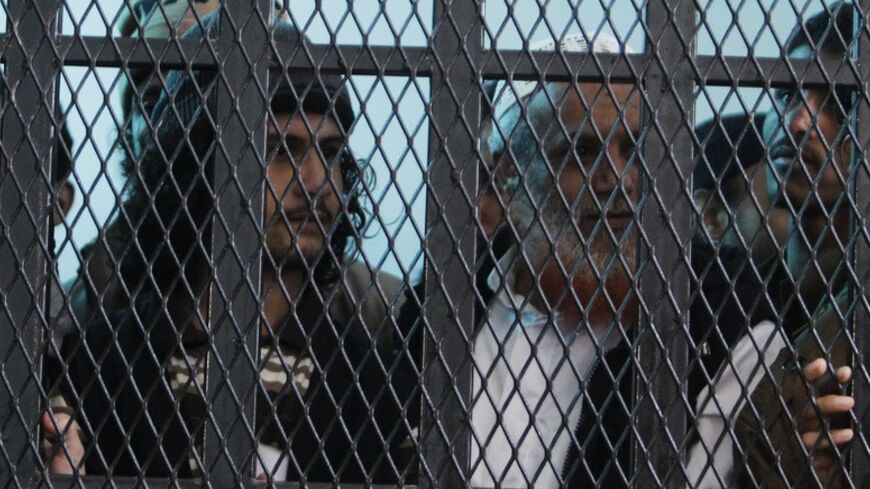 Defendants look out from their holding cell in a state security court of appeals in Sanaa, Dec. 31, 2013. They were among 10 suspects charged in a May 2012 suicide attack on a military parade. - REUTERS/Khaled Abdullah

On March 8, Yemeni President Abed Rabbo Mansour Hadi conducted a security and government reshuffle targeting certain important ministries and security agencies. The decree sacked the unpopular minister of interior, appointed a new minister of oil, but most importantly, got rid of Yemen’s strongest and oldest intelligence leader. Ghaleb al-Qamish, who for more than three decades was in charge of Yemen’s intelligence agency — the Political Security Office (PSO), and before it the National Security Agency — woke up on March 8 no longer the most renowned intelligence officer of Yemen.

The sacking of Qamish and appointment of a younger officer from National Security as his replacement was one of president Hadi’s strongest and most welcomed presidential decrees since he came to power in 2011. Qamish, a descendant of one of Yemen’s strongest tribes, was Yemen’s scariest man and had been in charge of destroying every political movement, party, individual or organization that challenged former President Ali Abdullah Saleh’s power.

For decades, he smashed nationalists, socialists, communists and reformists before being handed al-Qaeda in the Arabian Peninsula’s file (AQAP) for a few years until he had to share it with another security agency — one created at the urging of the United States to combat AQAP in Yemen.

In the ’80s and ’90s, the PSO, under the leadership of Qamish, coordinated the recruitment of jihadists and their travel to Afghanistan to fight the Soviets — all with the blessings of Saudia Arabia and the United States. Later, when al-Qaeda became the new enemy, Qamish happily took the lead in fighting their members in Yemen and partnering with US agencies like the FBI and CIA in the war on terrorism.

However, Qamish had trouble escaping his past. It wasn’t too long before the United States discovered some of Qamish’s officers were working part-time against al-Qaeda and part-time for it. One of Qamish’s strongest officers, Abdul Salam al-Hilah, was discovered to be working with al-Qaeda in 2001;he was set up by the United States, went to Egypt and was arrested and taken to a US prison.

Soon after 2001, the United States concluded that the PSO was no longer capable of countering al-Qaeda. The United States wasn’t happy, but neither was former President Saleh. By that time, Saleh was already preparing his son, Ahmed, to take power after him. However, the PSO and Qamish were tied to older alliances with Saleh, Islamists and tribal leaders — agreements that would ensure Saleh remained in power, but there were no guarantees for his son. The PSO didn’t necessary play a part in empowering Ahmed.

With Saleh and US interests at odds, another security agency was created in 2002. Supported and funded by American cash and weapons, the National Security Bureau (NSB) came to fruition under the leadership of Saleh’s nephews and closest men. At times, the two agencies cooperated, but at most, they struggled for power and hid information from each other. Just as the FBI and CIA played separate games leading up to 9/11, a similar scenario happed in Yemen because the two agencies were simply competing rather than cooperating.

The establishment of the NSB didn’t completely take away responsibility for counterterrorism from the PSO. Al-Qaeda prisoners remained mostly in PSO prisons and Qamish, with knowledge of Yemeni society and tribes, was able to coordinate with tribal leaders for the capture or killing of AQAP militants. Most importantly, PSO prison held al-Qaeda officers in the middle of Sanaa. All known al-Qaeda militants and leaders sat behind its well-guarded prison walls until 2006.

In February 2006, 23 al-Qaeda members escaped from PSO headquarters. Interpol subsequently issued an international terror alert and enraged Saleh and the United States against Qamish. The 23 prisoners dug a tunnel for months to a nearby mosque using spoons and basic tools. Many concluded the story was simply too far-fetched to be true. Rather, it was believed that the militants received help from guards or others inside the prison.

The paranoia created by the escape was not exaggerated. After a short time, some of the escapees appeared in a video announcing the establishment of AQAP, the current branch of al-Qaeda which the United States considers the most active and largest threat to its national and global security.

To Yemenis, Qamish was still more fearsome than any other individual or organizations in Yemen. Rather, the long and horrifying past of the PSO is what most Yemenis feared for decades, especially that its members were in every governmental agency, making sure everyone was working for the interests of Saleh. The PSO is infamous for its long history of imprisonment, torture and the forcible disappearance of political opponents. Dozens of Yemeni families remain waiting for their family members who disappeared years ago — forcibly taken by the PSO. The lucky ones who were released or escaped have at best horrifying memories of the torture they were subjected to in its underground rooms.

In the six rounds of wars between the Yemeni government and the Houthis between 2004-10, PSO prisons were filled with those fought with, allied with, or even simply were suspected of having sympathies for Houthis.

Throughout 2011, all Yemenis — with the exception of Islamists who were once allies in the destruction of socialists — demanded the restructuring of the PSO and that it be combined with the NSB. The same demands were agreed upon in the National Dialogue Conference — the dialogue that took place after the revolution as a part of the Gulf Cooperation Council deal to bring about a new stable Yemen. All wanted to be rid of the way PSO was run.

Though Hadi’s decree doesn’t necessary respond to all the demands regarding the PSO, it was a highly welcome decision and considered as a first step in the right direction toward a better Yemeni security system.

It is hard to imagine a single area in Yemen that doesn’t have an issue with the PSO — the whole country was happy to see an end at least to its leadership. As Yemeni writer Sami Ghaleb aptly described the Yemeni experience with Qamish, “He is the Big Brother in ‘1984.’”

It remains unclear how much this will tangibly change the Yemeni security system, but the ouster of Yemen’s “Omar Suleiman” (the famous former head of Egyptian security) was definitely a defining moment in post-revolution Yemen, where some Yemeni hopes were finally achieved by the GCC deal, a testament that the Western- and especially US-backed deal, is capable of making some change.