Al-Monitor's Sophie Claudet sat down with Tawakul Karman, the 2011 Nobel Prize Peace winner who became the face of Yemen’s Arab Spring, at Brookings’ US-Islamic World Forum in Doha. The passionate yet remarkably humble 33-year-old journalist and activist spoke of her hopes for her country and the revolution. 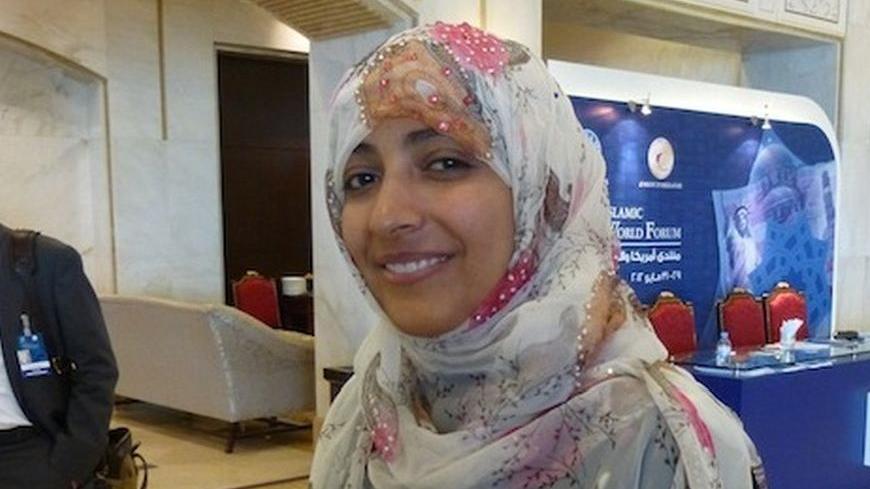 Tawakul Karman has a strong message to deliver to the international community and especially to the United States and Saudi Arabia, which co-sponsored the so-called Gulf Initiative to remove Ali Abdullah Saleh from power in 2011. She says they have a responsibility to force the former president and his supporters to stop fomenting a rebellion in Yemen. “They must freeze their money, they must enforce sanctions against them. Some of them really support al-Qaeda and other armed groups,” she claims. “They give them weapons, they give them money to make the transitional period unstable and impossible.”

The main challenge to Yemen’s democratic transition, she says, is current president Abed Rabbo Mansour Hadi’s difficulties in ridding the security forces and army of the old regime’s loyalists, including Saleh’s own family. “The army and security forces were supposed to be restructured and unified before [the] February 21 [2012 presidential election], according to the Gulf Initiative but until now it is not happening,” she laments.

When Hadi dismissed the former commander of the southern military region, Mahdi Maqwala, in early March 2012, Al-Qaeda conducted attacks in support of Maqwala who is known to back both Al-Qaeda and Ansar Al-Sharia, the next day, she points out. She sees Ali Abdullah’s direct hand in the resumption of militant attacks, saying the country had been spared in the period between the revolution and when Saleh was forced to step down in February 2012. Now, she claims the former president is using his connections within the army and security services to destabilize the country. She says Saleh’s son, Ali, who is still in charge of the Republican Guard, and the former president’s nephew, Brigadier-General Yahya Slaeh, who heads the Central Security Forces, must be sacked at once. But so far Ali Abdullah Saleh has refused to comply with President Hadi's executive orders to have his family members and supporters resign from their key military positions.

“These people should no longer have immunity, they should be on international terrorist lists and their cases should be taken to the International Criminal Court,” she insists. Only then will Yemen be able to “hold an open election, and draft a legitimate constitution.” Hadi, the former vice-president, was the sole candidate to run in the February 2012 presidential election following the negotiated departure of Saleh. “We will not leave Change Square [where the demonstrations that led to the revolution were held] until we achieve all our goals... The international community must exert more pressure if they want the Gulf Initiative to succeed,” she adds.

Turning more specifically to the United States, Karman says she does not support the escalating campaign of air strikes against Al-Qaeda militants. “We are against the drone attacks because they don’t really kill Al-Qaeda militants but mostly women and children.” She says there are other ways to eradicate terrorism in Yemen. “Not only our president [and] our army are fighting them, but also the people of Yemen.” She says several popular committees are organizing throughout the country to educate people about peace and against Al-Qaeda. “The goal of our revolution is to fight terrorists. This is our responsibility and we will succeed with Western help.”

Karman believes the United States never really grasped Yemeni politics. Saleh’s support of terrorist groups dates back from well before the January 2011 revolution and the United States failed to see that, she says. “Ali Abdullah Saleh gave Al-Qaeda land, money and weapons. He held meetings with them even inside his presidential palace!... I was uncomfortable about the coalition between the US and Ali Abdullah Saleh to fight Al-Qaeda. I met [with] the US administration several times before the revolution in 2005, 2009 and 2011, and I told them clearly that Ali Abdullah Saleh supports Al-Qaeda. You have to be careful with him and don’t trust him, I said."

"The CIA was not as clever as we thought,” she continues. “If Ali Saleh cheated you, now you have to understand why he cheated you and why you believed him all this time. Now Mansour Hadi will give you evidence that Ali Abdullah Saleh was a liar, he is serious about fighting Al-Qaeda,” she says in clear message addressed to past and current US administrations.

When asked if Barack Obama is doing a better job than his predecessor despite his decision to step up drone attacks, Karam gives a heartfelt yet qualified nod. “Of course, but he didn’t do as much as we expected from him. He did good in supporting our revolution and the Arab Spring.”

But Western nations have let down the Syrian people. “They are not fulfilling their humanitarian responsibilities. They have to act now to help and defend the Syrian people,” she says, her voice taking on a tone of urgency. She insists that buffer zones and safety routes must be set up at once to bring aid to civilians along with “real” sanctions against Bashar Al-Assad’s regime.

As comfortable as she is in her advocacy role, Karman has a hard time talking about herself and her remarkable journey to empower Yemeni women, starting with herself. She says she owes a lot to her father, a former government prime minister and judge who resigned in protest over corruption within Saleh’s regime. She says she was compelled when she became a journalist 12 years ago to write about corruption, human rights violations and even against the president, which was “very rare at the time, especially coming from a woman.” Later, she co-founded “Women Journalists Without Chains” which she says is one of her proudest achievements because “we defended press freedom, human rights, and women's rights.” That naturally led her to full-fledged political activism. In 2007, she and other activists started organizing weekly sit-ins outside Sanaa University in an area that soon became known as Change Square. After the Tunisian revolution “we changed our demands for freedom to a new slogan: ‘the people want the end of the regime’,” she recalls enthusiastically. “I have four children, three really,” she jokes. “The fourth is the revolution.” Karman is convinced Yemenis are ready for greater women participation in politics. “You can’t imagine how much people respect me. Even before the Nobel Prize and even the revolution. You are our new president, our sheikha, our queen, they tell me! They respect women who play a role. We had one before, the queen of Sheba.”

About her decision to join the Islamic political party Al-Islah know for its conservative positions on women’s rights, Karman gives a very pragmatic answer: “every party before the revolution was against women’s participation in political life, whether Islamic, Socialist or Nasserite... I felt compelled to struggle for women's rights besides being a journalist and I chose to join the largest and most important party,” she explains. “I don’t want people to perceive me as a member of this or that party, I was Tawakul with the revolution, our umbrella is the revolution not our parties. Now I am Tawakul the Nobel Prize winner from Yemen and I belong to everybody.”

Tawakul, the iconoclast, also decided to take off her full veil or niqab back in 2006. “It was at a conference. I gave a speech and people saw my face. It wasn’t a difficult decision for me, it was more difficult for the people that saw me,” she says bursting into laughter. “People knew me, I was active, I wrote, but they didn’t know me that way. Some were proud and some of them were angry,” she recalls. But she says she was and is still is convinced of her decision: “because I believe a woman must participate in political life and when she does, her message must be clear. I couldn’t achieve all my goals with a niqab. It was like putting a wall between me and others. Face is communication.” Still, she says it is up to women to choose to wear a full veil or not, which an overwhelming majority do in Yemen. “Women can still succeed with a niqab on, I did even when I was wearing it. It is up to women to do what they want. Veil or no veil. It’s a human right. It’s their choice.”

But Karman does not want to be confined to the role of a women's rights activist. “Women must fight for human rights, all human rights, not just theirs,” She says. “Now Yemenis for the first time are trying to become full citizens, both men and women” which she says is “an important legacy of the revolution.” When asked if she is thinking of creating her own party, one that would fully reflect her beliefs, she says she and other activists are thinking about it. “But I encourage young people to do it, it shouldn’t be just me, Tawakul,” she says. “We need new forces in Yemen, either by creating a new party or encouraging young people to join existing parties. This is very important in the transitional period.”

Sophie Claudet is a print and television journalist specialized in Middle East affairs. She is currently based is Paris where she serves as Al-Monitor Europe and Middle East correspondent as well as video editor-in-chief.