US drone attacks on Yemeni villages have tarnished America’s image. 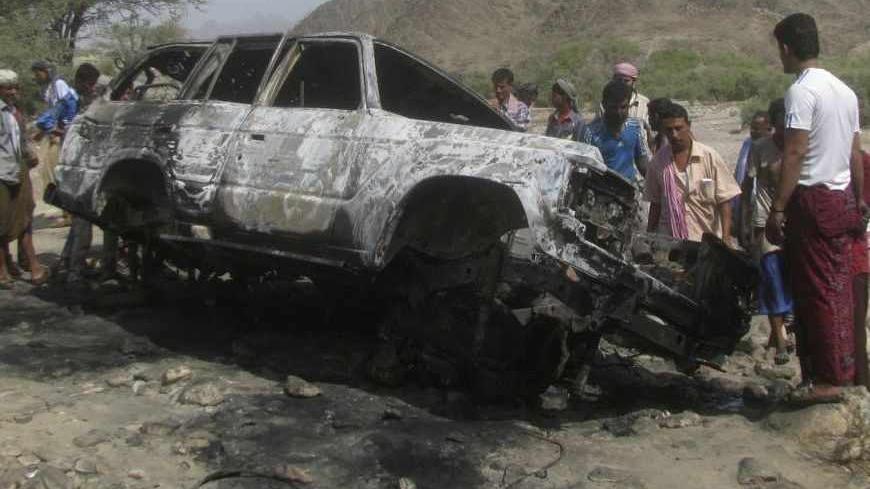 People gather at the site of a drone strike on the road between Yafe and Radfan districts of the southern Yemeni province of Lahj, Aug. 11, 2013. - REUTERS/Stringer

SANAA, Yemen — Just a day before Yemen's most significant annual holiday marking the end of a month of fasting, American and British diplomats evacuated the country because of what both governments described as major security threats from al-Qaeda. Since then, the few foreigners remaining in the country have been on lock-down within their homes.

Meanwhile, the capital's streets bustled with Yemeni families shopping for the holiday. Locals remained unaware of the heightened security measures until the noisy sounds of American planes hovering over the capital awakened terrified residents Tuesday morning.

Twitter, Facebook and other media outlets exploded with comments from enraged residents of Sanaa, voicing their frustration with the American and Yemeni governments for allowing US planes to occupy the capital's sky for three days. Yemenis also expressed bewilderment as to the reasons behind the scare, given that the security situation on the ground has remained stable. The capital security measures are even lower than in some days in the past. It remains too obvious that Yemenis don’t understand this sudden evacuation that presented Yemen as the source of evil and threats; especially that they weren’t bothered with anything recently more than with the drones above their heads.

Even more enraged than urban dwellers were villagers living in towns hit by American drones over the past few days. During the most sacred and festive time of year, the US conducted eight different strikes over a week; the highest rate since US started using drones in Yemen. For the last few days, it has been difficult to follow the drone casualty numbers and to differentiate between strikes.

With the public frenzy over the planes hovering over Sanaa and the rapid-fire drone strikes in the countryside, any remaining credibility of the US government's stated intentions to take a comprehensive approach to Yemen's economic and political development has now evaporated. Even Yemen's political elites, who have historically been close allies with the US government, have been pointing fingers at the Americans over the past few days. They all see the US as supporting the transition in one hand and killing it by the other.

President Abed Rabbo Mansour Hadi paid the biggest price of all, as three drone strikes transpired during his trip to the US. One strike hit during Hadi's meeting with the CIA director, and reports of another surfaced just hours before his meeting with President Barack Obama. The Yemeni public interpreted the timing of the strikes as a sign of weakness for Hadi, with opponents accusing him of becoming an American yes man.

Indeed, it is hard to ignore the fact that most of the president’s speeches praise international support, and in return Western powers have often lauded Hadi for his careful leadership of Yemen’s transition. The events of the past few days have largely invalidated Hadi’s approach in the eyes of the public. He is now left along to face a variety of enraged stakeholders, each of which will make every effort to manipulate his weakened position for their own interests and influence. As he is a member of a politically insignificant tribe, such manuevers could seriously endanger Hadi’s hold on power.

While Yemenis have suffered greatly, even perhaps more than Americans, from the Yemen-based branch of al-Qaeda’s presence in the country, the US military’s hyper-focus on the terrorist group is hugely disproportionate with its actual capabilities. As in the past, America’s over-reaction to a potential security threat has only helped al-Qaeda prop up the myth of its widespread influence.

Frustration with the US government has grown over the past decade. Large swaths of the public, particularly the youth, continue to resent America’s close alliance with the dictatorship of Ali Abdullah Saleh, a relationship that persisted even as the longstanding leader brutally responded to the revolution of 2011.

Other groups such as the Houthis oppose American policy for their own region-specific reasons, and the events of the past few days have only strengthened their credibility. Even Yemeni Islamists, the opponents of Houthis and a faction that usually enjoys good relations with America, were already angered over the American opposition to the Muslim Brotherhood in Egypt as Morsi was ousted.

The majority of Yemenis are simply angry because the US seems to have little concern for the real challenges facing the country. Millions of Yemenis live in extreme poverty. The needs for investments in healthcare, education and infrastructure are immense. Meanwhile, the US spends enormous resources on drone strikes that do little more than terrify impoverished villagers and provide undue publicity to al-Qaeda.

It is no longer appropriate to worry about America’s image in Yemen. America’s image as a promoter of peace, democracy and progress in Yemen can no longer be resurrected. The families and friends of women and children killed in drone strikes will not tolerate any such masquerading. From a public relations standpoint, the focus of US policy makers should now be to ensure that the US does not become the No. 1 obstacle in the way of Yemenis’ dreams, hopes and aspirations.