Despite Arab, US attacks, AQAP still holding out in Yemen

Al-Qaeda in the Arabian Peninsula recently withdrew from its prosperous base in Mukalla, but with 20 years of investment in the country, the group is unlikely to be defeated while other battles continue to mire the country in chaos and violence. 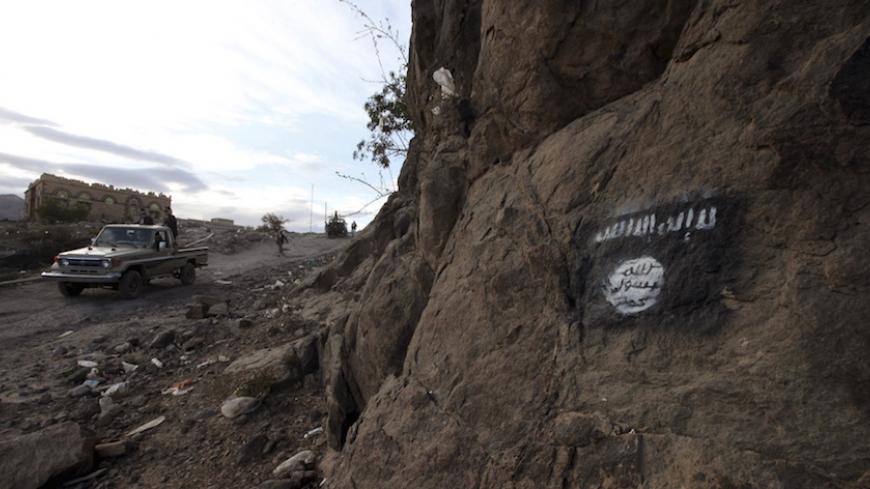 Shiite Houthi rebels drive a patrol truck past an Ansar al-Sharia flag painted on the side of a hill along a road in Almnash, the main stronghold of Ansar al-Sharia, the local wing of al-Qaeda in the Arabian Peninsula in Rada, Yemen, Nov. 22, 2014. - REUTERS/Mohamed al-Sayaghi

SANAA, Yemen — The Yemen-based group al-Qaeda in the Arabian Peninsula (AQAP), considered by many to be the most dangerous splinter of al-Qaeda, has never been as powerful in its 20-year history as it has been in the past 12 months. Despite recent setbacks, it maintains control over much of Yemen.

The group had taken over swaths of land in southern Yemen and seized enormous financial resources before being hit April 22 by military operations carried out by the Arab coalition and led by UAE forces with the support of Yemeni soldiers loyal to President Abed Rabbo Mansour Hadi.

Had it not been for the support of the Arab coalition, the Yemenis would have failed in fighting AQAP following its control over Hadramawt province, which covers some 193,000 square kilometers (almost 75,000 square miles), 36% of the total area of Yemen. AQAP also controls Zinjibar, the capital of Abyan governorate, where Hadi is from.

Since the beginning of April 2015, AQAP has taken advantage of the war raging between armed Houthis — who have controlled the capital, Sanaa, since September 2014 — and Hadi’s forces backed by Saudi Arabia. AQAP was able to take over three provinces in southern Yemen — al-Mukalla, Abyan and Shabwah — where they started establishing their own state and recruiting new followers.

AQAP chose the oil city of Mukalla — the capital of Hadramawt province in southern Yemen — to center its wealthy mini-state after controlling around 600 kilometers (373 miles) of coastline on the Arabian Sea. In a lengthy investigative report published April 8, Reuters indicated that AQAP was earning as much as $2 million every day in taxes on goods and fuel coming into the port.

Yet in an operation that began April 22, the Arab coalition appeared to oust AQAP fighters in just 48 hours from their prosperous state, which fell under the control of Hadi’s forces. However, many reports said AQAP had withdrawn from the city before the attack even began.

Abdul Salam Mohammad, the head of the Abaad Studies and Research Center in Sanaa, told Al-Monitor, “The US drones helped gather information on the status of AQAP in Mukalla, which was reflected in the efficiency of the battle's management.”

Mohammad warned that piecemeal operations will not bear fruit unless the Yemeni government implements an integrated program to recover the entire country. “After its defeat in Mukalla, AQAP will probably return to its old strategy by deploying scattered armed groups that conduct sudden operations against their targets,” he said.

Following the April 22 military operation, the Saudi Press Agency reported that the Arab coalition killed 800 al-Qaeda fighters, but this figure seems greatly exaggerated compared with the numbers Al-Monitor obtained from an official medical source at Mukalla. That source shared on condition of anonymity that as of April 28, the death toll in government hospitals stood at 26 people, including five civilians, 14 government soldiers and only seven AQAP fighters. The source added that 11 AQAP fighters were injured, compared with 19 civilians and 29 soldiers.

Mukalla resident Abdullah Dahdouh told Al-Monitor, “AQAP avoided a full and unrestrained confrontation with the coalition troops since mediation efforts by tribal leaders persuaded AQAP leaders to leave the city to prevent its destruction, and indeed they pulled out to the southern Shabwa province.”

But AQAP also imposed severe legal sanctions: It cut off the hands of thieves, imprisoned transgressors, killed and even crucified people charged with various crimes.

AQAP’s growing power and dominance concerns the United States, which believes AQAP is capable of mounting attacks that would threaten US interests. Although ousted from Mukalla, AQAP remains present in the towns of Jaar and Zinjibar in Abyan province. In early April, the Saudi-led coalition had waged a war against AQAP in Zinjibar under the cover of fighter aircraft, but was unable to push it completely out.

At the beginning of 2016, Washington intensified its drone attacks against AQAP positions. On April 26, an airstrike killed AQAP's chief financial officer, Hossam al-Zanjibari, in Abyan and three of his companions by targeting his car in Zanjibar.

On March 19, US drones targeted an AQAP training camp, killing 50 members and injuring 30 others. On March 27, the drones bombed buildings used by AQAP in Abyan province and destroyed the intelligence headquarters in Zanjibar, killing 14 AQAP fighters.

AQAP suffered setbacks after the killing of Jalal Belaidy, one of its most prominent young leaders, and two of his friends in a US airstrike that targeted their vehicle Feb. 4 in Abyan. The United States had announced a $5 million bounty on Belaidy, who was running AQAP's combat operations. Belaidy, once a goalkeeper in a local football club, was seen as a senior leader among AQAP youth. He had even appeared in a horrific video taking part in the slaughter of 14 soldiers in Mukalla on Aug. 9, 2014.

These were not the only US raids to target AQAP since the beginning of this year, but they were the most important. The US strikes are based on intelligence cooperation agreements that oblige local informants and regional and Yemeni intelligence services to fight with the Americans against terrorism. This cooperation has allowed US drones to target and eliminate the group’s leaders one by one since 2002 and led to the killing of dozens of prominent field leaders and fighters.

While the Arab coalition’s operations are focused on destroying the sites of Houthi and Hadi forces, the US strikes have been directly targeting al-Qaeda, armed with years of experience and expertise in battling the group in Yemen, not to mention high-tech and cutting-edge technology.

Yet sources say the battle against AQAP will not end soon. The organization that emerged in Yemen 20 years ago remains powerful and rich in money, weapons and recruits.