Yemeni forces have taken charge in the latest offensive against al-Qaeda in the Arabian Peninsula, winning the support of the public. 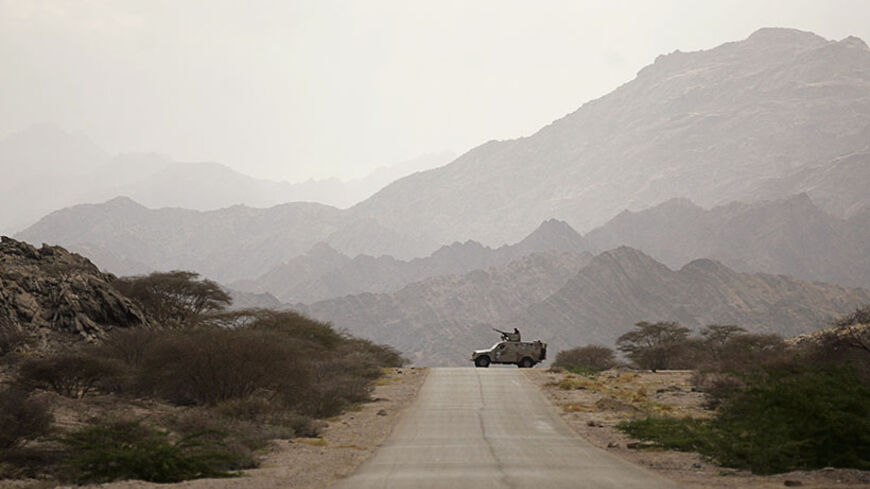 An army vehicle patrols in al-Mahfad, in the southern Yemeni province of Abyan, May 23, 2014. - REUTERS/Khaled Abdullah

The Yemeni army has been in an open war with al-Qaeda in the Arabian Peninsula (AQAP) since late April. The latter had launched direct attacks in April in the provinces of Abyan and Shabwa, in the south of the country. The army started its battle at the beginning of last month under the slogan, “Together for a Yemen free of terrorism,” in what could be considered the largest and most comprehensive attack led by the Yemeni army against al-Qaeda. The jihadists had taken advantage of the weakening of the state since 2011 to control several areas and remote towns.

The defense minister and head of national security personally oversaw the battle, in what could be considered as a new, rare and serious step by the Yemeni government to confront al-Qaeda. With the start of the battle, Yemeni President Abed Rabbo Mansour Hadi gave a televised speech announcing that more than 70% of AQAP members were non-Yemenis. It was an attempt to “Yemenize” the war and mobilize domestic opinion to support the war. He largely succeeded in that, especially given the semi-hidden role — at least in the beginning — of US drones throughout the battles. Yemeni public opinion responded, standing by the army as it came to be perceived as a Yemeni war, not a war fought on behalf of foreign powers, more precisely the United States.

The latest round of clashes started after Yemeni army officials paid a visit to Washington at the beginning of April. But the Yemeni public still saw the war as legitimate. Over past months, AQAP has conducted several operations targeting Yemeni civilians, such as the al-Aridi hospital attack in which more than 50 civilians were killed. The attacks fueled popular anger against al-Qaeda, and prepared the public mood for a potential Yemeni military operation against al-Qaeda.

In an interview with Al-Monitor, a senior military official said that the latest fighting was the result of Yemen wanting to take the lead against al-Qaeda. The official, speaking on condition of anonymity, said that Yemen officially asked Washington to review its drone strikes policy. The same source said that Yemeni army officials have become increasingly aware of the danger posed by al-Qaeda, which has assassinated dozens of army officers and carried out dozens of attacks in Yemen over the past months. According to the same source, the army found many documents in Abyan and Shabwa that revealed al-Qaeda’s war plans and financial details.

The recent confrontations have sparked an open war between the army and al-Qaeda. The army is carrying out special battles and operations, including raids to arrest members of al-Qaeda cells in the capital, Sanaa. The security agencies of the country have been put on a state of alert.

In late May, amid intensifying clashes in Abyan and Shabwa, cars filled with dozens of armed al-Qaeda men attacked Seiyun in east Yemen and tried, for hours, to break into private and state banks.

The attack’s aftermath is not yet clear due to conflicting information by both parties and because the Yemeni government tightened the screws on journalists from gaining access to the area. The al-Qaeda attacks against these banks came months after UN Security Council Resolution 2140 was issued, and which banned individuals, groups or states from paying ransom money to terrorist organizations, as ransom money had become an important financial resource for al-Qaeda over the past two years. The organization has reaped tens of millions of dollars through this method.

The current round of war covers about 10,000 square kilometers (3,861 square miles), an area almost the size of Qatar. This area is divided into two military areas — the fourth and the third — in the most important Yemeni provinces where al-Qaeda is present: Abyan and Shabwa. Al-Qaeda performed its first official jihadist activity, led by Abu al-Hasan al-Mihdar, in 1998 from the strategic mountains of Hatat, in Abyan.

Ironically, AQAP leader Nasser al-Wahishi and the current Yemeni defense minister and president both hail from Abyan province, where their men are in fierce clashes. Also, the head of Yemen’s National Security Agency, who is participating the management of the battle on the ground, hails from the province of Shabwa and was its governor.

Yemeni-American Anwar al-Awlaki, who was killed by a US drone in 2011, also comes from Shabwa. The neighboring province of Hadramawt is the land of Osama bin Laden’s ancestors.

Surprisingly enough, the war between the Yemeni army and al-Qaeda was accompanied by a fierce media war between them. The army has employed all media channels to counter al-Qaeda and to create popular support, while al-Qaeda has used social media to broadcast its news hour by hour and to disseminate live images directly from unknown locations. This is the first time that both parties have given priority to the media to present their views to the public.

Of course, the war between al-Qaeda and the army in Yemen is not new and is unlikely to be decided only militarily. Al-Qaeda, which the United States considers a vital threat to its national security, grew in parallel with the increasing US drone strikes in the past years. Although the Yemeni army announced the liberation of Abyan from al-Qaeda in June 2012, this was not accurate as the latter only changed its military style from directly controlling cities to hiding in the mountains while conducting quality operations.

In addition, making use of people's brigades, such as the Abyan people's committees in the past, have not proven successful. The committees have not been able to control the cities or defeat al-Qaeda. Also, they constitute new armed groups that are not subject to the authority of the state and whose future is unknown.

But the latest clashes are characterized by a new aspect, which is the growing desire by Yemeni authorities to face al-Qaeda amid the unprecedented popular support for the Yemeni army. This support was rare in the past for many reasons, most notably the direct role of the United States in the war on terrorism, most of whose victims have been civilians. That the United States has taken a backseat and allowed Yemeni forces to take the lead in its fight has, in the eyes of many Yemenis, restored a bit of dignity and sovereignty to the war-torn nation.