Is the time ripe for ultimate eclipse of al-Qaeda in Yemen? 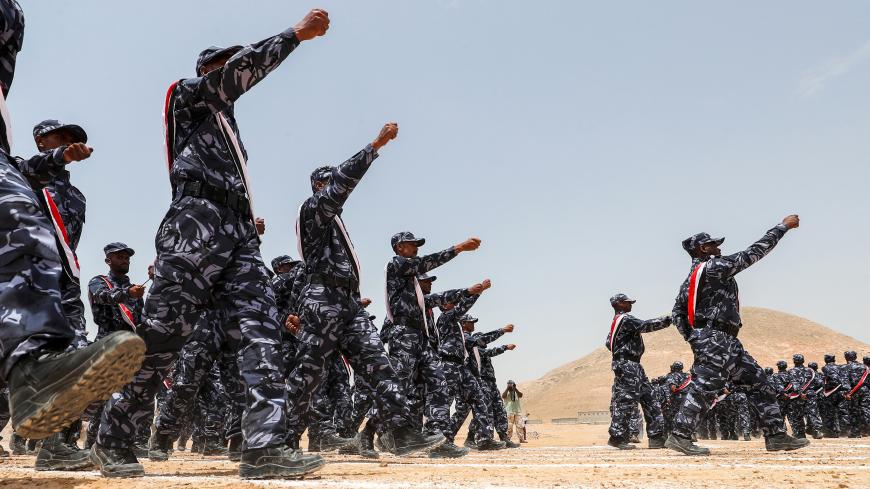 UAE-trained cadets of the Yemeni police, supporting forces loyal to the Saudi and UAE-backed government, marching during their graduation, in the first such ceremony after the city was retaken from al-Qaeda jihadis, Mukalla, Yemen, Aug. 8, 2018. - KARIM SAHIB/AFP via Getty Images

It has been two weeks since the United States announced the killing of the chief of al-Qaeda in the Arabian Peninsula (AQAP). This severe blow has hit al-Qaeda hard, adding to the list of its losses over the last 10 years. The most recent loss is the death of Qassim al-Rimi, who was targeted in Wadi Abedah in Yemen's Marib province.

On Feb. 6, the White House confirmed the death of Rimi in an airstrike, saying that this man’s death “degrades al-Qaeda” and “brings us close to eliminating the threats these groups pose.” Apparently, it is a big victory but it is not a cure-all for potential al-Qaeda threats. Multiple American drone strikes have been conducted to kill al-Qaeda leaders, but this has not sufficed to wipe out the entire existence of al-Qaeda in Yemen. The killing strategy has been effective in uprooting the heads, but the roots of the problem persist.

Rimi was a founding member of AQAP and his influence grew in 2015 when he was declared as the new head of the group after the killing of his predecessor. Since then, Rimi has been the mastermind of al-Qaeda operations in war-ravaged Yemen. Al-Qaeda’s malign activities have just added to the ordeal Yemen has been witnessing over the last five years.

The United States has conducted several counterterrorism operations in Yemen even prior to the breakout of the civil war in 2015. The first high-profile al-Qaeda leader to be killed on Yemen’s soil was US-born Anwar al-Awlaki, who is originally from Yemen’s Shabwa province. He became a prominent cleric and a spokesman for AQAP. A US drone strike targeted him in September 2011.

In 2013, the Yemeni government announced that Said Ali al-Shihri, a Saudi-born national, died from wounds he previously sustained in a US counterterrorism operation in Yemen. Shihri had a long terrorism career. He was wounded in an airstrike in Afghanistan in 2001 and was brought to the American prison at Guantanamo Bay. After a five-year incarceration, the United States released him into a Saudi program that was established to persuade jihadis to renounce violence and be part of society. But he fled to Yemen and AQAP announced on the internet in early 2009 that Shihri was the group’s new deputy commander.

In June of 2015, AQAP announced that its leader, Nasir al-Wuhayshi, was killed in a US drone strike in Yemen’s Hadramout province. He had a weighty influence in the group and he was a former personal assistant to Osama bin Laden. Upon declaring the news of his death, al-Qaeda was swift to reveal his successor, Rimi, who has lately met the same destiny: being killed by a US drone attack in Yemen.

In February 2016, a drone strike hit a car, killing six al-Qaeda members including the head of Ansar al-Sharia, an offshoot of al-Qaeda, in Yemen’s Abyan province. Moreover, US President Donald Trump declared in October 2019 the death of Ibrahim al-Asiri in a drone strike in Yemen two years prior in a counterterrorism operation. Asiri, originally from Saudi Arabia, was a highly skilled bomb maker.

The successive losses of al-Qaeda have weakened the group and nowadays it appears in its weakest stage, according to observers. Nabil al-Bokairi, a Yemeni researcher and writer, told Al-Monitor, “Al-Qaeda in Yemen has been living its dying moment for a long time given the fact that many leading figures have been eliminated. Rimi’s death will contribute to weakening al-Qaeda further. It is the eclipse of al-Qaeda.”

Bokairi added, “The media have exaggerated the present size of al-Qaeda in Yemen and have depicted Yemen as the safe haven of al-Qaeda. However, time has proven that al-Qaeda is much weaker. We still remember how al-Qaeda handed over Mukalla [city] to the so-called Arab coalition forces in Yemen in 2016.” In April 2016, al-Qaeda operatives withdrew from Mukalla in Hadramout province after mediation efforts led by religious clerics.

While the drone strikes have caused tremendous losses to al-Qaeda, this killing approach is not a viable approach to get rid of the group for good, according to observers.

“The drone strikes will not eliminate al-Qaeda. Recently, US drone strikes have killed some leaders of al-Qaeda. This is not enough. The United States and the international community should find other ways to confront al-Qaeda,” Adel Dashela, a Yemeni researcher and writer, told Al-Monitor.

He noted, “The international community has to support the Yemeni people through resolving the internal conflict, helping to implement a democratic transition and the outcomes of the National Dialogue Conference [NDC], ending the [Houthi] military coup and stopping the regional proxy conflict in Yemen. Then they can eliminate al-Qaeda in Yemen.”

The political parties engaged in a national dialogue in March 2013 and concluded in January 2014. It was called the NDC in which a plethora of political parties, civil society organizations and the youth took part. Though they agreed on a road map to a better Yemen, dreams shattered when the Houthis took over Sanaa in September 2014, setting a precedent for a new political and military scene that ended up in a devastating civil war.

According to Dashela, the current conflict in Yemen has led to the rise of al-Qaeda in some areas of Yemen’s south and east and this has enabled it to exploit the ongoing conflict and spread its radical ideology among the tribesmen and in tribal areas. “In addition, Yemen's internationally recognized government is weak, and it can’t fight the [Houthi] sectarian militias, the [separatist] militias and al-Qaeda.”

Dashela argued that all partners fighting terrorism have to address the core of the problem. “They must find jobs for the youth, solve unemployment problems and poverty, and implement a real national reconciliation [in Yemen].”

The irreparable eclipse of al-Qaeda requires a fix of Yemen’s problems, in particular political, military and economic issues. In the absence of strong governance, outlaws, including al-Qaeda, will find a fertile ground to rise and survive and drone strikes alone will not make Yemen a radicalism-free country.