So far, the Islamic State and al-Qaeda have not faced off militarily in Yemen, but that possibility is growing as IS escalates its violence, pushing for greater control. 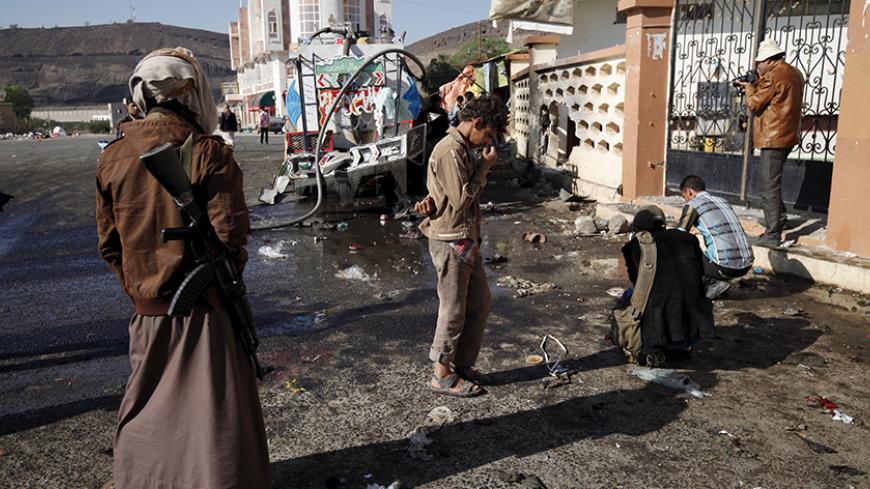 A Houthi militant stands outside al-Nour mosque in Yemen's capital, Sanaa, Oct. 7, 2015. Seven people were killed in a suicide bombing on the mosque; the Islamic State claimed responsibility for the attack. - REUTERS/Mohamed al-Sayaghi

ADEN, Yemen — Yemen’s civil war is allowing the Islamic State (IS) to expand its presence there. Amid the spread of extremism engendered by the conflict between the Houthis and the central government, IS is becoming the main adversary for both the Houthis and al-Qaeda in the Arabian Peninsula (AQAP).

IS is strengthening its footprint in the northern, Houthi-controlled governorates and is making progress in the south, although al-Qaeda remains the dominant force there.

Attacks by armed pro-IS groups rose in October, after they pledged allegiance to IS leader Abu Bakr al-Baghdadi in the capital, Sanaa, and other cities in the country’s south and southeast. As a result, their activities gained an added dimension, as they attempted to impose themselves as effective instigators of violence on the Yemeni scene. These groups attacked government troops as well as those they describe as Shiite, Iran-backed Houthis.

IS executed its largest two operations in Yemen in October: when it claimed responsibility for a car bomb attack against the residence of the president and members of the Yemeni Cabinet at the al-Qasr Hotel in Aden, and when it targeted a camp for Emirati troops, part of the Saudi-led Arab coalition.

IS launched its efforts in Yemen back in March, when the organization bombed two Shiite Houthi mosques in Sanaa, leading to the death of Houthi command figures and religious leaders, most notably Imam al-Murtada bin Zaid al-Mahtouri and Mohammad Abdelmalek al-Shami.

In April, IS beheaded four Yemeni soldiers and executed 11 others by firing squad in the southern governorate of Shabwah. By releasing a video of the carnage, IS clearly demonstrated the strategy of savagery espoused in its strongholds and the adoption of the same methodology and media strategy by its branches in Yemen.

The organization’s operations reached their peak in June, when IS conducted seven operations against what it described as “Shiite Houthi places of worship” in Sanaa. Those attacks killed and wounded about 100 people, mostly Houthi supporters.

On June 17, the IS branch in Yemen also claimed responsibility for four attacks in Sanaa targeting Houthi religious sites and buildings. The attacks killed 31 and wounded a number of others. On June 20, a booby-trapped car exploded next to the Houthi Qubbat al-Mahdi mosque in Old Sanaa, killing and wounding a number of people.

About the same time, IS took responsibility for a car bomb in a Houthi-controlled security quadrant in Sanaa, which killed and wounded a number of Houthis. On June 29, an attack by IS on the houses of two Houthi leaders in Sanaa left at least 28 dead or wounded, including eight women.

In Aden, IS executed a number of Houthi snipers July 18.

The growing level of violence is strengthening IS and putting it on a direct collision course to replace AQAP as flag bearer for the Holy War against their enemies. Both groups seek to take advantage of political and sectarian instability. As a result, the influence — even the mere existence — of the Ayman al-Zawahri-led al-Qaeda is threatened.

IS’ combat tactics rely on taking control of a specific geographic region, as was the case in Iraq and Syria, as a prelude to launching attacks against other areas — a feat it has failed to accomplish so far in Yemen. Yet, it succeeded in establishing training camps for its combatants in mountainous regions of southern Yemen. IS revealed that feat in a November statement detailing how its troops, trained in the southern city of Lahej, attacked a government military camp in Hadramaut.

In parallel, disputes erupted between the two organizations following the assassination of a number of high-ranking AQAP leaders in drone attacks. Most prominent among those killed was the organization’s emir in the Arabian Peninsula, Abu Basir Nasser al-Wuhayshi, killed June 12. His death led to both groups trading Twitter-based accusations of treason and misrepresentation of the jihadi cause. These disputes threaten to grow into direct clashes, as occurred in Syria.

However, to date, no direct, physical clashes have been reported between al-Qaeda and IS in Yemen. The dispute has remained confined to verbal barbs and the avoidance of armed confrontations. Yet, that could change dramatically due to the increased level of political and military competition between the two, particularly as both share animosity toward the Houthis and Shiites in general.

Furthermore, there are indications that a number of AQAP members have defected to IS. Al-Qaeda’s late leadership figure in Yemen, Maamoun Hatem, was reputed to be one of the most eager to pledge allegiance to Baghdadi. When Hatem was killed May 11 in an American drone attack, some IS members tweeted eulogies — a phenomenon that was repeated in July when al-Qaeda singer/chanter Abu Hajar al-Hadrami was killed in a drone attack in Mukalla in July.

The number of IS combatants is kept secret, as are their locations or hideouts — particularly in light of them successfully infiltrating the security measures of coalition and government forces in Aden, as well as the strict security measures adopted by the Houthis in Sanaa.

These successes are the result of IS enjoying some popular support in predominantly Sunni areas (such as Shabwah, Al-Bayda, Lahej and Taiz), and especially in areas that have suffered the atrocities of the Houthis and their allies, who perpetrated human rights violations against unarmed civilians. The IS-affiliated factions thus are welcomed as protectors from such transgressions.

This all could lead to disaster for Yemen.

In the midst of the rapid changes taking place in Yemen, the emergence of IS’ branch there has caused widespread controversy. Yet, accusations that supporters of former President Ali Abdullah Saleh’s regime are backing the IS expansion, seeking to shuffle the cards on the Yemeni scene, seem to be nothing more than unfounded political mudslinging.

Nabeel al-Bakeiri, a Yemeni researcher of Islamic factions, told Al-Monitor that the expansion of IS is more media propaganda than fact. He said there are numerous examples, particularly that “none of al-Qaeda’s prominent leaders had pledged allegiance to Baghdadi.”

The chances of armed clashes between al-Qaeda and IS in Yemen remain slim indeed for now, as the latter is still in a mobilization and preparation phase and thus unable to confront al-Qaeda militarily. But a repeat of the Syrian scenario remains possible in light of the battle for influence that rages between them, while taking into account that their shared hostility for the Houthis may delay any such clashes.