The Yemen war has profound implications for the stability of the Arabian Peninsula, Saudi Arabia and the broader region as al-Qaeda recruits and trains in the chaos. 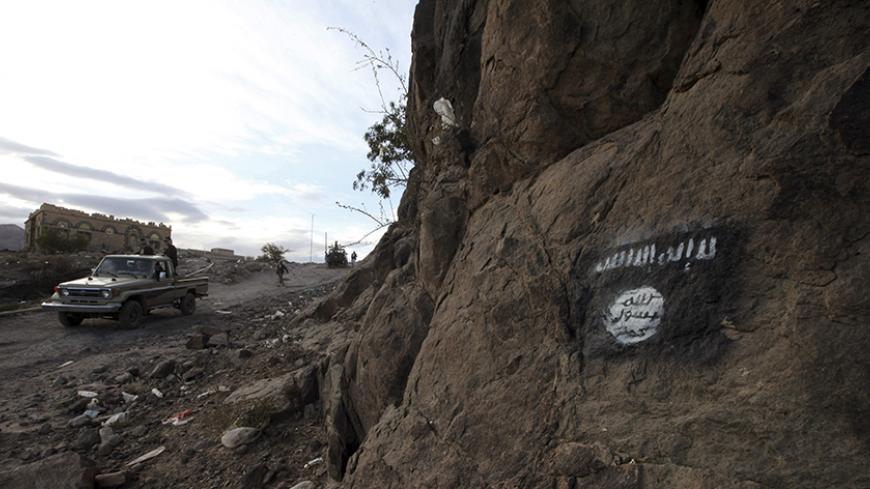 Shiite Houthi rebels drive a patrol truck past an Ansar al-Sharia flag painted on the side of a hill along a road in Almnash, the main stronghold of Ansar al-Sharia, in Rada, Nov. 22, 2014. - REUTERS/Mohamed al-Sayaghi

Al-Qaeda in the Arabian Peninsula (AQAP) is the early winner in Yemen. With its hated enemies Saudi Arabia and the Zaydi Houthi rebels engaged in what may well be a protracted war, AQAP is flourishing in eastern Yemen and under less pressure than at any time since its founding in 2009.

On April 2, AQAP militants attacked the prison in Mukalla, the capital of Hadramawt province, releasing as many as 300 prisoners. Many were experienced al-Qaeda operatives. The attackers also destroyed government installations and weakened the already fragile security situation in Hadramawt.

Hadramawt is the ancestral home of Osama bin Laden's father. The eastern wing of Yemen, primarily Sunni, has long been a fertile recruiting area for al-Qaeda. It has never been under firm government control from Sanaa and has always had weak security.

The Saudi-led Operation Decisive Storm has achieved complete air superiority and air control over the country. Saudi and Egyptian naval forces are blockading Yemen's main ports. The Houthis and their allies loyal to former President Ali Abdullah Saleh are largely cut off from outside supplies from their ally Iran. The impoverished country faces a humanitarian disaster.

The Houthi-Saleh forces have taken control of much of Aden, the last major city loyal to former President Abed Rabbo Mansour Hadi, who is in exile in Saudi Arabia. But the Zaydis are also overextended, controlling not only predominantly Zaydi areas in the north but also Sunni areas in the south and along the Red Sea coast and cities like Hudaydah, where they are unpopular. The Saudis are trying to rally Sunni tribal opposition to the Zaydis to engage them in a war of attrition, and Saudi money will attract takers.

Riyadh wisely wants to avoid getting sucked into a quagmire itself by sending Saudi ground forces into Yemen in large numbers, risking provoking a nationalist backlash. So a stalemate looms for the immediate future. The Royal Saudi Air Force and its allies with US help operate with impunity, but the Zaydis remain in control of the north and the major urban centers. Hadi is weak and marginalized.

All this leaves al-Qaeda increasingly free to recruit and train in the chaos. AQAP is still being monitored by Saudi intelligence, especially Prince Mohammed bin Nayef and the Interior Ministry. Western intelligence services have residual capabilities but are handicapped by the closure of embassies and military posts. Drone strikes are down. Al-Qaeda has more freedom of operation, which means it is more dangerous.

AQAP already demonstrated its reach this year with what it calls "the blessed battle of Paris," the attack on the office of the French satirical magazine Charlie Hebdo last winter. The group trained the killers and claimed credit for financing the operation. It credited al-Qaeda emir Ayman al-Zawahri for selecting the target. The Paris attack inspired others a month later in Copenhagen against other individuals who had satirized the Prophet Muhammad.

AQAP was behind the December 2009 attempt to blow up a passenger jet flying from Amsterdam to Detroit and a series of plots to send explosives to destroy aircraft in the United States. The group has a cadre of experienced bomb-makers.

The longer the war in Yemen continues, which could be a long time, the more al-Qaeda will benefit. It will carry out terror attacks on the Zaydis and the Saudis both. It has underground cadres in the kingdom that Interior Minister Mohammed bin Nayef tries to unmask. He has been very successful in doing so, but it's a constant battle.

It will also seek to strike targets in Europe and North America. AQAP's leader Nasir al-Wuhayshi is a bin Laden disciple and a firm believer in taking jihad to faraway enemies.

Another target for al-Qaeda may be Oman, which has a long border with eastern Yemen. The Omanis face the prospect of a chaotic, lawless terror emirate on their Dhofari border for the foreseeable future. With the sultan's health in doubt and an uncertain succession process, Muscat must keep its guard up. Sultan Qaboos bin Said, whose country shares a long maritime border with Iran, has an aversion to foreign adventures and chooses not to join Operation Decisive Storm.

The Yemen war has profound implications for the stability of the Arabian Peninsula, Saudi Arabia and the broader region. It is King Salman bin Abdul-Aziz Al Saud's first test as custodian of the Two Holy Mosques and Qaboos' last after 45 years on the throne. It is simultaneously a sectarian conflict, the unfinished business of the Arab Spring and part of the broader Saudi-Iranian struggle for regional hegemony. It is likely to draw in more players as it goes on and spill out of Yemen to other countries. For now, al-Qaeda is the only clear winner.