Al-Qaeda's Paris attack not the first to target cartoonists

Al-Qaeda's attack on Charlie Hebdo in Paris is not the group's first targeting of European cartoonists, as the group had planned to attack the offices of a Danish newspaper in 2009. 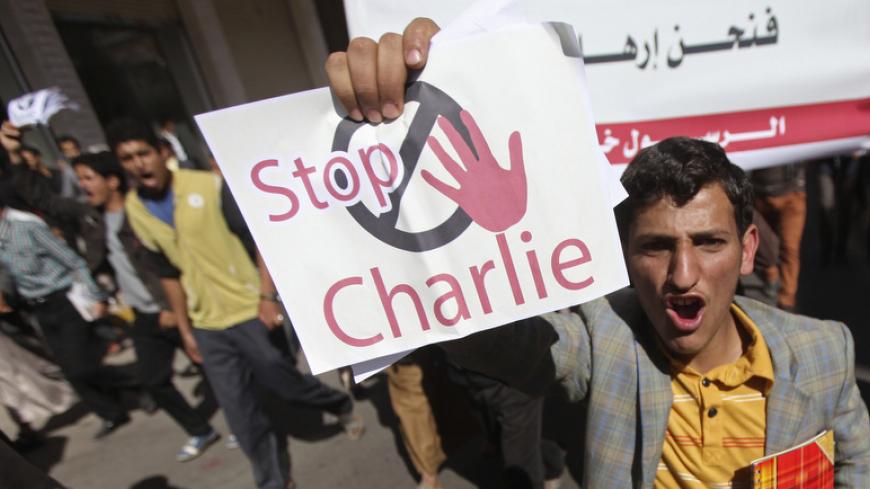 A protester shouts slogans during a demonstration against satirical French weekly Charlie Hebdo, which featured a cartoon of the Prophet Muhammad as the cover of its first edition since an attack by Islamist gunmen, in front of the French Embassy in Sanaa, Jan. 17, 2015. - REUTERS/Mohamed al-Sayaghi

The terrorist attack in Paris targeting the satirical magazine Charlie Hebdo for publishing cartoons of the Prophet Muhammad was not the first al-Qaeda plot to attack cartoonists in Europe. A plot foiled in 2009 to attack the Danish newspaper Jyllands-Posten was eerily similar to the Paris operation and was connected directly to the senior al-Qaeda leadership.

Al-Qaeda in the Arabian Peninsula (AQAP) claimed credit for the Paris attack in a series of messages, tweets and a video released Jan. 13. The 11-minute video featured AQAP ideologue Nasser bin Ali al-Ansi, who unequivocally said AQAP "chose the target, laid the plan and financed the operation." This is consistent with media reports that at least one of the two French-Algerian brothers who carried out the attack trained with AQAP in Yemen.

The most interesting part of the video is the prominence it gives to al-Qaeda's emir, Ayman al-Zawahri, whose orders it says led to the "implementation" of the "blessed Battle of Paris." The video also ridiculed the foreign leaders who marched in Paris to show solidarity with "satanic" France.

AQAP's leader Nasir Abdel Karim al-Wuhayshi was Osama bin Laden's secretary and assistant for many years. He fled to Iran after the fall of the Taliban's Islamic emirate in 2001. Iran handed him over to the Yemeni government two years later, but he broke out of prison in 2006. In January 2009 he announced the formation of AQAP, uniting al-Qaeda's groups in Yemen and Saudi Arabia, and pledged loyalty to bin Laden and Zawahri. In 2013 Zawahri designated Wuhayshi his second-in-command and heir.

Under Wuhayshi's leadership AQAP has repeatedly tried to carry out terrorist attacks in the United States, including the attempt to blow up an aircraft flying from Amsterdam to Detroit on Christmas Day 2009. In a video in March, Wuhayshi said al-Qaeda must "remove the cross and the bearer of the cross, America." The group has the best bomb-making skills in al-Qaeda and through its partner, Jabhat al-Nusra in Syria, it has access to thousands of foreign fighters, especially European Muslims fighting there. Its Inspire magazine has been linked to the Boston marathon attack.

Zawahri was also involved in the 2009 plot. That plot was ordered by Zawahri and masterminded by a Pakistani named Muhammad Ilyas Kashmiri. Kashmiri had been trained by the Pakistani intelligence service and carried out terrorist attacks in India for many years before joining al-Qaeda. He was at one time tasked by bin Laden to plot an assassination plan for President Obama in India; Obama traveled to India in 2010.

In 2009 Kashmiri used an American to reconnoiter the Danish plot. David Headley is an American citizen with a Pakistani father who played a major role in planning and preparing the November 2008 attack on Mumbai. Headley was then working for both Pakistani intelligence and its favorite proxy Lashkar-e-Taiba (Army of the Pure).

Just as Headley had repeatedly visited Mumbai to research the Lashkar-e-Taiba attack between 2005 and 2008, Kashmiri sent him to Copenhagen to research and plan an attack on the Jyllands-Posten offices. Headley also met with an al-Qaeda hit team in Europe to brief them on what he had learned. Kashmiri and Zawahri followed the planning from their hideouts in Pakistan. The plan was to storm the newspaper's office and execute the cartoonists and editors. It would be a mini-Mumbai in the heart of Europe.

The plot came undone in 2009 when Headley was arrested by the FBI at O'Hare International Airport in Chicago as he prepared for another trip to Denmark. He confessed to the plot. Kashmiri died in a drone strike shortly after the SEALs killed bin Laden in Abbottabad, Pakistan in 2011. There have been other plots to strike Denmark since.

The Copenhagen caper puts the Paris tragedy in more perspective. Al-Qaeda's top leadership has been obsessed with the cartoonists who satirize Muhammad since Jyllands-Posten first published its caricatures in 2005. Al-Qaeda leaders clearly see this as an issue that can galvanize Islamic blowback against the West. They are prepared to carefully prepare attacks against the targets even if it takes years of preparation. The propaganda reward from taking "revenge" for "defaming" the prophet is certain to ensure there will be more such attacks.