Despite the existence of Yemen’s new leadership in Aden, fierce combat has wreaked havoc in Shabwa province in southern Yemen. 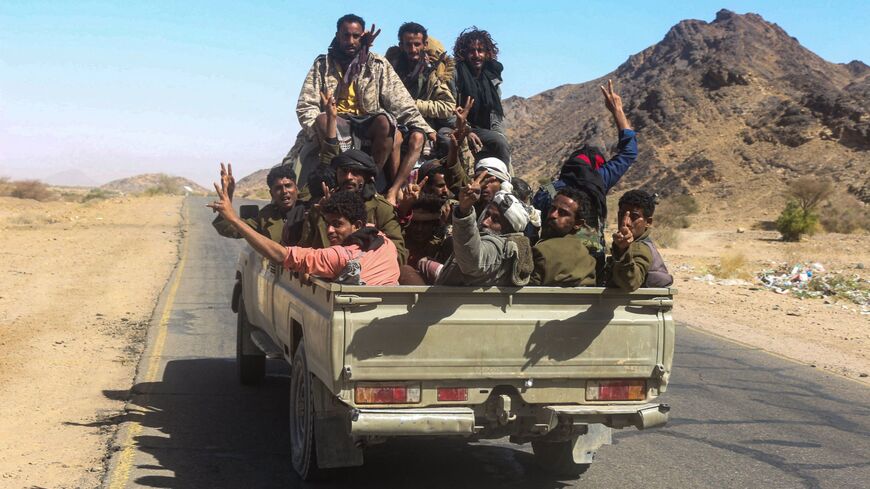 Yemeni pro-government fighters gather in the back of a pick up truck near the district of Harib on Jan. 25, 2022, after Yemen's Houthi rebels were expelled from the key battleground district by UAE-trained Giants Brigade fighters. - SALEH AL-OBEIDI/AFP via Getty Images

Deadly infighting rocked Yemen’s Shabwa province over the last few days, with dozens of deaths and injuries, amid tensions between pro-government forces in Attaq, the capital of Shabwa, an oil-rich province in southern Yemen.

On July 19, the commander of the Special Security Forces, Brig. Gen. Abd Rabbo Lakab, survived an assassination attempt in Attaq. Two of his bodyguards died in the attack, but the commander escaped unscathed. He accused UAE-backed southern separatist forces of orchestrating the assault.

Tensions rose rapidly when Shabwa Governor Awad bin Al Wazir sacked Lakab on Saturday. Al Wazir accused the military units under Lakab of mutiny and warned that those flouting the orders would bear the consequences. The governor said the soldiers are affiliated with Yemen’s Islah Party, an offshoot of the Muslim Brotherhood.

The conflict betrays the fragility of Yemen’s new leadership in Aden and the disharmony among the pro-government forces fighting a common foe: the Iran-backed Houthi group.

The new leadership, known as the Presidential Leadership Council (PLC), took the helm in April after former President Abdurabbu Mansour Hadi conceded power based on a Gulf-sponsored power shakeup.

Preventing infighting among anti-Houthi Yemeni forces is a priority for the PLC. However, the recent hostilities augur ill for Yemen. It also shows the new leadership is unable to unite the various armed forces in the country’s south.

Attaq resident Ali Abdulrahman told Al-Monitor that UAE-supported separatist forces and military units linked to the Islah Party clashed in the city over the last three days, transforming some streets into battlefields.

“We did not expect this horror to happen. Attaq has been safe from conflicts for many years and we thought it would be better under the new leadership. Unfortunately, the opposite has happened,” said Abdulrahman.

As the UN-recognized leadership in the country, the PLC stepped in on Tuesday and removed some military commanders in a bid to de-escalate the situation and stem further infighting. The move did not help, and clashes kept raging on Wednesday.

Southern separatist fighters known as the Giant Forces and Shabwa Defence Forces took over Attaq Wednesday afternoon. The opposing military units withdrew to other districts in the same province. Abdulrahman said, “The situation is still worrying and I am not sure the clashes will stop in Shabwa.”

The development is celebrated by the southerners who hope for secession from Yemen’s north. Ahmed Naji, a pro-secession resident of Shabwa, told Al-Monitor that the south is heading toward independence. He said that freeing Shabwa is crucial to accomplishing that goal.

Yemen’s south and north unified in 1990.

Naji said, “We have tried unity for three decades, and we are fed up with it. We gained nothing. The victory of southern forces in Shabwa will help us proceed to regain our independent country.” He added, “No matter how long our struggle goes on, we will not give up. We will sacrifice what we can to regain independence and be an independent country recognized by the international community.”

While the southern separatists cheer, many other Yemenis see the violence as another setback for Yemen and an explicit failure of the PLC.

Yemeni political researcher and author Adel Dashela told Al-Monitor that what happened in Shabwa heralds a bleak future for Yemen and attests to the magnitude of the foreign influence on the country.

“The PLC has become a tool in the hand of the Arab coalition. There is no genuine political or military partnership between Yemen’s leadership and the coalition. What the coalition plans and proposes, the PLC will execute. This will deepen fractures and add to the complexity of the conflict,” Dashela said.

Abdulaziz Jubari, the deputy head of the Yemeni Parliament, said he discussed the infighting in Shabwa with the president of the PLC, Rashad Al-Alimi, in a phone call.

Jubari said he told him, “I am afraid that your council will be a tool to divide Yemen into cantons.” Al-Alimi replied, “There is no such talk except in our heads as Yemenis. Our brothers [Saudi Arabia and the UAE] are keen on Yemen’s unity and stability.”

However, the conduct of the southern fighters after their victory in Shabwa on Wednesday exposes their separatist inclinations. They brought down the flag of united Yemen and raised the flag of the pre-unity southern state.

A political analyst in Shabwa described the takeover of Attaq as the last nail in the coffin of Yemen’s unity. He told Al-Monitor, “The secessionists used to have a strong presence in all southern provinces except for Shabwa. Now they have taken over this province, and the path to parting from Yemen’s north is easier than before. The separatists will be able to achieve their goal if the Saudi-Emirati support continues.”

He added, “This infighting in Shabwa is a shock to Yemenis nationwide and it has revealed that the new leadership is incapable of lifting Yemen from the mayhem, at least in Houthi-free areas.”

While the UN Security Council and other countries worldwide still recognize the legitimacy of the Yemeni government headquartered in Aden, its popularity and legitimacy are eroding in line with Houthi dominance in Yemen’s north and the separatists’ prevalence in the south.