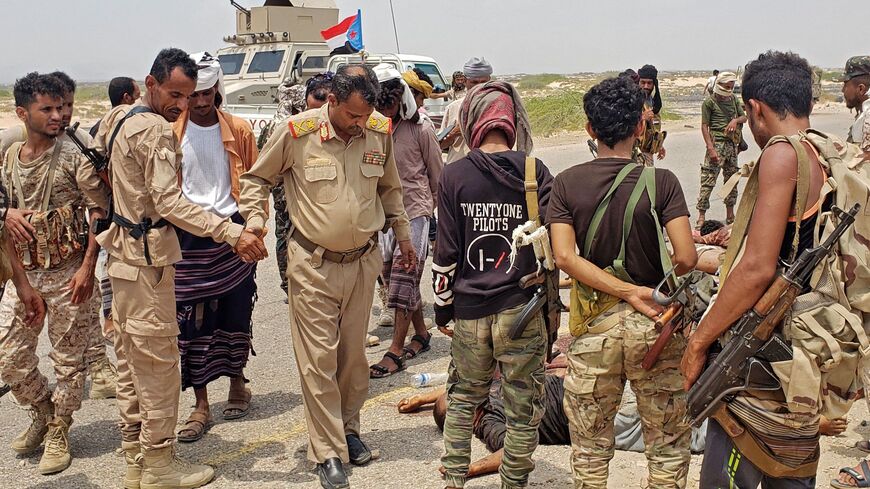 Brig. Gen. Abu Bakr Hussein Salem (3rd-L), governor of Yemen's southern province of Abyan, and other security personnel inspect the bodies of members of al-Qaeda who were shot after attacking a security checkpoint of the UAE-trained Security Belt group in Ahwar district on Sept. 6, 2022. - AFP via Getty Images

SANAA, Yemen — Terror groups are still finding room to operate in in Yemen. On Sept. 6, an attack attributed to the al-Qaeda terrorist group killed 21 separatist soldiers in Ahwar district of Abyan province in southern Yemen.

With machine guns and hand grenades, the radical militants hit a checkpoint manned by the Security Belt Forces, a military unit affiliated with the Southern Transitional Council (STC). The clash also left six of the attackers dead.

Reacting to the attack, the authorities in southern Yemen vowed to continue their war on terror. The internationally recognized government's Defense Minister Mohsen Al-Daeri said the incident will not deter the armed forces from countering terrorist organizations and that there is a need for greater coordination among security forces.

Though the government and the separatists have been at loggerheads in southern Yemen, both sides condemned the killing of 21 soldiers. STC head Aidrous Al-Zubaidi also pledged to continue the fight against terrorist organizations in the south. He said in a Sept. 6 statement,"The battle against terrorism in all its forms continues, and it will not cease until every inch of the southern territory is purged of terrorism."

While officials vow to punish the radicals, their attacks continue to threaten the safety of soldiers and citizens alike. On Sept. 10, southern fighters began a campaign to hunt down al-Qaeda operatives in rugged areas in Shabwa. Hours after the operation began, a roadside bomb killed two soldiers in the provincial capital of Attaq.

Infighting has destabilized this part of the country since 2017, worsened by terror activity.

Abyan resident Mohammed Abdulrahman told Al-Monitor that the area has had enough trouble. Infighting and economic issues have made life hard and the terrorism will make the suffering worse. Abdulrahman said that security needs to be tightened to defeat terrorism, but it isn't possible because of the power struggle.

Al-Qaeda in the Arabian Peninsula (AQAP) came into being in 2009. The United States and the former regime of late President Ali Abdulla Saleh cooperated to subdue terrorism Yemen for years. But then the turbulence of the 2011 popular uprising allowed militant groups including the Iran-allied Houthis to expand.

The Houthis have controlled Yemen's north since 2015, while the south has been split between the southern separatists and the Yemeni government. In April 2015, al-Qaeda fighters seized the coastal city of Al-Mukkala in Hadramout province as the government troops retreated.

The Saudi-led Arab coalition recaptured Al-Mukkala in April 2016 and reportedly killed 800 al-Qaeda affiliates. Today, al-Qaeda is still active in some pockets in the south, as the Abyan attack illustrates.

An Aden-based security researcher told Al-Monitor that the Yemeni government and the STC have been overly focused on each other, ignoring the danger of al-Qaeda. "The south is free from the Houthi militia, but it is not safe from extremists. Downplaying or disregarding the presence of terror operatives is an enormous mistake, and they and the population will pay the price."

Yemeni political researcher and author Adel Dashela said that neither the separatists nor the Yemeni government are able to defeat the radical groups. Dashela told Al-Monitor, "Confronting such extremist movements requires strategic cooperation between regional powers, the international community and the Yemeni government forces."

He went on, "During the regime of late President Saleh, Yemen was politically stable and had well-trained counter-terrorism forces, but it was not enough to uproot the terrorist threat. With the continued deep divisions between the government and the secessionists today, crushing terror elements is not possible."

Dashela concluded, "The situation may spiral out of control unless the military units of the government and the STC are integrated under one leadership. The persistent separatist takeovers of southern cities will create other militant groups, including these radical elements. This will add to instability and chaos in south Yemen."