A spokesperson for the coalition said the missile was among more than 300 launched by the rebels since 2015. 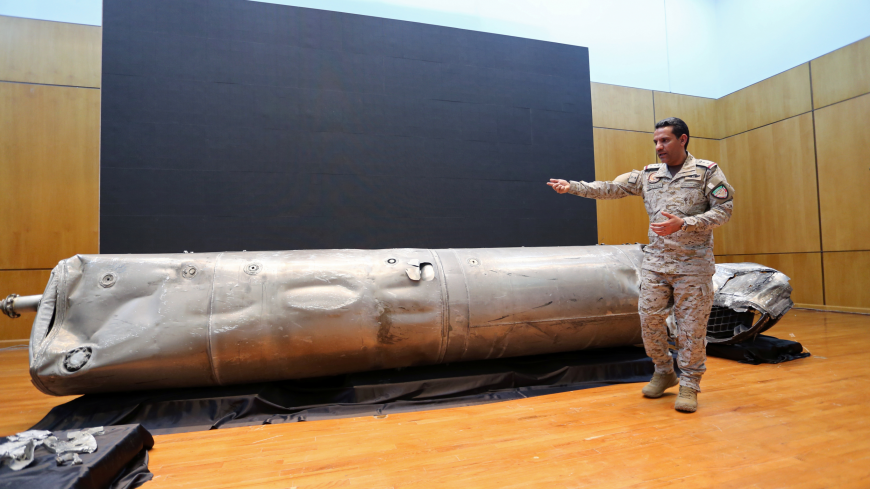 Saudi-led coalition spokesman Col. Turki al-Malki speaks as he displays the debris of a ballistic missile he says was launched by Yemen's Houthi group toward the Saudi capital, Riyadh, during a news conference in Riyadh, March 29, 2020. - REUTERS/Ahmed Yosri

The Saudi-led coalition in Yemen said today that it had intercepted ballistic missiles fired by the Houthi rebels, marking the latest foiled assault on Saudi Arabia.

A spokesman for the coalition said the Iran-backed group launched the missile from Sa’dah in northwestern Yemen toward the southern Saudi region of Najran “in a deliberate attempt to target civilians and civilian objects.”

The Houthi group has fired a total of 313 missiles and 35 drones toward the kingdom since 2015, Col. Turki al-Maliki said in a statement carried by the Saudi Press Agency.

The coalition also said it earlier intercepted several armed drones launched toward the southern Saudi city of Khamis Mushait. The Houthis claimed responsibility today for the drones, which a spokesperson said were targeting an airport and came in response to coalition airstrikes.

The Arab world’s poorest country has been embroiled in civil war since 2014, when the Houthis took control of Yemen's capital and captured large swaths of the country from pro-government forces. Saudi Arabia leads a Western-backed military coalition that intervened the following year to restore the internationally recognized government.

A cease-fire designed to bring a pause in the fighting and allow humanitarians to focus on combating the coronavirus expired last month. Yemen has confirmed close to 900 cases of COVID-19, most recorded by the Aden-based government in the south.

On Monday, the United Nations removed the Saudi-led coalition from its blacklist of countries violating children’s rights. In his annual report to the Security Council, UN Secretary-General Antonio Guterres wrote that the coalition killed or injured 222 children in Yemen last year, a drop from 729 the year before. The Houthis and the Yemeni government remain on the list and according to Guterres were responsible for the deaths of or injuries to 313 and 96 children, respectively. The report also said that responsibility for 482 child casualties could not be attributed and that 276 casualties "occurred during crossfire between various parties to the conflict."