The US State Department says it would have to "fully consider the humanitarian implications" of the Houthis' redesignation as a terrorist group. 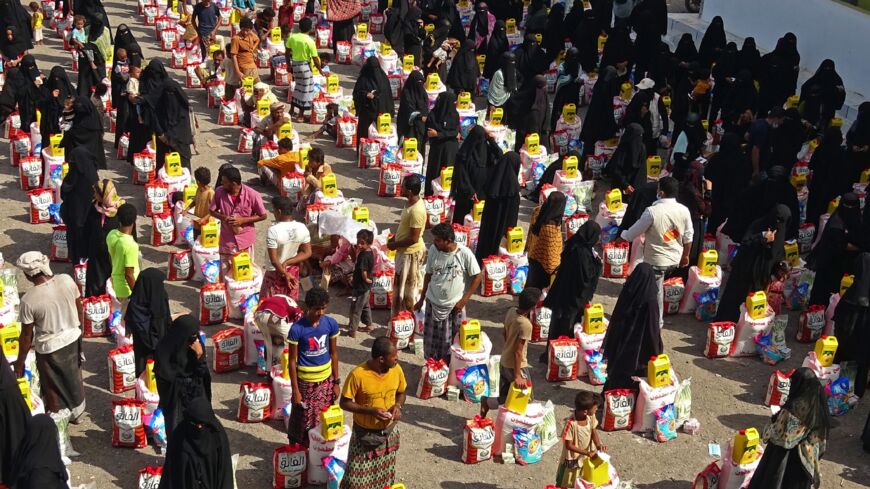 Aid agencies operating in Yemen were caught off guard by President Joe Biden’s recent comment that he is considering redesignating the Houthi movement as a terrorist organization, an action that relief workers say would compound the already dire humanitarian crisis in the Arab world’s poorest country.

The United Arab Emirates has urged the United States to classify the Iran-backed group as a foreign terrorist organization following the Houthis' deadly drone and missile attack on Abu Dhabi earlier this week. The Emirati ambassador to the United States, Yousef Al-Otaiba, recommended the Houthis’ blacklisting during a meeting with US national security adviser Jake Sullivan on Wednesday.

The Trump administration designated the Houthis in January 2021 despite months of appeals from aid groups who said the terror label would complicate the delivery of aid and commercial imports into war-torn Yemen, much of which is under the Houthis’ de facto control.

At the time, several now-members of the Biden administration took issue with former President Donald Trump’s 11th-hour designation, including Sullivan, who said the labeling would “inflict more suffering on Yemeni people and impede diplomacy.” The State Department revoked the terror designation of Houthis, also known as Ansar Allah, within the first month of Biden’s presidency in a decision spokesperson Ned Price said had “nothing to do” with the rebels’ “reprehensible conduct.”

In the year since, the Houthis have ramped up their drone and missile attacks on neighboring Saudi Arabia, and on Monday the group’s aerial assault on Abu Dhabi’s airport and state-owned fuel depot killed three people. The Saudi-led military coalition responded with airstrikes in the Houthi-held capital, Sanaa, that reportedly left at least 20 people dead, including civilians.

In a wide-ranging press conference on Wednesday, Biden said that ending the seven-year war, which has pitted the Houthis against Yemen’s Saudi-backed internationally recognized government,  is “​​going to be very difficult.”

The Houthis’ redesignation, Biden said, is “under consideration.” The comment set off alarm bells within aid agencies, who last year pushed hard for Biden to reverse Trump’s move and say the rationale for doing so remains the same.

“We have a duty to take it seriously. The president of the United States just suggested he’s considering a step that could turn a country in crisis upside down,” Paul said.

Yemen is considered by the United Nations to be the world’s worst humanitarian crisis. An estimated 80% of the population — more than 24 million people — is reliant on outside assistance to survive, and the country is constantly deemed to be on the brink of famine.

"We said repeatedly in the past that designating Ansar Allah a terrorist organization would have far-reaching impacts on Yemen's already dire humanitarian situation, and we think the same today,” said Erin Hutchinson, Norwegian Refugee Council’s country director for Yemen.

“The US government must ensure that any sanctions do not block food, fuel, medicines, and other essential goods and services from entering the country and reaching people in need,” Hutchinson said.

A majority of Yemen’s population lives in Houthi-controlled areas. Aid organizations operating there must cooperate on some level with the Iran-aligned group, including by paying taxes to Houthi authorities and obtaining the group’s permission to deliver food, medicine and other assistance.

To mitigate the impact on aid workers, Trump’s Treasury Department issued broad licenses allowing a wide array of transactions with the Houthis. But the weekslong blacklisting still produced a chilling effect among commercial suppliers, observers said.

“So far, we have not seen anything over the past year that would change this assessment,” Haq told Al-Monitor.

Reached for comment, a State Department spokesperson said the Houthi designation is under consideration and that the United States “would have to fully consider the humanitarian implications.”