Relief organizations in Yemen warn the designation will hamstring their life-saving work in a country already considered to have the world's worst humanitarian crisis. 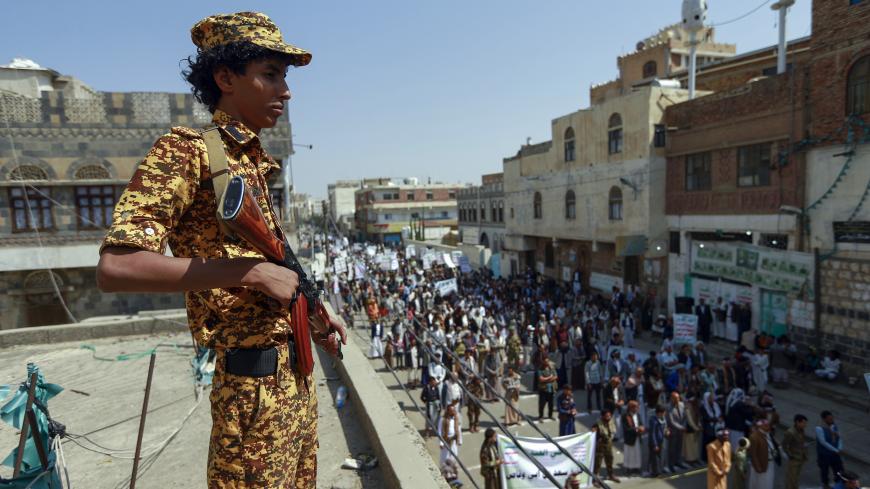 A fighter loyal to Yemen's Houthi rebels stands guard during a rally commemorating the death of Shiite Imam Zaid bin Ali in the capital, Sanaa, on Sept. 14, 2020. - MOHAMMED HUWAIS/AFP via Getty Images

The Trump administration will designate Yemen’s Houthis as a foreign terrorist organization, Secretary of State Mike Pompeo said late Sunday, despite months of pleading from relief organizations who say the move will bring aid delivery in the war-torn country to a standstill.

Pompeo will notify Congress of his intention to designate the Iran-aligned group, which is mired in a six-year-long civil war against a Saudi-led military coalition supporting the internationally recognized government in Yemen. In a statement emailed to reporters, the secretary of state said the move holds the Houthis responsible for terrorist acts in Yemen, a country considered by the United Nations to be the world’s worst humanitarian crisis.

“If Ansar Allah did not behave like a terrorist organization, we would not designate it as an FTO (Foreign Terrorist Organization) and SDGT (Specially Designated Global Terrorist),” Pompeo said, using the Houthis’ formal name. “It has led a brutal campaign that has killed many people, continues to destabilize the region and denies Yemenis a peaceful solution to the conflict in their country.”

The move, which also includes the labeling of three Houthi leaders as specially designated global terrorists, takes effect on Jan. 19 — a day before President-elect Joe Biden's inauguration. In his statement, Pompeo said the designations were intended to advance peace efforts aimed at ensuring Yemen is “free from Iranian interference and at peace with its neighbors.”

“The bottom line is, they couldn’t articulate a strategic rationale to Congress for doing this, and that’s telling,” said a former US official who worked on Yemen.

“I don’t see how this gets them any closer to progress on the peace process,” the former official said, noting that the risk to the humanitarian mission is “substantial.”

Aid groups working in the region’s poorest country have warned of the unintended consequences the designations could have on ordinary Yemenis, a majority of whom require humanitarian assistance to survive. A group of former senior US national security officials, that included former Deputy Assistant Secretary of Defense Mick Mulroy and Biden’s pick for CIA director, former Deputy Secretary of State William Burns, also warned against designating the Houthis, for similar reasons.

For the past two months, humanitarian organizations have been working to understand the impact of a potential designation, but say they’ve been unable to adequately prepare without guidance from the State Department on when a designation would come and in what form it would take.

"Everything remains very unclear right now,” a UN official in Yemen said. "About the only thing that is clear is the human cost. Our ability to deliver aid just got a whole lot harder.”

Relief agencies were not formally notified by the State Department ahead of Sunday’s announcement, sources at multiple agencies told Al-Monitor, although some held a meeting with officials from State and the US Agency for International Development (USAID) in November.

“They wanted to ask us how long would it be for us to get our act together, more or less, and get ready for the new reality. And our response was, what’s the new reality?” one aid worker said.

It’s illegal for US nationals to provide “material support or resources” to a designated terrorist group. But in Yemen, the Houthis are the de facto authorities in an area covering roughly 80% of Yemen’s population and for aid groups to get any work done, they must coordinate with rebel-run government agencies, pay taxes to Houthi authorities and obtain the group’s permission to deliver aid. A Houthi blacklisting puts aid workers at risk of prosecution for doing so.

Pompeo said the administration recognizes these concerns and will put in place measures, including licenses issued by the Treasury Department, to reduce the designation’s impact on certain humanitarian activity and imports.

But aid organizations say the application process for such licenses is time-consuming and could further delay the delivery of assistance to a country on the brink of famine. They’re also concerned about their ability to transfer money if banks decide it’s not worth the risk to continue doing business with them. They point to Somalia, where a foreign terrorist designation of Islamist militant group Al-Shabaab in 2008 produced a chilling effect on banks and businesses that hampered the delivery of aid during the country's deadly famine.

The Trump administration’s move has also raised fears that the Houthis could retaliate against US and other foreign aid workers. After news of a possible designation surfaced in November, a number of Americans working for the UN and other relief agencies were pulled out of the Houthi-held capital of Sanaa.

“We reserve the right to respond to any designation issued by the Trump administration or any administration,” Houthi official Mohammed Ali al-Houthi tweeted on Monday, blasting the United States as the “actual partner in killing and starving” Yemen’s people.

The Houthi decision is seen as part of the Trump administration’s maximum pressure campaign on the group’s regional backer, Iran. In recent months, the administration has unveiled a series of sanctions against Iranian targets that observers say could complicate the incoming administration’s efforts to revive diplomacy with Iran and rejoin the landmark nuclear agreement.

Relief organizations are calling on Biden, who has promised to end US support for the Saudi-led coalition in Yemen, to immediately revoke the terror designation when he takes office later this month. But even if the decision is walked back, some of the damage may be irreversible, warns Oxfam America’s humanitarian policy lead Scott Paul.

“Shutting down a humanitarian operation is like turning off a light switch, and scaling one up is like rewiring an entire house,” he said.

In addition to the many operational challenges, aid agencies will be left dealing with a more impoverished population that “may not trust us because we will have left in the middle of a horrific emergency,” said Paul.

The Trump administration drew outrage in the aid community last year when it cut US assistance to Houthi-held northern Yemen over concerns the rebels were interfering with the distribution of humanitarian supplies. Pompeo in his statement Sunday noted that the United States was the largest humanitarian donor to Yemen last year, providing $630 million in humanitarian assistance.