Biden under pressure to reverse Trump's aid cuts in Yemen 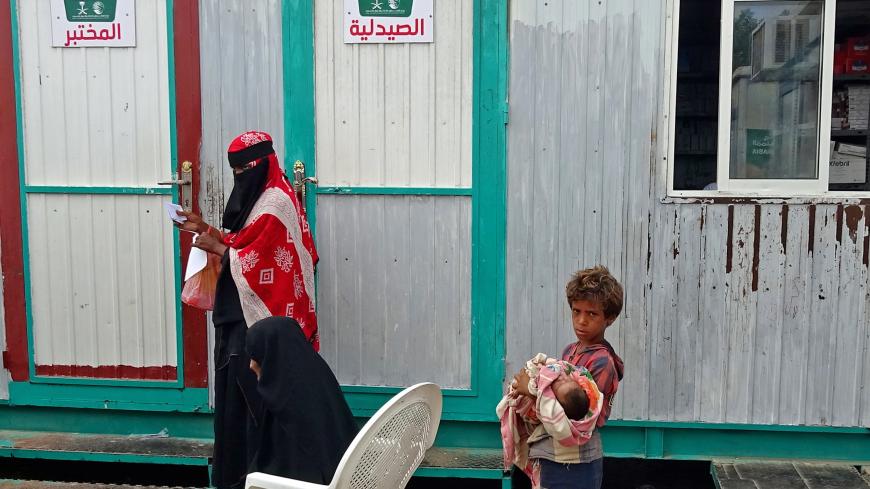 Displaced Yemenis wait for their turn at a health clinic of the King Salman Humanitarian Aid and Relief Center (KSrelief) in Yemen's war-ravaged western province of Hodeida, on Feb. 24, 2021. - KHALED ZIAD/AFP via Getty Images

As impoverished Yemen edges closer to famine, activists and lawmakers are ramping up pressure on the White House to restore tens of millions of dollars in humanitarian assistance that was suspended by the Donald Trump administration last year.

“Particularly in complex and protracted emergencies such as the one in Yemen, the delivery of neutral, impartial, and needs-based assistance is a humanitarian imperative," the senators said.

Their call comes nearly a year after USAID suspended $73 million in aid to Houthi-held northern Yemen last March, citing concerns the Iran-aligned rebels were interfering with the distribution of humanitarian supplies. USAID set aside carve-outs to provide funding for “critical NGO activity” but aid agencies have described the exemptions as too narrow to be effective.

“This needless suffering will only be compounded by the ongoing USAID suspension,” a coalition of anti-war and civil society groups said in a letter to President Joe Biden last week. “We are alarmed that, regardless of Houthi activity, the brunt of this ongoing suspension will be borne by vulnerable civilians, and not by Houthi officials and commanders.”

The letter's signatories point out that the Houthis have eased up on their obstruction, dropping their demand for a 2% tax on humanitarian activities and allowing nongovernmental organizations to use biometrics to monitor fraud.

In a letter to Blinken and Steele last week, Rep. Ted Deutch (D-Fla.) led a group of Democratic lawmakers calling for the United States to “expedite, restore, and expand” humanitarian assistance to Yemen, arguing that doing so is “vital to encourage other countries to meet their pledges.”

An aid official speaking to Al-Monitor on background echoed those concerns: “It’s very hard to push others to pledge when your stated policy is we’re cutting off aid to much of the country because we don’t believe aid is getting to where it needs to get.”

As the six-year-old war drags on, the United Nations has struggled to rally international funding for Yemen, the Arab world’s poorest country. A virtual conference held on Monday raised less than half of the UN’s $3.85 billion target, meaning more UN aid agencies will see their life-saving services put on the chopping block.

Blinken announced nearly $191 million in additional humanitarian assistance for Yemen. In a statement, he said the United States “remains committed to delivering aid to the most vulnerable in Yemen,” but despite growing calls to do so, didn’t reveal plans to reverse the Trump-era funding freeze.

"The situation is extremely serious with food rations halved for millions of people in the face of a dire famine warning," said Sultana Begum, the Norweigen Refugee Council's advocacy manager in Yemen. "The Biden administration has an opportunity to help turn around the situation in Yemen."

The push to restore aid to Houthi-controlled northern Yemen comes as pressure builds on the Biden administration over its handling of the rebel group. Last month, the United States reversed the Trump administration’s terrorist designation of the Houthis in a move welcomed by aid agencies who warned the rebels' blacklisting would complicate their humanitarian work and cut off commercial imports.

But the Biden team is under fire for lifting the terror label without securing any concessions from the Houthis, who have since mounted a series of cross-border attacks targeting Saudi Arabia. Rolling out humanitarian assistance to Houthi-held areas could be complicated by accusations that the reversal, combined with Biden ending support for the Saudi-led coalition in Yemen, was an unintended gift to the Houthis.

“They’re going to have to walk it back,” an aid official said of the US funding suspension. “I think they’re just trying to figure out, what’s the way to do the walk back that saves the most face and does the least harm?”

The Biden administion announced sanctions on two of the group's leaders Tuesday, accusing the Houthis of fueling "the dire humanitarian plight of the Yemeni people."

A humanitarian disaster looms in Yemen’s Marib province, where the Houthis have stepped up their offensive on the Saudi-backed government’s last stronghold in the north. The oil-rich province’s population has swelled during the war to include some 850,000 displaced people, who aid groups warn will have nowhere safe to turn if the Houthis are successful in capturing Marib city.

The assault on Marib comes as UN agencies warn of a growing hunger crisis across Yemen made worse by the funding shortage. Without urgent treatment, as many as 400,000 Yemeni children under the age of five are at risk of dying from acute malnutrition this year.

Aisha Jumaan, president and founder of the Yemen Relief and Reconstruction Foundation, called on the conflict’s warring parties to stop holding aid to Yemen’s population “hostage” to their demands.

“Yemeni children are not starving. They are being starved,” Jumaan said.