The Trump administration is weighing whether to designate the Iran-aligned rebel group as a foreign terrorist organization. 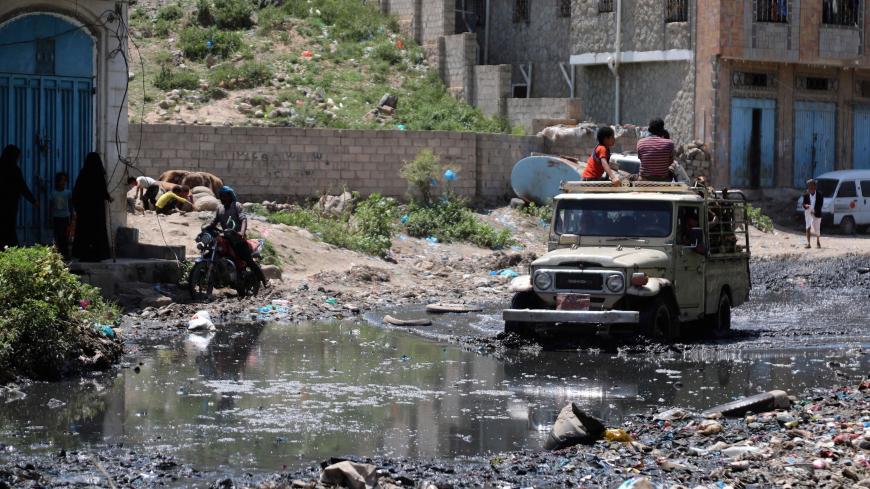 A jeep drives in a street flooded by open sewers and covered with scattered rubbish in the Yemeni city of Taez, Sept. 19, 2020. - AHMAD AL-BASHA/AFP via Getty Images

Should the Trump administration formally designate Yemen’s Houthi rebels as a terrorist organization, aid groups say it would greatly undermine their ability to deliver life-saving assistance to millions of civilians and worsen what the United Nations calls the world’s worst humanitarian catastrophe.

In an effort to financially squeeze the Houthi group and pressure its regional backer, Iran, the State Department is considering naming the entire Houthi movement a foreign terrorist organization, as reported by Foreign Policy earlier this week. Saudi Arabia has lobbied hard for the terrorism designation, which would criminalize material support for the Houthis, trigger an asset freeze and impose a travel ban to the United States. The Trump administration might instead designate individual Houthi leaders as specially designated global terrorists, said a source familiar with the matter, in a mostly symbolic action that carries similar financial sanctions.

The Iran-aligned group has waged a nearly six-year war in Yemen against a Saudi-led military coalition that intervened in early 2015 to restore the internationally recognized government. The fighting killed more than 100,000 people, devastated Yemen’s health infrastructure and pushed the impoverished country to the brink of famine.

Relief organizations operating in Yemen warn that slapping a terror label on the Houthis could hamper aid work in a country where an estimated 80% of the population — more than 24 million people — is reliant on humanitarian assistance to survive, a majority of whom live in Houthi-controlled areas in the country’s mountainous north.

“For millions of Yemenis living in areas under Ansar Allah [Houthi] control, aid is a matter of life or death. We don’t want to think about what will happen if that lifeline is cut,” Sultana Begum, the Norweigen Refugee Council’s advocacy manager in Yemen, told Al-Monitor.

A terror designation would further complicate Yemen’s humanitarian response, with aid workers forced to spend more time and resources ensuring they’re in compliance with a confusing web of financial sanctions. The Treasury Department could issue exemptions known as general licenses to authorize specific humanitarian activities, but the application process is time-consuming and could delay the delivery of aid.

“Even if a humanitarian exemption is permitted, this designation will likely make reaching children and families more difficult and could also heighten security risks for our staff,” Janti Soeripto, president and CEO of Save the Children, told Al-Monitor.

Soeripto said lessons can be drawn from Somalia, where the Barack Obama administration’s foreign terrorist designation of Islamist militant group Al-Shabaab deterred risk-averse banks from transfering money into the country and slowed the work of relief agencies amid a deadly famine that killed an estimated 250,000 people in 2011.

“We must learn from history and not condemn Yemeni children and their families to the same fate,” Soeripto said, adding that current evidence suggests a worsening malnutrition crisis for Yemeni children.

Relief groups say a Houthi designation could also put off international donors at a time when an existing funding shortage is crippling aid operations in the Arab world’s poorest country. This year, the United Nations has received less than half of the $3.4 billion it requested from donor countries, forcing many UN aid agencies to scale back or eliminate services entirely.

The Donald Trump administration, which has accused the rebels of interfering with the food deliveries, suspended millions in humanitarian funding to Houthi-held areas in March. The US development agency USAID has set aside carve-outs for life-saving assistance, but aid workers say they are far too narrow to be effective.

Six of the largest humanitarian responders in Yemen wrote to acting USAID administrator John Barsa in August and urged him to restore US assistance, warning that civilians were increasingly paying the price for aid cuts. President-elect Joe Biden, who has pledged to end US support for Riyadh's campaign in Yemen, is expected to return funding to previous levels.

The fighting, meanwhile, has dragged on in Yemen's oil-rich Marib province as the Houthis try to wrest control of the Saudi-backed government’s last stronghold. Prospects for reaching a political settlement look dim and critics of designating the Houthis as a terror group say doing so could hinder the UN’s work to secure a lasting cease-fire.

“The reality is that the Houthis must be part of any final negotiated settlement to the conflict in Yemen, and designating them a foreign terrorist organization could be taken by the Houthis as a signal that they cannot achieve their goals at the negotiating table,” said Kate Kizer, the policy director for the advocacy group Win Without War.

“That's a recipe for more war and suffering for the Yemeni people, not peace,” she said.