In the wake of aerial attacks on United Arab Emirates claimed by Yemen’s Houthi rebels, the US special envoy for Yemen will travel to the Gulf this week. 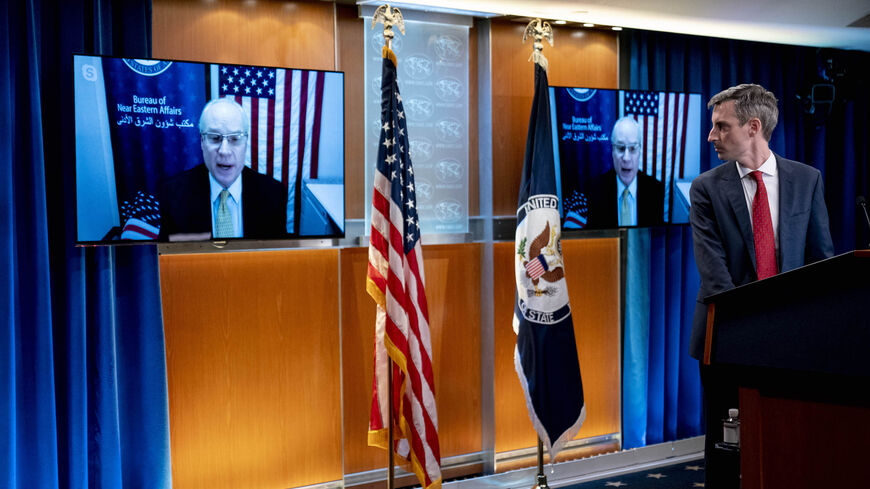 US special envoy for Yemen Timothy Lenderking, accompanied by State Department spokesman Ned Price, right, speaks via teleconference during a news conference at the State Department in Washington, DC on Feb. 16, 2021. - ANDREW HARNIK/AFP via Getty Images

The US special envoy for Yemen will travel to the Gulf region and London this week in an effort to reinvigorate peace efforts, the State Department said Wednesday.

Timothy Lenderking will “press the parties to de-escalate militarily and seize the new year to participate fully in an inclusive UN-led peace process,” the State Department said.

His visit follows aerial attacks on United Arab Emirates Monday that were claimed by Yemen’s Houthi rebels, who said they used missiles and drones on Abu Dhabi’s state-owned oil facility and airport. The Houthi attack, which destroyed several fuel tankers and killed at least three people, was met with retaliatory airstrikes from the Saudi-led military coalition on Tuesday. The coalition strikes on the capital Sanaa killed at least 20 people, including civilians, the Houthis said.

The Iran-backed rebels regularly launch cross-border attacks on Saudi Arabia, but Monday’s attack marked the first on Emirati soil acknowledged by the UAE. Several weeks ago, the Houthis seized an Emirati-flagged vessel in the Red Sea.

Yemen has been embroiled in chaos since the Houthis overran much of the country, including Sanaa, in 2014 and expelled the internationally recognized government led by President Abed Rabbo Mansour Hadi. A US-backed, Saudi-led military coalition intervened in the conflict in March 2015 to restore the Yemeni government.

After seven years of conflict, around half the population in the Arab world’s poorest country is considered food insecure. The State Department said Lenderking’s visit this week will also focus on addressing Yemen’s dire humanitarian and economic crises.

“It is imperative that donors, especially regional donors, provide additional funding and that all parties to the conflict take steps to improve humanitarian access and address Yemen’s fuel crisis,” the department said.

Following Monday’s attack, Axios reports that the UAE reportedly asked the Biden administration to redesignate the Houthis as a terrorist organization. Biden revoked the Trump administration’s designation in February 2021 following pressure from aid agencies who warned the rebels' blacklisting would complicate their humanitarian work and cut off commercial imports.