US urges Iran-backed Houthis to halt attacks on Yemen's ports

The warning to the Houthis comes as US Special Envoy for Yemen Tim Lenderking returns to the region to push for peace between the country's warring sides. 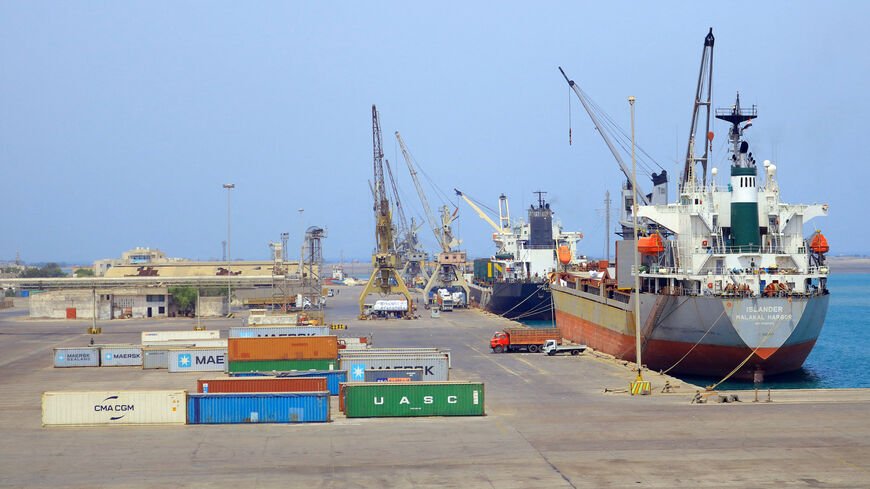 A picture taken on May 28, 2022, shows loading docks at the port of Yemen's Red Sea coastal city of Hodeida. - AFP via Getty Images

Nearly two months after the collapse of a fragile truce in Yemen, the Biden administration called Monday on the country’s Houthi rebels to halt their attacks on ports that risk reigniting a full-fledged conflict.

In recent weeks the Iran-backed group has carried out several attacks on oil terminals and seaports in government-held areas, disrupting the flow of crude exports and increasing pressure on negotiators seeking to revive a truce agreement between Yemen’s warring parties.

Most recently, the Houthis fired a projectile from a drone on the al-Dhabba oil terminal in Yemen’s Hadhramaut province last week, Reuters reported. The group has also attacked the Qena commercial port in the southern Shabwa province.

“We call on the Houthis to immediately cease their attacks on Yemeni ports,” the State Department said in a statement Monday. “Such attacks only risk plunging Yemenis into another pointless cycle of violence and suffering.”

The appeal to the Houthis comes as US Special Envoy for Yemen Tim Lenderking is visiting Oman and Saudi Arabia in a diplomatic push to renew the United Nations-brokered truce that collapsed in early October. Lenderking has put the blame for the truce’s collapse squarely on the Houthis, whose last-minute demands over unpaid public sector salaries “hijacked” the negotiations.

From April to October, the truce led to a 60% reduction in casualties, established limited international flights from the airport in rebel-held Sanaa and increased fuel shipments to the Houthi-controlled port of Hodeidah.

The six-month pause in fighting also offered hope that the Houthis and the Saudi-backed Yemeni government could find a negotiated way out of an eight-year war that’s killed hundreds of thousands of Yemenis and repeatedly pushed the impoverished country to the brink of famine.

“At this critical moment, we remind the Houthis that Yemenis are calling for peace, not a return to war,” the State Department said Monday, urging the rebels to “instead seize this opportunity for peace.”

The Houthis overran much of Yemen, including Sanaa, in 2014 and expelled the internationally recognized government led by President Abed Rabbo Mansour Hadi. A military coalition led by Saudi Arabia and the United Arab Emirates intervened in the conflict in March 2015 in an effort to restore the exiled Yemeni government. The bloody conflict between the Saudi and Iran-backed forces slowed to a stalemate before the UN-mediated truce was reached in April.

Iran had expressed support for the fragile truce despite continued accusations from Washington that it is supplying the Houthis with weapons in violation of a UN arms embargo. US officials say the arms transfers as well as training from Iran’s Islamic Revolutionary Guard Corps have enabled the Houthis to carry out drone and missile attacks on neighboring Saudi Arabia.

Tehran says it provides the Houthis with political support, not weapons.

Earlier this month, the US Navy and Coast Guard intercepted a ship in the Gulf of Oman headed from Iran to Yemen with enough explosive materials on board to fuel more than a dozen medium-range ballistic missiles.