US calls on Yemen's Houthis to release embassy staff

US Special Envoy Yemen Tim Lenderking said the rebels' detention of US and UN staff "sends an extremely negative signal." 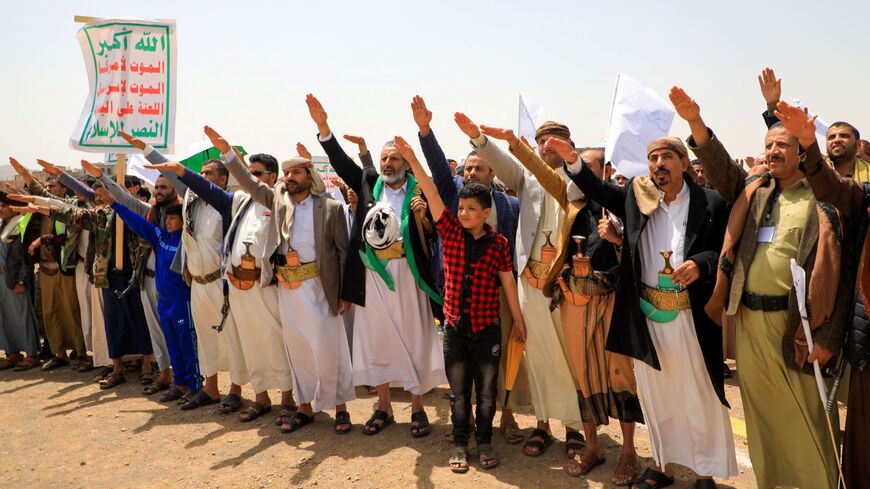 Supporters of Yemen's Shiite Huthi rebels gesture during a gathering to commemorate Eid al-Ghadir in the Huthi-held capital Sanaa on July 17, 2022. - MOHAMMED HUWAIS/AFP via Getty Images

Yemen’s Houthis continue to detain 12 current and former employees of the United States and United Nations in the rebel-held capital of Sanaa, US Special Envoy for Yemen Tim Lenderking said on Thursday.

“This detention, we feel, sends an extremely negative signal,” Lenderking said in a phone briefing with reporters. “We want to see a demonstration of good faith by the Houthis releasing these individuals unconditionally.”

Why it matters: Last November, the Biden administration announced that the Houthis had stormed the shuttered US Embassy compound in Yemen and detained dozens of locally employed staff. Many were later released with the help of Oman, which has long acted as a mediator in Yemen’s war.

In May, the Biden administration announced the death of Abdulhameed Al-Ajami, a retired Yemeni US Embassy employee who was detained by the Houthis in November 2021. Before his death, the Houthis denied Al-Ajami contact with his family for six months.

The Iran-backed Houthis overran much of Yemen, including Sanaa, in 2014 and expelled the internationally recognized government led by President Abed Rabbo Mansour Hadi. As the civil war escalated in 2015, the United States suspended operations at its embassy and established a remote mission in neighboring Saudi Arabia. Since then, Yemeni staff have continued to work at the embassy in a caretaker capacity including as security guards.

What’s next: Lenderking also called on the Houthis to fulfill their obligations under a UN-mediated truce that since April has brought a period of relative calm to war-torn Yemen. The fragile truce requires the Houthis to reopen the roads into Taiz, a Yemeni city under siege-like conditions since 2015.

“We're going to need a compromise from all sides to make progress, which includes initial Houthi action to open the main roads to Taiz,” Lenderking told reporters.

Know more: In The Takeaway newsletter this week, Elizabeth Hagedorn and Andrew Parasiliti report on the prospects for an expanded truce in Yemen, which could hinge on whether the warring parties can agree on salaries for civil servant workers who’ve gone unpaid for years.