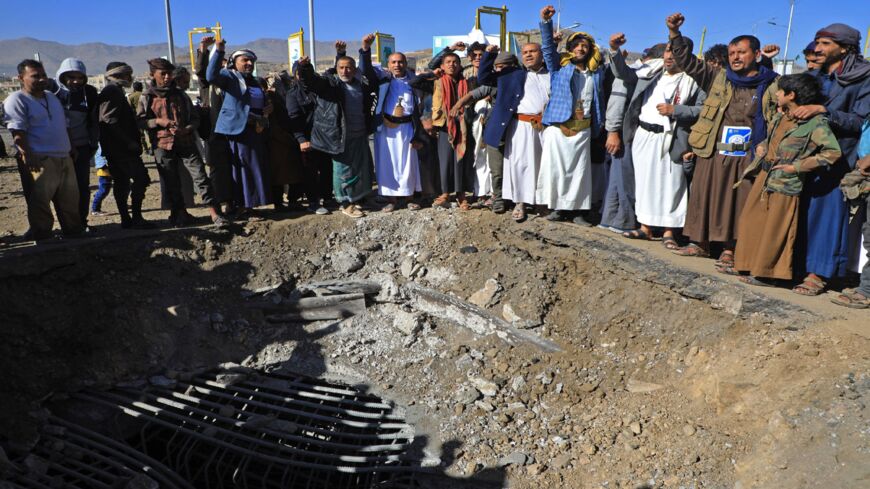 Yemenis inspect a crater following a reported airstrike by the Saudi-led coalition targeting a road at al-Sabeen square in the Houthi rebel-held capital, Sanaa, on Dec. 23, 2021. - MOHAMMED HUWAIS/AFP via Getty Images

The Saudi-led coalition in Yemen accused the Houthis on Monday of “hijacking” an Emirati-flagged vessel in the Red Sea that it claimed was carrying medical supplies but which the rebels described as a military cargo ship.

“The cargo ship Rawabi sailing under the flag of the United Arab Emirates was targeted through piracy and hijacking while sailing off the coast of al-Hodeidah governorate,” coalition spokesman Turki al-Malki said in a statement carried by the Saudi Press Agency.

Malki called on the Houthis to “promptly release the ship or the coalition forces will undertake all necessary measures and procedures to handle this violation, including the use of force if necessary.”

He said the vessel was headed to the Saudi city of Jazan with medical supplies on board that were used to set up a field hospital on the Yemeni island of Socotra. But Houthi spokesperson Yahya Saree tweeted that the ship had entered Yemen’s waters without permission and was “carrying out hostile activities” when seized by the rebels. The Houthis also published a video they claimed showed military equipment, including assault rifles, on the vessel.

“For weeks, this UAE ship has been under surveillance by our forces and has carried out several hostilities and engaged in hostile activities in Yemeni territorial waters,” Saree said.

The UAE did not immediately comment on the reports.

On Sunday, the United Kingdom’s Royal Navy said it had received reports of an attack on a vessel near Yemen’s Red Sea port of Ras Isa, but it was unclear if the advisory referred to the Emirati-flagged vessel. The navy’s maritime information service said an investigation was underway.

Yemen has been embroiled in chaos since the Iran-backed Houthis overran much of the country, including Sanaa, in 2014 and expelled the internationally recognized government led by President Abed Rabbo Mansour Hadi. A US-backed, Saudi-led military coalition intervened in the conflict in March 2015 to restore the Yemeni government, and the fighting has since created what the UN describes as the world’s worst humanitarian crisis.

The Houthis regularly carry out missile and drone attacks targeting neighboring Saudi Arabia’s airports, military sites and oil infrastructure. The Saudi-led coalition responded with a “large-scale” assault on Dec. 25 after a projectile it blamed on the Houthis killed two people in the southwestern Saudi province of Jizan. Yemeni medics said three people died and six were wounded in the coalition’s retaliatory airstrike northwest of the capital, Sanaa.