A Turkish Sunni woman in her early 40s rises to the top of Kurdish and oppressed people’s political movement. 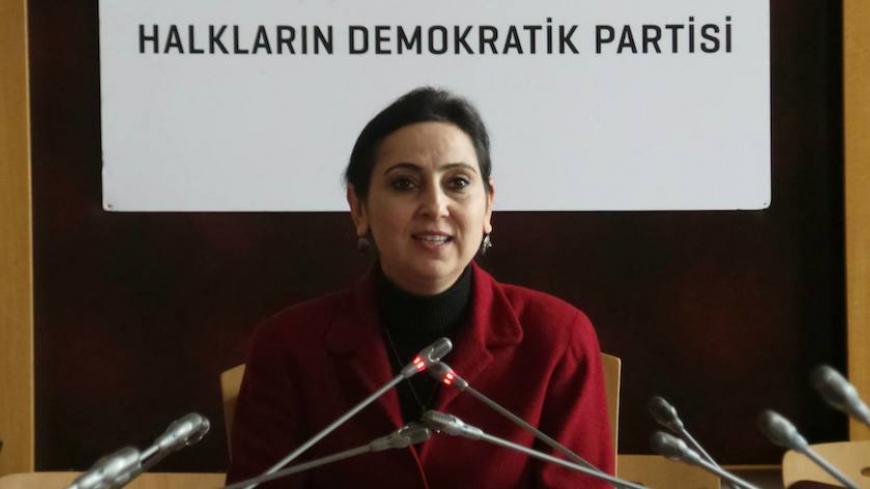 The People’s Democracy Party (HDP) has co-chairs for all representative levels. A female and male official share the responsibility. The party is chaired by Selahattin Demirtas and Figen Yuksekdag. The HDP has become the fastest-growing political movement in Turkey since the August 2014 election. Following the momentum of the last election, Yuksekdag explained, the HDP is now ready to participate in the next general election as a political party, believing it will be able to acquire at least 10% of the national vote, the threshold required to enter parliament. Previously, members of the HDP have entered the parliament as independent candidates.

Yuksekdag is a slender woman with a calm smile even under high levels of stress. She has been active in politics since she was 20. She did not fall into politics by coincidence or family connections, but rather chose politics as a career.

A breath of fresh air, Yuksekdag is polite yet quite stern and precise in her choice of words. She overcomes simple slogans in her speeches without being a bore. She is known not to be conformist. Yuksekdag is the leader of a party that seeks to represent diverse groups, yet is most prominently known as the party of Kurds. Yuksekdag is not Kurdish, although people in Turkey simply assume she is Kurdish or Alevi. Yuksekdag told Al-Monitor that she comes from a Sunni Turkish farming family, proudly carrying the banner for all oppressed people in the Turkish political scene. She was arrested in 2006 and 2009 for her political views. Prior to the establishment of the HDP, she was the co-chair of the Socialist Party of the Oppressed (ESP).

Al-Monitor:  Only a few years ago, Kurdish women had a reputation in Turkey for being the most oppressed. This perception was reinforced by movies and sitcoms portraying the victimhood of Kurdish women. Now, this has been turned on its head both in Turkey and the region. Kurdish women rock in Turkish politics, also in Kobani and Rojava [the Kurdish name for the northern area of Syria (Western Kurdistan)] and have become the face of revolution. How did this happen?

Yuksekdag:  The years I started my political career, hundreds of young Kurdish women went to the mountains [to fight] for national freedom. They were on the forefront of the battles of all towns and cities of Kurdistan. So the Kurdish women’s movement has a special place among women’s liberation process in Turkey. It was meaningful and impressive that in the time when the Kurdish people were suffering under religious pressure as well as feudal culture and financial exploitation, simultaneously thousands of women joined the liberation movement. Women who sacrificed their lives, such as Beritan (Gulnaz Karatas), Zilan (Zeynep Kinaci) and Mizgin (Sema Yuce) became heroic symbols of the movement. They influenced all revolutionary progressive women in Turkey.

As the Kurdish national liberation movement grew, its positive effects on Kurdish women became visible. As hundreds of women became martyrs in the process, it strengthened women’s position in Kurdish society. So the Kurdish women paid substantial dues to earn their rights in a way. They did not succumb to the patriarchal set-up within the revolutionary movement, because the resistance of women was not solely against the abusive state but also against patriarchy, violence, honor killings. Their rebellion was both national and social. We see the remnants of this history in today’s HDP. Women are indeed half of the party, and are equal members with men. This is not a privilege given to women, rather it is HDP’s understanding of how gender equality should be sustained. The developments in Rojava and the resistance in Kobani are the climax of the movement — indeed Rojava is a women’s revolution. Only three years ago, in Rojava, women were suppressed under male dominance. But women entered the public domain with their involvement in the revolution; they changed their destinies. In all leadership posts women and men share the responsibility; female literacy levels are also rising. Women are establishing an army of their own. The YPJ is the Women’s Protection Units, engaged in direct combat. They have become the most secular, enlightened and revolutionary face of Middle Eastern women. Women resist against IS [Islamic State] because they see their sole salvation in fighting. In this way, Kurdish women have become a force to be reckoned with for the whole region.

For the other political parties in Turkey, the Justice and Development Party [AKP], the Republican People’s Party [CHP] and the Nationalist Action Party [MHP] women are mostly utilized as window dressing. In the HDP, women are the active players.

Al-Monitor:  Could we say Rojava along with Syriza in Greece and Podemos in Spain are harbingers of a new leftist movement? Or are these just reactionary movements in the face of increasing racism, and austerity measures?

Yuksekdag:  The Arab Spring starting in Tunisia and Egypt were examples of built-up anger against injustice and dictatorship. Rojava happened in the midst of this spirit, showing it is possible to establish a free people’s democratic movement in this region. Given the crisis of the capitalist system, we see that suppressed people in Europe are also seeking alternatives. That is how Syriza and Podemos emerged. There is no economic collapse in Turkey, but there are potential signs of economic crisis. Poverty rates are on the rise. The AKP’s corruption is also out in the open now, and political rifts in Turkey are too deep. Kurds, Armenians, Alevis, Christians and secular sections of society are all under pressure. The AKP wishes to establish an ultimate Erdogan dictatorship. The HDP appears as a strong alternative for several different oppressed sections of society. In an increasingly connected world, all these social movements influence each other and are connected. The victory of Syriza in neighboring Greece influenced the workers of our country.

Al-Monitor:  And much depends on the success of the peace process. What are your concerns? We have been hearing captured Kurdish leader Abdullah Ocalan has had crucial demands about sustaining the role of women in the process; any insights for our readers?

Yuksekdag:  It is a turning point in the peace process that the Turkish state now openly considers PKK [Kurdistan Workers Party] leader Abdullah Ocalan as a counterpart. We keep communication channels open and the HDP is actively involved in the process. Our most crucial concern is the AKP’s attempts to prolong the process. In the two years of the peace process, the AKP really did not take any meaningful steps, plus continued on their end preparations of war. The AKP has synchronized the peace process to the elections. Their goal again is to sustain the cease-fire until the end of the elections to guarantee a victory. They have failed to deliver on the simplest of mutually agreed items, for instance the release of sick inmates. This rattles the process and disturbs the confidence of the people.

For Ocalan, women’s involvement in politics is crucial, and this is reflected under the “societal demands” section of the 10-item packet that the AKP and the Kurdish delegation agreed. Under the social demands a section guarantees support for women’s liberation movement.

Al-Monitor:  Also, the HDP has been successful in bringing the LGBT community, an outcast group in Turkish political scene, under its umbrella. When were  you first convinced that the HDP could become a party represented in all of Turkey, not just Kurdistan?

Yuksekdag:  The HDP was established as the party of all oppressed and all peoples. All factions find a voice in the HDP. We must accept that the LGBT community is real. We give all groups, including LGBT community members, access on the basis of merit at all levels. So they feel welcome here. It is difficult to bring together sections of society so different from each other, but as the HDP we always believed in a unified movement of the oppressed in these lands. That is why the HDP was established, so our success and effect on society is a result of this unifying power.

Al-Monitor:  Erdogan has asked the public for votes to garner 400 deputies for the AKP in the June elections. That is about 75% of the total national vote. Your co-chair has explained that this is only possible if both the HDP and the MHP remain below the 10% threshold. What is the HDP doing to prevent such a scenario?

Yuksekdag:  Indeed, Erdogan needs 400 deputies to design a new constitution, which will strengthen his dictatorship. Hence the provocation. If there is fighting on the streets, then the public’s trust for us would decrease. We faced similar political gimmicks before. We have constantly repeated that we will not be a party to any sort of fighting; our struggle is against the regime. We are preparing against possible provocations of our political base and are communicating with our counterparts, ultranationalists and Islamist Kurds (Huda-Par). We do have millions of supporters and we owe it to them to beat the AKP’s tricks and win at the ballot box.