More prisoners released in Egypt ahead of national dialogue

A number of political detainees have been released in preparation for the start of a comprehensive dialogue between the government and the opposition. 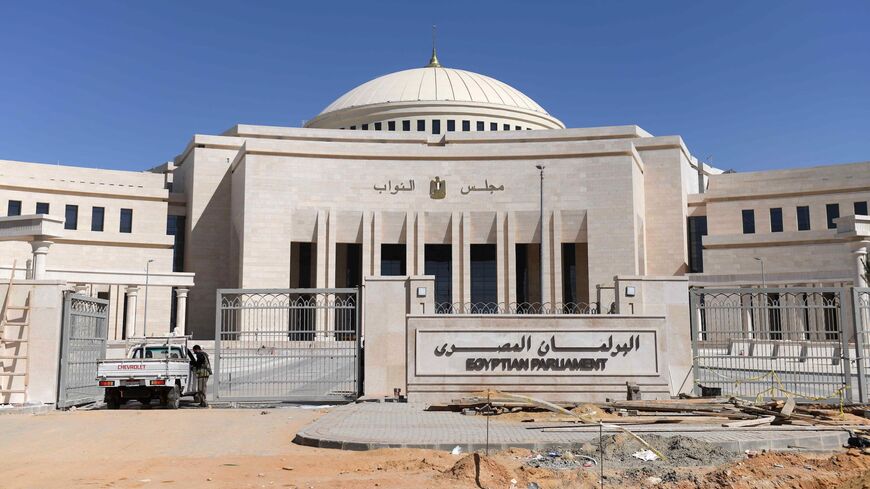 This picture taken on March 7, 2021, shows a view of Egypt's new parliament headquarters, some 45 kilometers east of Cairo. - AHMED HASAN/AFP via Getty Images

CAIRO — Egypt announced in mid-October the release of a new batch of pre-trial detainees as the government prepares to hold a national dialogue with opposition forces called for by President Abdel Fattah al-Sisi in April.

Tarek al-Khouly, a member of the Coordination's Committee of Partie's Youth Leaders and Politicians and of the Presidential Pardon Committee, announced on his Facebook page on Oct. 16 the release of 25 detainees held in pretrial detention for political issues or issues related to freedom of opinion and expression.

On the same day, Mohamed Abdel Aziz, another member of the Presidential Pardon Committee, published the names of those released.

This comes in conjunction with the launch of the preparatory meetings before the start of the actual sessions of the national dialogue between the government and the opposition.

The National Dialogue Board of Trustees, headed by journalist Diaa Rashwan, is discussing during the preparatory meetings the nominations of participants from various parties and public figures in the national dialogue sessions.

The National Training Academy, which was established in 2017 to train government employees and boost their efficiency and is affiliated with the Egyptian presidency, launched the online platform for application forms for those who wish to attend the national dialogue sessions. Anyone can participate in the meeting, upon approval of their application.

Speaking to Al-Monitor, Awadi said that the release of prisoners held in pre-trial detention coincides with the approaching date of the national dialogue sessions, which he said reflects the government’s seriousness in holding a dialogue with all opposition movements, except for the groups calling for violence.

Awadi pointed out that through his work with the Presidential Pardon Committee, he saw clear improvement and a breakthrough in the vision of the current political administration and the security services regarding the issue of detainees and political prisoners.

“This [rapprochement] will serve the community interest and achieve reconciliation between its various political groups. This is the beginning of real political reform in the country,” he said.

He said the sessions are expected to start before the end of 2022 and will result in decisions and procedures that will be implemented at the beginning of 2023.

Tamawi explained that names of participants are currently being discussed during the preparatory meetings, as well as organizational issues to hold the dialogue as per recommendations to deal with the current changes and improve performance in the coming period, especially in light of the economic, political and social situation in Egypt, which will be the main points of discussions in the dialogue.

Ammar Ali Hassan, a professor of political science at Cairo University, told Al-Monitor, “The Egyptian administration is trying to improve its political image, especially amid the difficult economic conditions, by making more efforts to convince the political movements and Egyptians of the seriousness of the national dialogue between the state and the opposition.”

“This is why the Egyptian government was keen on releasing another batch of political prisoners and detainees charged with participating in anti-government protests,” he added.

Civil Society
Courts and the law