There are several questions among Egypt’s political circles following the president’s call for a national dialogue with opposition forces. 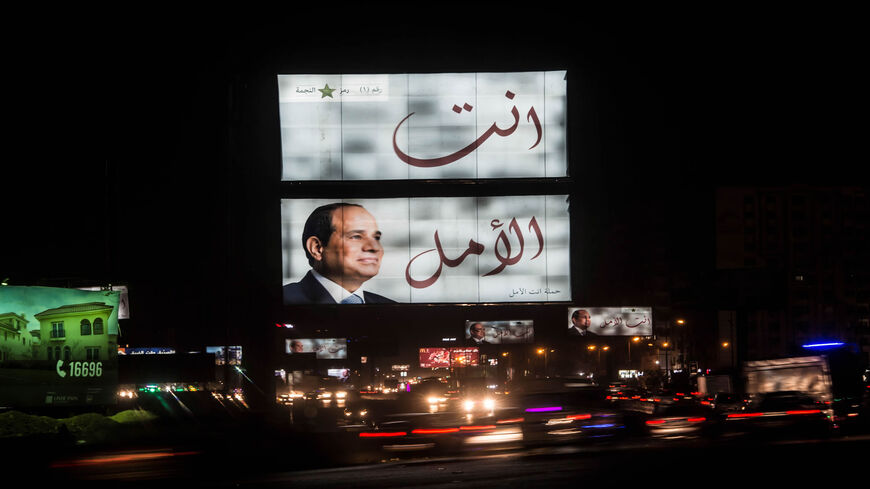 In a speech at the annual Egyptian Family Iftar banquet in Cairo April 26, Sisi said he assigned the National Youth Conference, which operates under the umbrella of the National Training Academy affiliated with the presidency, to organize the political dialogue with all forces, “without exception nor discrimination.”

Sisi promised to attend the final sessions of the dialogue.

The iftar event was attended by Hamdeen Sabahi, a prominent opposition figure and former presidential candidate, and Khaled Daoud, the former head of the Constitution party.

In addition, Sisi called for the reactivation of the so-called Presidential Pardon Committee, tasked with reviewing the conditions of political detainees and assessing their release and whose work has been mostly ineffective since its inception in late 2016.

On May 3, the Presidential Pardon Committee said in a statement that upon Sisi’s directives to reactivate the committee and expand its scope of work, the committee was joined by two opposition figures — Kamal Abu Aita, a former minister and leader of the opposition Karama party, and lawyer Tariq Awadi — among others.

The committee said it will start receiving from several political parties and forces, the National Council for Human Rights and the parliamentary Human Rights Committee names of imprisoned youths seeking to be released, adding that a new amnesty list will be submitted soon.

The committee said it also launched an online application form for the release of those held in pre-trial detention on the National Youth Conference’s website, provided that no judicial ruling had been issued against applicants seeking release.

The National Training Academy, which was established in 2017 to train government employees and boost their efficiency, said in an April 26 press statement that “a number of meetings will be held between leading officials of the various political and youth forces as part of the national dialogue,” without, however, specifying which forces will be attending or the schedule of the proposed dialogue.

These developments came after Kristalina Georgieva, managing director of the International Monetary Fund (IMF), warned that economic conditions in Egypt are worsening.

In an April 21 statement, Georgieva pointed to Egypt’s need for financial stability to be able to carry out reforms and receive an IMF program to protect vulnerable groups.

Daoud, former head of the Constitution party and former prisoner of conscience. told Al-Monitor via phone, “We — as an opposition — were subject to detention and arrest. We took part in the June 30 and July 3 demonstrations and participated in the 2014 elections. We have the right to express our opinion freely without fear of being arrested or imprisoned.”

He said, “Since this positive initiative [national dialogue] was put forward, we will take part in it, in the hope to achieve freedom and demand the release of more prisoners of conscience, more media freedoms, lift the ban on opposition news sites, and allow partisan and political action.”

Commenting on the preparations ahead of the proposed national dialogue, Daoud said that political forces will meet before discussing with the president “the demands and issues that we want to raise as part of the presidential initiative.”

Daoud said, however, there are concerns related to “the initiative for a national dialogue, including the parties that would be invited, how it will be organized and the topics that would be discussed. All this will reveal how serious the call for dialogue is. Our concern is that it would turn out to be a conference attended by hundreds of figures, including dozens of pro-regime people, which would weaken the chances of those who have an opposing opinion to express their own views.”

He added, “The presence of a clear agenda prior to the dialogue would indicate that the dialogue is really serious. So far, the initial signs seem serious compared to past attempts at reaching out at the opposition.”

Speaking to Al-Monitor by phone, Abdel Sanad Yamama, head of the Wafd party, welcomed Sisi’s call for a political dialogue focusing on the priorities of national action.

Yamama also welcomed the reactivation of the Presidential Pardon Committee.

Commenting on his party's preparations for the national dialogue, Yamama said that his party’s youths will submit a working paper on the future of political action to the National Youth Conference’s management, considering that the new generation is “the mainstay of any political movement in Egypt.”

Omar Khairy, professor of political science at Sakarya University, told Al-Monitor, “No political system can change overnight. I believe that serious measures were taken to achieve political reform and expand the public space in Egypt so as to provide an opportunity for political voices and movements to secure political participation and take part in public policymaking.”

He believes the recent release of dozens of prisoners and Sisi’s call for dialogue are indicators of change.

Khairy anticipated that all pro-regime forces, in addition to the Salafist movement that recognizes the regime’s legitimacy and participates in political life, would participate in the proposed national dialogue.

He explained that the civil movement, with its political and human rights wings, would also participate in this dialogue, and would see it as an opportunity, albeit temporary, to have a political presence.

Omar ruled out the participation of the Muslim Brotherhood in the dialogue. He said that the Brotherhood and the opposition abroad exempted themselves from any dialogue with the current regime in Egypt and are waging what they consider a final battle against the regime.

The Muslim Brotherhood, Egypt's largest political opposition group, has so far remained silent regarding Sisi's initiative, which his supporters describe as unconditional.

Commenting on the possibility for a dialogue with the Egytian regime a few days following Sisi’s call, prominent Muslim Brotherhood leader and the group’s former international political foreign emissary Youssef Nada said the Brotherhood is ready to turn the page on the past, after “repaying the injustices.”

In a message posted on the Muslim Brotherhood’s website May 1, Nada said, “Years have passed in our beloved Egypt during which good and evil were mixed, and entire generations got lost, groping between them their way for a brighter future.”

Nada noted that the start would be with “repaying the injustices, halting the aggression and ending the suffering of imprisoned women and men and that of their families” by implementing Article 241 of the Egyptian Constitution.

He told Al-Monitor, “The president needs an image that would wipe out his old image of his one-man rule, because it will have him bear alone the burdens of failure.”