Egypt’s President Abdel Fattah al-Sisi called for a political dialogue with his opponents, but many wonder if the Muslim Brotherhood will be invited to attend. 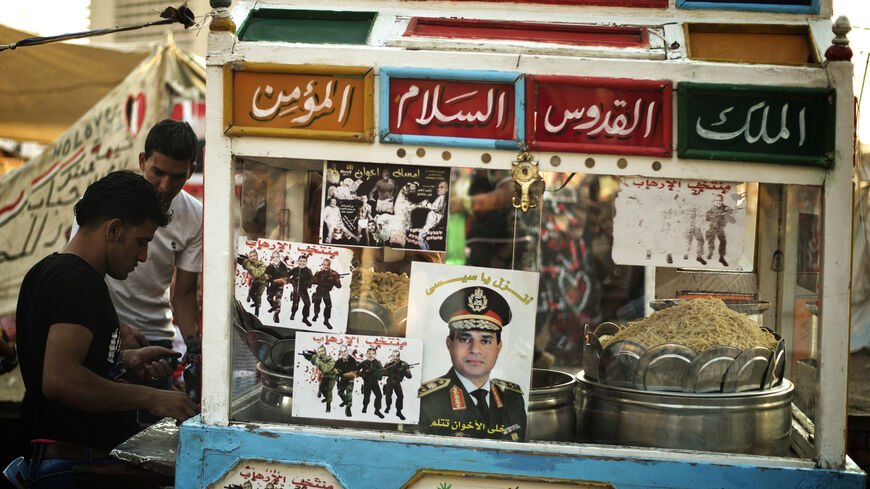 The portrait of Egyptian Defense Minister Abdel Fattah al-Sisi is seen on a street vendors cart in Egypt's landmark Tahrir Square on July 4, 2013. Egypt's Muslim Brotherhood, from which ousted President Mohammed Morsi hails, denounced a new "police state" after the arrest of Islamist leaders and the closure of satellite channels. - GIANLUIGI GUERCIA/AFP via Getty Images

The Muslim Brotherhood has been battling unprecedented internal division and rift since its ouster from the rule of Egypt in July 2013. Ever since, the group has been searching for a foothold that guarantees the security of its members and the continuity of its activities amid the restrictions imposed on it in Egypt, where most of its top-level leaders are in prisons and face conclusive death penalties.

Meanwhile, the Muslim Brotherhood has also been increasingly wary of the noticeable improvement in Egyptian relations with countries that once strongly supported them. Since January, ties between Egypt and Qatar have been steadily improving.

For its part, Turkey is expressing a pressing desire to mend its ties with Egypt as part of its efforts to break its regional isolation. For this purpose, Ankara seems to be inclined to put an end to the support it had once lent to the members of the Muslim Brotherhood and its supporters over the past years.

Qatar and Turkey hosted hundreds of Muslim Brotherhood members and supporters who sought asylum in their territories since the overthrow of former President Mohammed Morsi in Egypt. Ankara was for years seen as the regional hub for the Muslim Brotherhood. Turkey is a host for television channels opposed to Sisi and a haven for most of the Brotherhood's leaders — most of whom are on terrorist lists in Egypt.

Commenting on the possibility for a dialogue with the Egytian government a few days following Sisi’s call, prominent Muslim Brotherhood leader and the group’s former international political foreign emissary Youssef Nada said in statements relayed by media outlets in early May that the Brotherhood is ready to turn the page on the past after “repaying the injustices.”

However, the Muslim Brotherhood's Change Movement — the most hard-line wing within the group — rejected the dialogue with the Egyptian authorities, describing Sisi's call as a “farce.”

Of note, the Change Movement in the Muslim Brotherhood arose in the wake of profound administrative and organizational disputes that engulfed the group following Morsi’s overthrow in 2013. The group’s members were not satisfied with its leaders and some of its positions. Subsequently, the movement formed its own administrative structure, but the mother group has yet to recognize it.

At an event held to mark Eid al-Fitr in Cairo on May 2, Sisi said that the Muslim Brotherhood has repeatedly threatened to target the army forces and sow chaos in the country. He mentioned that the Brotherhood’s Deputy Supreme Guide Khairat el-Shater even threatened him personally when the group ruled the country.

Shater is currently in prison for several cases, including on charges of spying for foreign parties.

Sisi said on the sidelines of an iftar banquet on April 26 that the Muslim Brotherhood directly threatened the Egyptian people and the state during their rule (2012-2013), stressing that the group was not ready back then to run the country.

Sisi served as defense minister during the rule of the Muslim Brotherhood in Egypt. He led the army that ousted Morsi in the wake of popular protests against his rule in 2013 — one year after the group came to power in the first elections in Egypt in the aftermath of the 2011 uprising.

Since then, Sisi has led a massive crackdown on the leaders of the Brotherhood, which Egypt considers a terrorist group, and prosecuted those found to be affiliated with it. Most of the group's senior leaders are currently in Egyptian prisons or have fled the country.

Since the end of 2013, Egypt has classified the Muslim Brotherhood as a terrorist organization, banned its activities, and frozen its assets and the assets of a number of its affiliates. Egypt accuses the group of being behind many terrorist attacks in which police, army and civilians were killed over the past years.

Sisi’s attacks coincided with the broadcast of a television series chronicling the period of the Brotherhood's rule in Egypt and highlighting the country’s suffering and political tension during this period, which eventually led to mass protests that ousted the group after only a year in power.

Season three of the series "Al-Ikhtiyar 3" ("The Choice 3") aired during the month of Ramadan when television viewership rates are high.

The 30-episode series tells the story of Sisi’s role during the Muslim Brotherhood era, up until the ouster of the group and his ascending to power in subsequent elections in 2014.

In his April 27 speech, Sisi praised the actors in the series, saying the series “tells exactly what happened at the time.”

This comes as authorities prepare to launch a national dialogue with opposition forces for the first time since Sisi took power in the summer of 2014. Sisi had made the call during the iftar banquet to hold talks with all political forces “without exception or discrimination.”

No details have been made public so far about the parties to attend the dialogue or its schedule.

However, observers believe that the Egyptian government is seeking, through this dialogue, to build cooperation bridges with the opposition at a time when the country is working to address a devastating economic crisis sparked by the Russia-Ukraine war.

Sisi also urged the participating parties to submit their recommendations to him, promising to attend the final phases of the dialogue.

In an article published in Shorouk newspaper on May 8, Egyptian writer Abdullah al-Sanawi explained that Brotherhood leader Nada's statement — in which he left the door open to the possibility of participating in the dialogue — aimed to test the water to explore whether Sisi's invitation to dialogue could present an opportunity for reintegrating the group into political life.

However, Sanawi ruled out an invitation by the Egyptian authorities to the Brotherhood representatives to the dialogue. “Dialogue between the government and the Brotherhood is not probable, and deals are impossible, he said.

On more than one occasion, Sisi voiced his opposition to the idea of reconciliation with the Muslim Brotherhood or for the group to have any role in the Egyptian political scene during his time in power, stressing that the people of Egypt will not accept their return to political life again.

Meanwhile, some Egyptian parliament members refused to invite the Muslim Brotherhood to any political dialogue. They said that those who have blood on their hands or have been implicated in terrorist crimes cannot be invited to such a national dialogue.

Ammar Ali Hassan, a researcher in political sociology, told Al-Monitor that that the proposed dialogue between the opposition and the authorities should discuss giving the public space for freedom of opinion and expression, releasing political detainees and lifting restrictions on the work of civil society.

Egyptian authorities released on April 24 dozens of detainees, including several prominent authors and activists who had been held in pre-trial detention for years. The move was seen as a goodwill gesture to begin a serious dialogue with the opposition.

In his April 26 speech, Sisi expressed happiness at the prisoners’ release, saying, “The homeland embraces all of us and … differences of opinion do not spoil the homeland’s affairs.” He added that he is keen on reactivating political reform programs, which was not a priority in the past period.

Hassan added, “The current state may have realized that its way of running the country needs to be reconsidered and that internal political action alongside economy and security is a priority and a necessity.”

Human rights groups place the number of prisoners of conscience in Egyptian prisons at tens of thousands. The Egyptian state categorically denies the detention of any person for political reasons.

Sisi’s call for dialogue was widely welcomed by the opposition forces and political parties. Under Sisi's rule, the country has seen a widespread crackdown on dissent with thousands of people imprisoned, mostly Islamists but also secular activists who participated in the 2011 uprising that toppled Mubarak.

Egypt's human rights record and campaigns to suppress dissent and restrict freedom of the press have strained relations between Cairo and Western capitals since Sisi's rise to power.

Hassan Nafea, a political science professor at Cairo University, tweeted on April 29 that the proposed dialogue must include all parties, including the Islamic movement in all its currents, in reference to the Muslim Brotherhood. He said this would be the only way to help Egypt overcome its current crisis.

However, independent observers expect the proposed dialogue to be attended by active key opposition parties and figures, in addition to the leaders of the Salafi movement and its political arm, al-Nour Party, with the exclusion of the participation of the Muslim Brotherhood or any of its figures residing abroad.

But Hassan did not rule out the possibility of inviting the Muslim Brotherhood to attend the dialogue. “Sisi said that the proposed dialogue would not exclude anyone. The ball may be thrown into the Brotherhood's court, especially since the group no longer poses a security threat in the short term,” he added.