The return of an Islamic TV broadcaster who fled after the 2013 coup has raised the question whether reconciliation is possible between the Egyptian government and the Muslim Brotherhood. 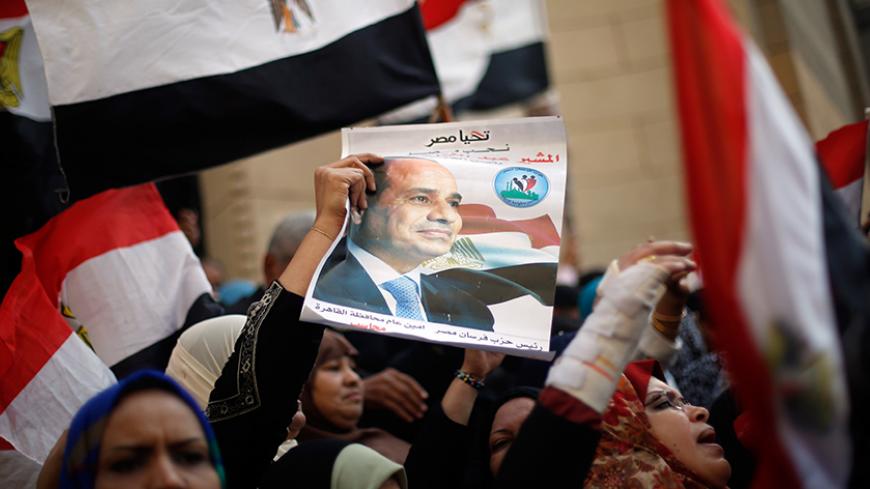 A supporter of Egyptian President Abdel Fattah al-Sisi carries a poster of him as she joins others in shouting slogans against the Muslim Brotherhood in downtown Cairo, Nov. 13, 2014. - REUTERS/Amr Abdallah Dalsh

The return of Egyptian TV broadcaster Tarek Abdel Gaber to Egypt earlier this month has reopened the debate on a reconciliation between the Brotherhood and the ruling regime. Abdel Gaber, who worked for an Islamic-leaning station, had fled to Turkey in the wake of the June 30, 2013, events and after openly declaring his support for the July 2013 sit-in at Rabia al-Adawiya that called for reinstating ousted President Mohammed Morsi. Gaber, who is suffering from cancer, had previously expressed his desire to return to Egypt for treatment but he feared arrest for being associated with a group the state deems a terrorist organization.

President Abdel Fattah al-Sisi, who was the country’s top military leader at the time of Morsi’s ouster, had agreed to develop a new road map for the country that included reconciliation with “all personalities who enjoy credibility and acceptance by all national elites and represent different movements.” The road map was also subject to a number of conditions, most notably that all of its items shall take into consideration preserving the country's security and stability.

Sisi held lengthy meetings March 22 with a group of intellectuals, later dubbed the "Group of 24." Shortly afterward, a number of intellectuals who had not attended the meetings drafted a detailed paper on the proposed procedures in order to bridge the gap between the state’s considerations and the general principles of freedoms and human rights.

People from three groupings — media and young people, human rights and public freedoms, and social justice — have been working to develop mechanisms to deal with and implement the road map related to these groupings.

Egyptian writer Abdullah al-Sinawi, one of the intellectuals who attended the meeting with the president, told Al-Monitor that reconciliation is not currently discussed as an item on the road map and that it is far too early to discuss it. He claimed that the return of Abdel Gaber did not fall under political reconciliation between Sisi and the Muslim Brotherhood.

Sinawi explained that the broadcaster’s return was triggered by purely humanitarian circumstances, since he had been diagnosed with a fatal disease and asked to return to Egypt to die in his own country. However, he said Abdel Gaber’s return is a positive sign for the possible return of other exiled media figures in Turkey who are implicated in other cases.

Sinawi even predicted that Brotherhood members could return to Egypt, even if individually, as long as their situation was similar to that of Abdel Gaber or involved humanitarian concerns.

He said, “There is no objection for the return of Muslim Brotherhood members if they accept constitutional legitimacy. [But this] requires the recognition of all current state institutions and the results for the elections of such institutions, mainly the presidential election and the parliamentary election, the current legislative power in the country. These members must renounce violence and terrorism."

Sinawi, who is known for being close to the presidency and other state institutions, told Al-Monitor that according to the information he received from government sources, “each application filed by a [Muslim Brotherhood member] abroad wanting to return to Egypt will be examined separately by the presidency and not by any other authority.”

Sinawi said that permission to return to Egypt is limited to journalists and politicians who had been deceived by the Muslim Brotherhood, and this decision does not include any of the group's leaders.

Mohammed Abdel Fattah, a member of the Muslim Brotherhood residing abroad, told Al-Monitor, "A reconciliation with the current regime is unlikely to happen.” He said that if there is a real opportunity for reconciliation, the situation would be very complicated, especially with respect to the issue of detainees.

Abdel Fattah said that Egyptian reports about a reconciliation can be categorized as “media shows.”

Brotherhood members, however, still have their eyes on the regime. “The seriousness of the regime’s reconciliation intentions can be tested through [their efforts to reconcile with] the April 6 Youth Movement and release their prisoners,” Abdel Fattah said, adding that if this happens, the likelihood of the Brotherhood dealing with the regime and agreeing on reconciliation may increase.

Al-Monitor also spoke with Yasser Fathi, a Brotherhood member living outside Egypt. Fathi said the current Egyptian state and its institutions “are not constitutional and the Egyptian state is not a state of law as it lacks real legitimate legislative, regulatory and executive institutions.”

Fathi’s opinion, which is similar to that of a broad sector of young Brotherhood members, especially those who were forced to leave the country for fear of arrest, confirms that the road to reconciliation with the current regime has reached a dead end.

Fathi believes that Sisi’s government breaches the constitution and the law and aims to control the country’s capabilities and nationalize the economy and politics in favor of the security and military system.

There is a lack of trust between the two parties to the reconciliation, according to Fathi, who said that any reports about reconciliation are delusional and far from the essence of the problem suffered by the Egyptian people. Such reports, he added, are a mere attempt to escape the current impasse and failure.

Diaa Rashwan, a researcher at Al-Ahram Strategic Center and a specialist in Islamic movements for nearly 30 years, believes that the Muslim Brotherhood is plagued by deep divisions as some members of the group are ready to renounce violence and terrorism and modify their ideas, but the group currently lacks the sufficient courage to announce this.

According to Rashwan, the Muslim Brotherhood’s shift is contrary to the course of many jihadi groups, which embraced extremism in the beginning, then renounced violence and gradually integrated into the community after they committed to the conditions imposed upon them by the state. One case in point is the jihadi groups in Algeria, which started integration in 1997. The Brotherhood’s reverse shift that turned it from a radical group to an extremist one following the dispersion of the Rabia al-Adawiya protest made reconciliation more difficult. “Reconciliation will not occur in the absence of an initiative on the part of those who erred against the state,” Rashwan said.