With Egypt's proposed national dialogue set to open in the coming days, opposition figures are stepping up demands for the release of political detainees. 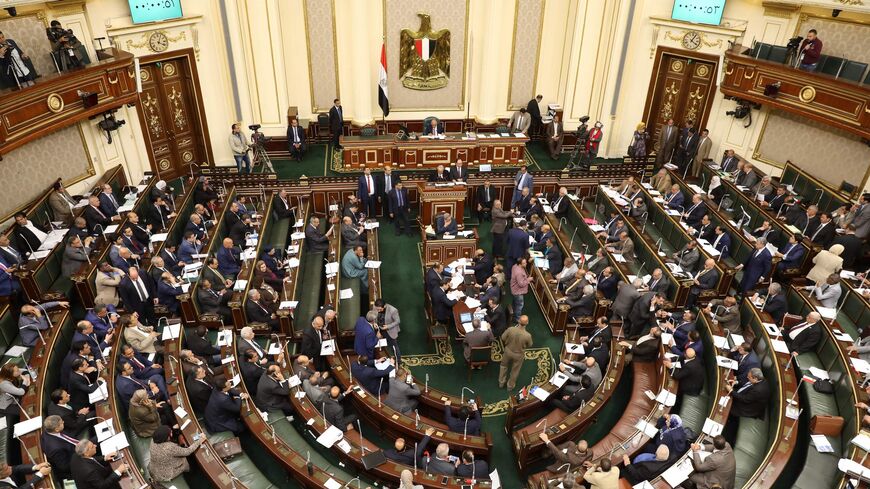 Egypt's members of parliament attend a session in Cairo on April 16, 2019. - AFP via Getty Images

The long-awaited national political dialogue between the government and Egypt's political forces is set for early July — a little over two months after President Abdel Fattah al-Sisi called for a comprehensive societal dialogue to discuss "the priorities for national action."

In statements made during an Iftar banquet in late April that was attended by a number of opposition figures, Sisi also stressed that the dialogue must include all political parties "without discrimination."

In recent days, a 19-member general secretariat, or board of trustees, has been formed to manage the proposed dialogue. The committee has been tasked with setting the agenda and dividing participants into working groups according to their respective specializations. It will also compile a report on the recommendations that emerge from the dialogue sessions, which will then be submitted to Sisi.

Members of the committee include parliamentarians, academics, and journalists appointed after ''consultations" with the participating political parties, trade and labor unions, and government officials, according to Diaa Rashwan, general coordinator of the national dialogue.

Rashwan has been quoted by Ahram Online as saying that invitations have been sent "to hundreds of Egyptians," including those residing outside the country, to engage in the dialogue, which is being organized by the state-affiliated National Training Academy.

To show it is serious in engaging the opposition, the government has invited critics such as George Ishak and Amr Hamzawy to join the dialogue. The former is a member of the liberal Constitution Party and co-founder of the Kefaya Movement, credited with starting the momentum for change that led to the 2011 uprising.

Hamzawy is a senior research scholar at the Center for Democracy, Development and the Rule of Law at Stanford University, and a rights activist who advocates for political reform. He currently lives in the United States and left Egypt more than 10 years ago after he spoke out against "the military takeover of Egypt's nascent democracy" in a 2018 interview published in Jadaliyya. He described Sisi's rule as "an upgraded model of authoritarianism" and decried the forced disappearances and torture of political detainees.

In a significant turnabout, the April 6 youth movement that mobilized for the 2011 mass protests — and whose members have been among the primary targets of the brutal security crackdown on dissent — has also been invited to take part in the discussions.

Still, the dialogue is shrouded in skepticism with some critics dismissing the initiative as "a public relations stunt" to whitewash the authorities' image. Other skeptics have described it as "a ploy to divert attention from the deteriorating economic situation." This, at a time of rising public discontent over soaring prices of basic commodities and fuel.

Members of opposition Islamist movements, meanwhile, have been excluded from the dialogue. In statements published in Ahram Online in early June, Rashwan said that the dialogue was open to all "except those with blood on their hands" or who have committed acts of violence or terrorism — accusations typically leveled at members and sympathizers of the outlawed Muslim Brotherhood.

Sisi's call for a national dialogue has nevertheless been welcomed by the Civil Democratic Movement, a coalition of 35 liberal political parties and public figures whose members see it as "a window of opportunity to express our concerns and get our voices heard," according to Khaled Dawoud, a journalist and former secretary-general of the liberal Constitution Party.

Dawoud told Al-Monitor that the dialogue, aimed at reconciling the government and the opposition, is "long overdue.”

"For the past eight years, the voices of liberal political parties — the Constitution, the Socialist Popular Alliance, Karama, the Bread and Freedom Party, and others — have been missing from the political arena," he said. "They were silenced following the detention of a significant number of their members for their political and ideological views; it is high time to allow the liberal parties to engage politically."

Dawoud, who was himself arrested in September 2019 and spent seven months in pretrial detention on charges of aiding a terrorist group and spreading false news, sees the formation of a general secretariat as "a positive development" and hopes that the planned dialogue will usher in a new chapter of greater freedoms for the country. Still, he expressed concern about "stretching the dialogue too thin" by trying to tackle too many issues at the same time. "This can only undermine the dialogue," he cautioned.

"For the Civil Democratic Movement, the economic challenges faced by the country are a priority issue: the increasing foreign debt, the price hikes of fuel and basic commodities, and inflation are issues that concern all citizens," Dawoud said.

He continued, "Equally important is the political file amendments to the law on pretrial detentions, the diminishing space for free expression, and, of course, the release of political detainees."

While there has been a marked shift toward a political opening since Sisi called for the national dialogue — the presidential pardon committee has been reactivated and dozens of political detainees who were in custody pending trial have been granted amnesty in recent months — thousands of prisoners remain behind bars for their ideological views or for exercising their right to freedom of speech and/or assembly. They face charges of belonging or aiding a terrorist group and/or spreading false news — accusations that international rights groups such as Human Rights Watch have described as "politically motivated."

"Releasing all political detainees is a key demand of the Civil Democratic Front and an important first step that would show the authorities' genuine intent to engage in constructive and inclusive dialogue," Talaat Fahmi, secretary-general of the Socialist Popular Alliance told Al-Monitor.

Like Dawoud, Fahmi is optimistic about the outcome of the dialogue and  believes that "things are moving in the right direction." He noted, "The appointment of a Secretary-General to chair the Board of Trustees in the next few days will pave the way for the launch of the dialogue."

In a tweet published June 27, politician Amr Moussa stated that "the national dialogue called for by President Sisi constitutes a significant step toward the establishment of the New Republic, civil and constitutional … the call gives every Egyptian hope for a better life for our children and grandchildren."

Moussa was referring to Sisi's July 2021 announcement at a Cairo stadium about the establishment of "a new republic."

Dialogue and reconciliation are indeed important steps toward building the aspired new republic — one that would presumably be governed by freedom, democratic principles and dignity. But reconciliation is a process that needs forgiveness and healing. More importantly, it needs political will, tolerance and determination. It remains to be seen whether the dialogue will endure the test of time.