Five months after its announcement, the national dialogue between the government and the opposition in Egypt is set to start in the coming weeks. 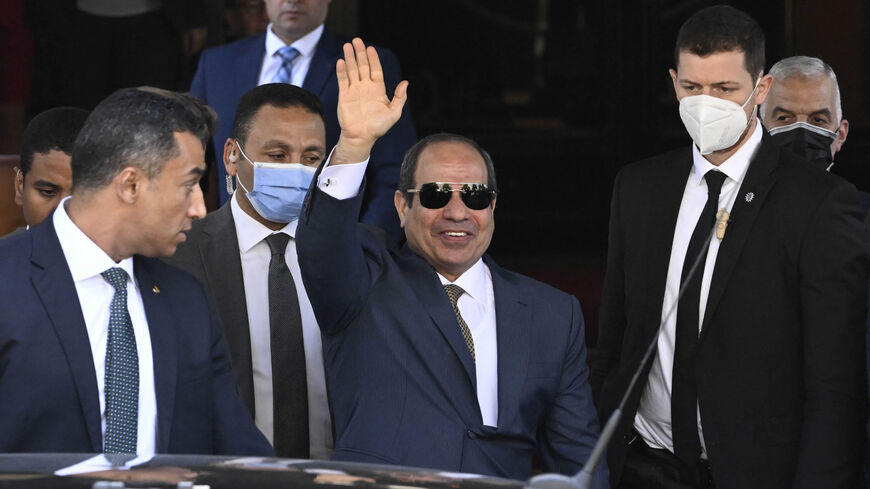 Egyptian President Abdel Fattah al-Sisi waves as he gets out of his hotel in Berlin to leave Germany, after attending the 13th Petersberg Climate Dialogue meeting, July 19, 2022. - John Macdougall/AFP via Getty Images

CAIRO — Preparations to hold Egypt’s national political dialogue, which President Abdel Fattah al-Sisi proposed in April, is in its final stages after the board of trustees of the national dialogue announced Sept. 11 the selection of the rapporteurs for its three main tracks and the 15 subcommittees to be discussed during the dialogue’s sessions.

Two prominent members of the board of trustees told Al-Monitor that they expected the official dialogue sessions to be launched at the beginning of October.

In April, Sisi surprised Egyptian political circles by announcing the launch of a political dialogue with the opposition forces to discuss the national action to confront the domestic challenges, adding that the discussion’s outcome will be reported to him directly.

The preparations for the dialogue have been ongoing since then.

On June 26, the Egyptian presidency formed the so-called National Dialogue Board of Trustees, which is made up of 19 members, including political figures representing both the government and the opposition.

Since its inception, the board of trustees has held four meetings, during which it laid the foundations and mechanisms of the national dialogue, and identified three political, social and economic tracks to be discussed during the dialogue, with 15 subcommittees.

The board also collected more than 15,000 propositions from political forces, parties and citizens, and received more than 96,000 requests to participate in the dialogue. It also announced during its Sept. 11 meeting the end of the preparation stage and moving toward holding multiple sessions bringing together the forces representing the Egyptian people across the political spectrum.

Kamel Zayed, member of the National Dialogue Board of Trustees representing the pro-opposition Civil Democratic Movement, told Al-Monitor, “We are working to start the actual dialogue sessions in early October, after taking care of some organizational issues.”

Mahmoud Fawzy, head of the Technical Secretariat of the National Dialogue, said the dialogue sessions will be held at the headquarters of the National Training Academy, which is currently tasked with managing the national dialogue.

In televised statements Sept. 6, Fawzy said that a comprehensive report will be prepared on the dialogue outcome to be submitted directly to Sisi, explaining that the president will have the final say on the priority of national action to be implemented.

With the actual holding of the national dialogue fast approaching, the Civil Democratic Movement parties have stepped up their pressure on the government, accusing it of failing to meet the opposition’s conditions to participate in the dialogue, namely the release of political detainees in prisons.

In a statement published on its Facebook page Sept. 7, the movement confirmed “its categorical rejection of the continued arrest of citizens for expressing their opinions, and the restrictions imposed on the public sphere and the media, which contradicts with official claims about moving toward real political reform.”

The movement also rejected the “authorities’ rush to take economic and political measures of strategic nature that affect citizens’ livelihoods and increase the burden of foreign debt and inflation, before the start of the dialogue.”

Zayed, who is also a leader in the Karama (Dignity) party, said, “We called for guarantees for the success of this dialogue, and we stressed that all prisoners of conscience should be released. But things have not greatly changed.”

“Some of the prisoners were released at the time the national dialogue was announced, but it is not enough for us, and we hope the authorities will take the appropriate measures,” he added.

Amr Hashem Rabie, another member of the National Dialogue Board of Trustees, seemed to concur. He told Al-Monitor, “It is not the national dialogue that is progressing slowly, but rather the measures to release those arrested and sentenced.”

In an attempt to contain the opposition, the government announced Sept. 9 the release of a new batch of 33 young men and women who were being held in pretrial detention pending political cases.

Rabie said that social and economic pressures prompted the officials in charge of organizing the national dialogue to speed up the launch of the sessions.

“I think the actual sessions will start in two weeks or 20 days,” Rabie said. “But the success of the national dialogue depends on the government’s seriousness in committing to the dialogue outcomes and recommendations.”

The chairman of the National Dialogue Board of Trustees, Diaa Rashwan, rejected any statements questioning the seriousness and feasibility of the dialogue.

During his “Heliopolis” TV program broadcast on the ETC channel Sept. 2, Rashwan, who is also a journalist, warned that “any attempt to distort this initiative [the national dialogue] will be doomed to failure.”

Meanwhile, Zayed said that is why “the opposition does not want to close the door on dialogue with the government. At the same time it hopes that the state will seriously commit to implementing the dialogue’s recommendations.”

Egypt has suffered greatly in the wake of the Russian war on Ukraine, with the country’s external debt rising to about $157.8 billion at the end of March, according to central bank data released in July. Inflation also rose to a four-year high, driven by an increase in food and beverage prices.

Sisi’s speech Sept. 8 during the inauguration ceremony of the new locally manufactured naval units of the Suez Canal Authority reflected the gravity of the economic crisis and pressure on the country.

He called on Egyptians to support his government and not be discouraged.

The president also assigned his government to hold an economic conference to help solve the crisis.

Amy W. Hawthorne, research director at the Project on Middle East Democracy, told Al-Monitor, “Looking at the political environment in which Sisi announced the dialogue — the first time he has called for such a gathering — I would speculate that the severe economic crisis and the government’s desire to improve its image in advance of the COP27 climate conference were key factors in leading to the national dialogue.”

"[After five months since the invitation] I do not see major changes in the political environment overall. Yes, a number of prisoners of conscience have been released, and some opposition figures have been allowed to appear in the media. But political arrests continue, human rights abuses continue, thousands remain in prison,” she noted.

Hawthorne concluded, “I doubt that opposition parties will be able to push for major political concessions. Yet if the dialogue helps to ease repression a little bit and open up public space a bit to other voices, that is a good thing."