Egyptian authorities and political parties are putting the final touches on a national dialogue scheduled for early July, despite criticism from some opposition groups. 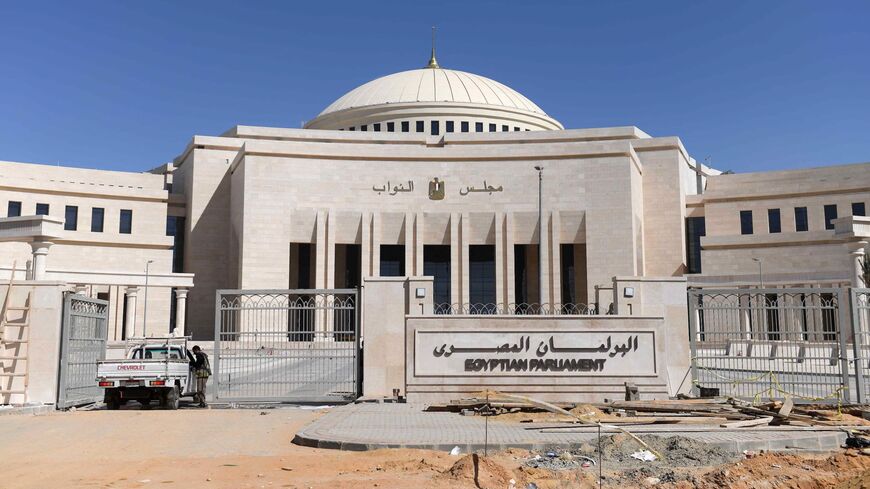 This picture taken on March 7, 2021, shows a view of Egypt's new parliament headquarters being built at the New Administrative Capital megaproject, some 45 kilometers east of Cairo. - AHMED HASAN/AFP via Getty Images

CAIRO — Egyptian authorities and political parties and forces are putting the final touches on the national dialogue scheduled for early July.

Egyptian President Abdel Fattah al-Sisi in late April had called for a comprehensive national political dialogue bringing together all party and youth currents, without exception, with the aim of confronting the current challenges facing the country.

Sisi asked that the dialogue results be submitted to him personally.

On June 8, the recently formed National Dialogue Department, which is tasked with preparing for the upcoming dialogue, announced the selection of the head of the Journalists Syndicate and head of the government's State Information Service, Diaa Rashwan, as the national dialogue’s general coordinator.

In a statement carried by Egypt's official MENA news agency, the department also announced the selection of the government's secretary-general of the Supreme Council for Media Regulation, Mahmoud Fawzy, as head of the national dialogue’s Technical Secretariat, according to MENA.

In its statement, the National Dialogue Department explained that the tasks of national dialogue general coordinator Rashwan “consist of starting consultations with political and union forces and all parties participating in the national dialogue in a bid to form the National Dialogue Board of Trustees, made up of 15 members representing all parties, public figures and experts to ensure effective participation and reach results in accordance with different national visions while serving the interests of Egyptian citizens.”

The statement added that all the necessary preparations and logistics for the dialogue were completed through the National Training Academy, whose role is limited to organizational and logistical tasks.

In a statement issued on June 10, the Civil Democratic Movement said that the leaders of the seven parties (Al-Karama [Dignity] Party, the Socialist Popular Alliance Party, the Conservative Party, the Constitution Party, the National Conciliation Party, the Socialist Party of Egypt, and the Bread and Freedom Party) met on June 9 “and unanimously agreed to reject the statement issued by the National Dialogue Department for putting forth a unilateral approach that only partly complies with what was agreed upon during the consultation sessions held over the course of the past month.”

Meanwhile, Sayed Abdel-Aal, head of the National Progressive Unionist Party in Egypt, told Al-Monitor over the phone that the appointment of Rashwan as the national dialogue’s general coordinator was a “good and balanced” step.

Abdel-Aal added that “Diaa Rashwan and Mahmoud Fawzy are known for their integrity and impartiality, and they are both capable of playing their roles in coordinating between parties and political forces for the sake of the national dialogue.”

He pointed out that “the main goal of the national dialogue is to start consultations between the ruling authority and the political forces to grease the Egyptian economic wheels and turn the country into a modern democratic civil state.”

A number of political parties — including the Nation’s Future Party, which holds the majority in parliament, the Egyptian Social Democratic Party and Egypt’s oldest party, Al-Wafd — submitted to the National Training Academy (the body responsible for managing the national dialogue) their vision to include several economic and political issues in the national dialogue.

Meanwhile, some Egyptian politicians have expressed reservations about the National Training Academy taking over the management of the national dialogue, claiming it is an impartial party, among other reasons — and some of them even suggested that the Senate (the upper house of parliament) manage this dialogue.

In what seems to be a response to such reservations, the National Dialogue Department said in its June 8 statement, “The National Training Academy continues to adopt a neutral and impartial approach within the framework of its organizational, technical and coordinating role, away from interfering in the content of the effective national dialogue.”

For his part, member of the Senate and former head of Al-Ahram Center for Political and Strategic Studies Abdel Moneim Said told Al-Monitor, “The National Training Academy’s management of the national dialogue is a kind of logistical measure aimed at facilitating such meetings attended by hundreds of people.”

He explained that “the appointment of the general coordinator of the national dialogue and the head of the Technical Secretariat is proof that this dialogue is serious and has started to take practical steps on the ground.”

He said that “choosing Diaa Rashwan as the coordinator of this dialogue is a good step, as Rashwan has good ties with all political forces, be they part of the authorities or the opposition. Although he is the head of the State Information Service, he is primarily a political figure and has many achievements in public work. He is a researcher in political affairs, and this makes it easier for him to communicate with political parties and forces, collect their proposals and set priorities for dialogue.”

Rashwan said during a TV program on the ETC channel on June 10 that 386 proposals were received regarding the national dialogue since its announcement, including both political and economic proposals.

Tarek Fahmy, a professor of political science at Cairo University, told Al-Monitor, “There are several conditions that must be met in order for the national dialogue to reap its fruits. Chief among these is that the matter be taken seriously, as evidenced by the Egyptian government’s direction to announce a dialogue timeline. This has also been evidenced by the fact that there are political forces that already put forth their visions on the issues that will be raised during the dialogue. There should also be a collective vision and not separate visions, and the different ideas and opinions should be compiled into a map upon which the next steps shall be taken, through prominent political and social forces.”

According to Fahmy, what is also needed is “the participation of all political forces, with the exception of the Muslim Brotherhood, which is legally prohibited in Egypt as its members are proven to have committed acts of violence — but with the inclusion of some figures affiliated with Islamic currents, such as Al-Nour Party.”

Fahmy added that “the national dialogue will eventually take place, and it is important that there be executive mechanisms for it to run smoothly. Also, it is important that the dialogue not be limited to the presidential pardon for political prisoners. Although this issue builds bridges of trust between the regime and the opposition, the dialogue should address issues of concern to the entire country, be they related to politics, economics or social affairs.”