Israeli Prime Minister Naftali Bennett and Turkish President Recep Tayyip Erdogan seem to be competing for a mediator role between Russia and Ukraine, but are they? 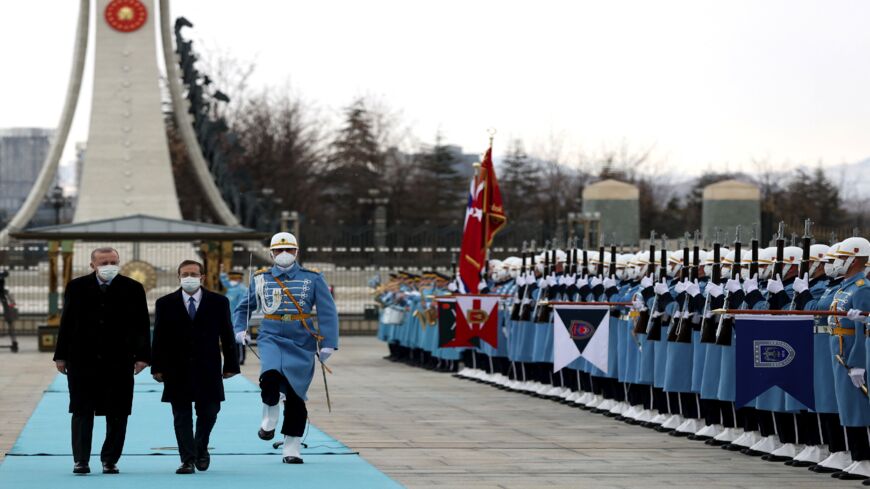 Jerusalem has been cautious these past few days over Israel's mediation efforts between Russian President Vladimir Putin and his Ukrainian counterpart, Volodymyr Zelenskyy, first reported just two weeks ago. Celebrated by associates of Prime Minister Naftali Bennett at the beginning, they now try keeping a low profile on the issue.

True, Bennett continues to juggle lengthy phone calls with the two leaders, and the Financial Times reported this week that Bennett “has been the primary international mediator on the talks.” Still, officials in Jerusalem are silent. “We did not brief the Financial Times,” one close Bennett aide told Al-Monitor on condition of anonymity. “The report came from their correspondent in Europe and we have no reaction to it.” Meanwhile, reports persist of a Russian proposal — the gist of which was published here over a week ago — to Ukraine and progress in their negotiations. Israel is not optimistic at this stage and Bennett’s people are trying to downplay his role, perhaps fearing an expected failure that could tarnish his reputation, or as part of Israel’s stated “measured policy” toward both sides since the start of the war.

Even as Israel tries to downplay its part, Turkey’s mediating role and that of its President Recep Tayyip Erdogan is growing, with offers extended to the two warring leaders to meet in Ankara or Istanbul. Bennett, who brought up the idea of such a summit in Jerusalem prior to the Russian invasion, is no longer keen. The Ukrainians, who expressed willingness for a Jerusalem meeting, are encountering evasive Israeli answers. For now, Turkey is in and Jerusalem is out.

Less than a year ago, such mediation offers would likely have set off a race between Jerusalem and Ankara for the lead role. These days, according to some reports, Jerusalem and Ankara are even believed to be coordinating their moves. This reversal stems from the major detente in their relationship since last summer, which peaked with the visit March 9 by President Isaac Herzog to Ankara and Istanbul. Erdogan pulled out all the stops in welcoming Herzog, publicly abandoning the comfort zone from which he used Israel as a punching bag whenever the need arose to firm up his political base. Judging by his statements, he is focusing, instead, on his country’s strategic geopolitical interests in light of major regional and international developments. In this arena, Ankara’s positions are far closer to Jerusalem these days than they are to many other capitals.

Herzog returned from his Turkish ice-breaking mission well pleased. He was received with the trappings and pomp reserved for those Turkey seeks to impress, including full-regalia military honor guards, a 21-gun salute and an orchestral rendition of Israel’s anthem, Hatikva. Seeing an Islamist leader affiliated with Hamas standing at attention to the sounds of the Jewish state’s anthem in his front yard was the ultimate victory photo for Herzog after more than a decade of enmity and alienation between the two countries.

Nonetheless, Herzog is a realist, and while Israel’s top diplomatic echelons are taking a more sober view of these developments, they are wholly willing to give them a chance. “We know that the kind of strategic alliance we had with Turkey is not in the cards right now. We realize Erdogan’s limitations and know he has not fallen in love with us nor been converted to Zionism. He is simply demonstrating pragmatic leadership. Our many shared interests reached a critical mass that led Erdogan to shift direction. This is what he did and we are going along,” one of Israel’s top diplomatic sources told Al-Monitor on condition of anonymity.

Another Israeli diplomatic official put it this way. “When such a large window of opportunity opens up, you do not slam it shut. Turkey is a power, one of three non-Arab powers that dictate the pace of events in the Middle East, along with Iran and Israel,” he said, speaking on condition of anonymity. “The alliance between these states is no more. Iran is a bitter enemy that makes no secret of its desire to annihilate Israel. Turkey is simply not on the same page.” The official noted that Turkey has a population of some 90 million and that even during the coronavirus pandemic, when global trade declined, the volume of bilateral Israeli-Turkish trade was one of the few to record an increase, reaching almost $8 billion and making the two countries strategic trade partners. “This cannot be ignored and we are happy to see that Erdogan recognizes this as well,” the official said.

But Erdogan’s intentions have not yet been put to the test of a major Israeli-Palestinian clash, the likes of which prompted angry rhetoric and anti-Israel measures in the past, and both capitals hope this can be avoided even during the upcoming month of Ramadan. The holy Muslim month beginning April 2 coincides this year with the Jewish Passover holiday (starting mid-April), a coincidence of timing that has rarely augured good news in the past. An Israeli-Palestinian flareup during these two holy calendar dates could potentially occur at one or two of the traditional hotspots that Erdogan holds dear: Jerusalem’s Al-Aqsa Mosque and/or the Gaza Strip.

With that in mind, Erdogan and Herzog declared after their meeting that a special team would be formed to iron out differences and deal with crises and conflicts directly by both capitals. The Israeli team will be headed by the respected Director General of the Foreign Ministry Alon Ushpiz. The Turkish team will be led by one of Erdogan’s closest advisers, Ibrahim Kalin. “I don’t know whether we can overcome the next crisis nor when it might occur,” the second Israeli diplomatic official noted. “I do know that this time, at least, both sides are very interested in a peaceful outcome.”

Israel is trying at the same time to reassure its other regional allies. Before heading to Ankara, Herzog conducted official visits to Greece and Cyprus. His aides say both countries gave their blessing for the rapprochement with Turkey.

The large deposits of natural gas found in Israel’s territorial waters, while a clear boon, are also a highly sensitive issue in Israel’s regional relationships. “Erdogan wants Israeli gas, as much and as quickly as possible,” the diplomatic official said. The proposed EastMed gas pipeline from Israel through Cyprus and Greece to Europe has been shelved, in part due to US reservations about the ambitious project. “The Americans would rather see the gas passing through Turkey,” the official noted.

Plans are also afoot to pump Israeli gas to Europe through Egypt. “This is a complex dance we are trying to perform between various options and gas pipelines,” a senior Israeli economic source conceded, speaking on condition of anonymity. “Our strategic principle is to avoid putting all our eggs in one basket, i.e., avoid pumping all the gas through one pipeline in a volatile area such as ours.” What can be inferred from this comment to Al-Monitor? That Israel would be happy to have some of its natural gas flowing to Europe through Turkey to the north, and some through Egypt to its west. This pleasing vision is still far off. For now, let's see how we get through Ramadan.