Israel seems determined to focus on the opportunities that could stem from the Afghan crisis, such as a wake-up call to its American allies. 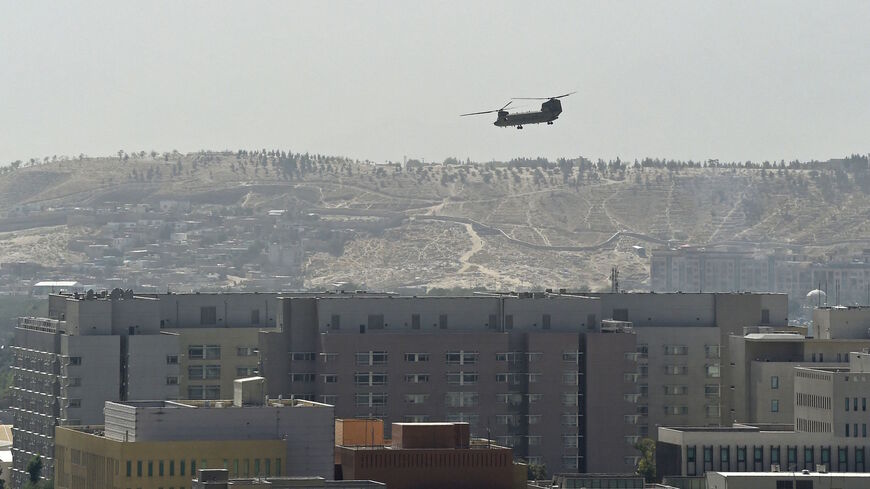 A US Chinook military helicopter flies above the US Embassy in Kabul on Aug. 15, 2021. - WAKIL KOHSAR/AFP via Getty Images

Israeli intelligence had long given up on Afghanistan. When President Donald Trump declared that US troops would withdraw by May 2021, no one in Israel entertained hopes of a change in policy under a Democratic administration. When President Joe Biden announced a final US pullout from the war-torn country, assessments differed on how long it would take the Taliban to crush the modern Afghan state envisioned by the United States and its allies. “It will not take three months and not even one month,” a senior Israeli security source told Al-Monitor several weeks ago on condition of anonymity. “It will happen much faster.” But even he probably did not believe that it could take the Taliban only hours to take over Afghanistan.

Israel has experience with such situations. The departure of its troops from Lebanon in May 2000 was planned as an orderly pullout over several days. It turned into a rushed flight of Israeli forces as the Israeli-supported South Lebanon Army, armed and trained by the United States like the Afghan military, fell apart within hours on live television, making way for the Islamist Hezbollah movement to seize control. A similar situation occurred in Gaza some 15 years ago, with Hamas overtaking the Strip, routing the far bigger and better armed Fatah force of Mohammed Dahlan that had controlled the enclave since the Oslo Accords. “One should not count heads or rifle barrels,” the late Israeli Prime Minister Ariel Sharon said at the time. “What counts is willingness to die for a cause. The Hamasniks are determined, Dahlan’s people are not. That’s the story in a nutshell.”

Israel's intelligence agencies clearly envisioned a Judgment Day scenario in terms of US deterrence in the Middle East in general and Iran in particular. But other voices are also emerging in Israel.

“It’s possible to leverage events there in our favor,” a former senior Israeli intelligence source told Al-Monitor on condition of anonymity. “I think that the shock experienced by Biden and his people, the harsh public reaction in the US and in the international media could have the opposite effect now, similar to a pendulum effect. The humiliating surrender to the Taliban could actually lead Biden to toughen up and decide to flex US muscle toward Iran, given the threat it poses to world peace and not just to the lives of local citizens.”

Israel would rather stay focused on the opportunities that could stem from the Afghan crisis. “There’s an opportunity here, too,” a senior diplomatic source in Jerusalem told Al-Monitor on condition of anonymity. “First of all, it seems to me that these events illustrate to Israel’s allies in the Middle East that only one significant force remains in the world stable and determined enough to stand up to Iran without blinking. That force is Israel.”

The diplomatic source added that as Prime Minister Naftali Bennett heads for his first White House visit later this month, he “must convince Biden that the US, as leader of the free world, cannot afford a series of pullouts and defeats in the Middle East.” Bennett is expected to tell the president that giving in to Iran after folding in Afghanistan could set off a disastrous chain reaction with deleterious effects for generations to come.

“It should be stressed,” the source said, “that Israel does not and cannot have any complaints against the Americans for departing Afghanistan. It is neither fair nor moral to demand that the American taxpayer continue to fund a struggle for the freedom of the Afghan people, and it is the president’s right to put a stop to the bloodletting in this sinkhole.” Bennett’s task will be to convince Biden that Iran is not Afghanistan: It poses a tangible and significant threat to the entire world, and the United States is not being asked at any stage to invade Iran or launch all-out war against it.

“The Americans are the only ones with a credible, significant military option that does not involve boots on the ground, to destroy or at least severely damage Iran’s nuclear infrastructure,” said the diplomatic source. “Putting that option firmly and seriously on the table, and displaying determination to deploy it, is the only way to break though the dead end reached in efforts to block Iran’s nuclear program.”

Bennett is now preparing for this mission, although a final date for his sit-down with Biden has yet to be finalized. At the same time, Israeli intelligence is examining the stunning intelligence failure in assessing Afghanistan’s resilience in the face of the Taliban onslaught. “There are undoubtedly things that intelligence cannot measure, detect or identify,” a former Israeli intelligence source told Al-Monitor on condition of anonymity. “One can measure power, weapons, number of fighters, tanks and planes. It’s harder to measure determination, staying power and willpower. Many intelligence assessments have come crashing down in the face of a deceptive reality. We must study the Afghan case so that we can prevent a similar intelligence failure here. Unlike the US, Israel cannot afford mistakes of this magnitude.”