In Washington, Gantz all about US snapback sanctions on Iran

Israel’s Defense Minister Benny Gantz is in Washington today busily encouraging the administration to move ahead with its snapback sanctions move. 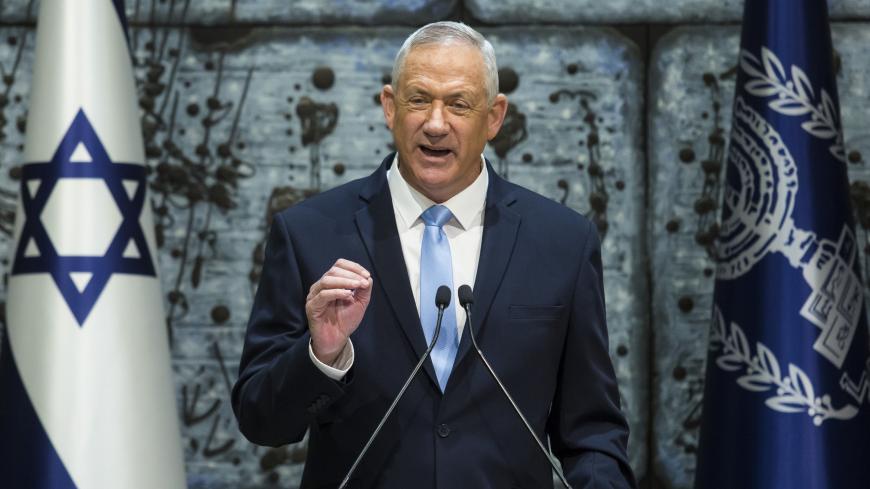 Despite the many pressing security issues at hand, Defense Minister Benny Gantz’ lightning US visit this week is intended primarily to “mark territory” in Israel's internal politics, as one of his associates puts it.

The status of Israeli leaders is determined to some extent in Washington. For Israeli defense ministers and prime ministers, the US capital is a necessary and particularly photogenic component in branding their leadership. Gantz’ tight schedule follows a familiar pattern, including a sit-down with his US counterpart Mark Esper.

Prior to his departure, his aides were still trying to gauge the possibility of an “impromptu meeting” with President Donald Trump during Gantz’ scheduled session with national security adviser Robert O’Brien, as well as a brief get-together with Secretary of State Mike Pompeo. Previous American presidents who sought to favor Israeli leaders would occasionally drop by during their meetings with national security advisers. Given Trump’s hectic schedule at the height of his reelection campaign, he's not likely to make time for such an encounter.

Gantz’ talks in Washington will focus on the “snapback” option, this week’s dramatic US move to reimpose sanctions on Iran for violating its nuclear agreement with world powers. The controversial move is presumably the final phase of the tremendous American effort to cement an alliance between Israel and the Sunni Gulf States in light of Iran’s expected resumption of major conventional arms deals, mostly with Russia and China, now that the sanctions are about to expire.

“The Gulf is terrified by this possibility,” a senior Israeli security official told Al-Monitor on condition of anonymity. “The fact that Iran will now be able to renew its conventional arsenals, buy missile cutters, fighter jets, rockets, missiles and other weapons in order to ramp up its pressure on the states of the region is causing sleepless nights for many in the region.”

The United States presumably pledged to the states that agreed to bring their covert relationships with Israel into the open that it would do all it could to reconstitute the international sanctions imposed on Iran 13 years ago that are due to expire on Oct. 18. Israel, obviously, supports the snapback option, which most UN Security Council members, especially Russia and China, reject as invalid considering the 2018 US pullout from the nuclear deal. “The Americans are doing this mostly because they are the only ones who can,” the senior Israeli security source told Al-Monitor, “But it is essential in order to prevent Iran’s further conventional re-armament.”

Nonetheless, the Israeli administration clearly assumes that the Iranians are gearing up for negotiations with the United States on a new nuclear agreement. “They are preparing for this possibility both in case Joe Biden wins, and in case of the opposite, a Trump victory,” a former top military official told Al-Monitor on condition of anonymity. “They realize that the current situation is untenable. They prefer a Biden victory, in which case they would seek to revamp the previous agreement, but either way, it is pretty clear negotiations will occur.”

On the face of it, Israel would rather see Trump continuing to conduct policy on Iran. Nonetheless, no Israeli, not even the heads of the various intelligence agencies, can forecast the outcome of talks between Trump and the Iranians. The American president loves his “dealmaker” image, now embellished by his peacemaker branding and bid for the Nobel Peace Prize. Trump may well be willing to consider far-reaching concessions in future negotiations with Iran as he continues to wage the ambitious campaign he launched in recent weeks. Israel does not hold out high hopes for Trump deploying military force to destroy Iran’s nuclear infrastructure. While some in Prime Minister Benjamin Netanyahu’s circle continue to believe in such an option, most associates of Gantz and Foreign Minister Gabi Ashkenazi do not.

In any case, there is across-the-board agreement in Israel on the need to forestall Iran’s conventional re-armament. “It is inconceivable that Iran will now be rewarded for its behavior and for consistently violating the nuclear agreement,” a top Israeli defense source said on condition of anonymity regarding recent news reports that Iran will have sufficient fissile material by year’s end for a nuclear bomb. “The Americans are very determined on this issue and they have announced that anyone who does not cooperate in following the US and restoring sanctions would be deprived of access to the US market and risk sanctions,” the source said. “While it is unclear what influence this will have, we now have a dramatic, sane and logical last-minute measure to counter attempts to undermine the fragile stability in the Middle East.”

Israel is counting on the Europeans to cooperate “at the last minute” with the snapback move. “We are talking mostly about Germany and the UK, which understand the absurdity of lifting the embargo on Iran at this point,” a senior Israeli defense official told Al-Monitor on condition of anonymity. “The French are the recalcitrant ones … and we are not counting on them.” Israel is monitoring closely the US-European contacts on this issue and is well aware of Pompeo’s uncompromising position as expressed to his European counterparts a few weeks ago, when he warned that failure to join the US effort would be tantamount to treason.

In his Washington talks this week, Gantz will also discuss ways to preserve Israel’s qualitative military edge in the Middle Eastern arms race in the wake of the declared American intention to sell F-35 stealth fighters to the United Arab Emirates. “The arms deals that the US will sign with Israel’s allies in the Gulf,” the senior Israeli defense-system official added, “are designed to ease concerns in the Gulf capitals and maintain their capacity to defend themselves against Iran as it renews its conventional capabilities. It is clear to us that the US agreement to upgrade the Gulf states’ arsenals is linked directly to the fact that starting Oct. 18, the Iranians will have access to parallel weapons systems. What is going on here, in fact, is an accelerated arms race, along with an inter-power game of chicken and a war of nerves vis-à-vis Iran, with everyone on tenterhooks ahead of Nov. 3.”