Prime Minister Benjamin Netanyahu desperately sees how the tough stance of the Trump administration against the nuclear deal with Iran has now morphed and changed into the Americans feeling their way back to the deal. 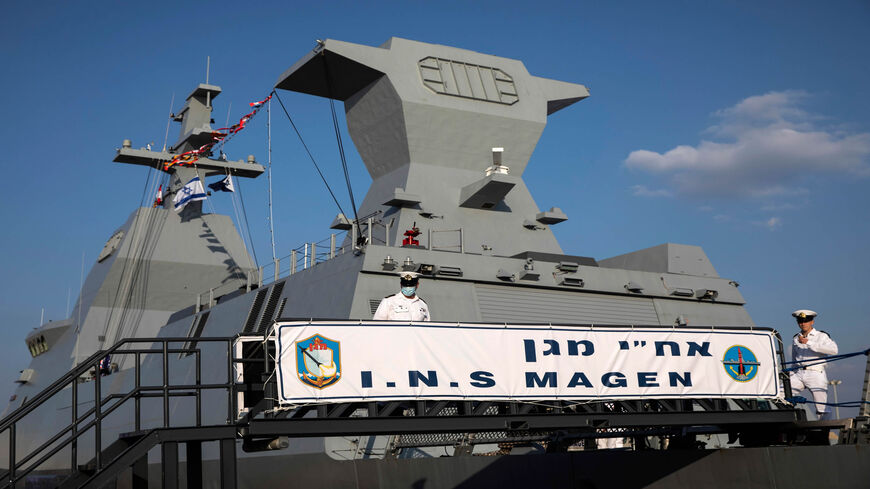 Israeli sailors stand on board the first of four new German-built Saar 6 naval vessels purchased by the navy, in the northern Haifa city naval base, Israel, Dec. 2, 2020. - Heidi Levine/POOL/AFP via Getty Images

What started out in total silence, deep under the radar or the sea, is fast becoming a violent, dangerous clash attracting wide media coverage. Israel and Iran are lifting the veil over their military conflict and no one seems overly troubled. On the contrary. A day after an April 6 Red Sea attack attributed to Israel’s naval commando on the Iranian military vessel the MV Saviz, Prime Minister Benjamin Netanyahu made this amazing declaration at a ceremony marking Holocaust Remembrance Day: “To our good friends as well, I say, 'The deal with Iran that poses and threatens our destruction will not obligate us.'” History, Netanyahu added, has taught Israel that such agreements are worthless. “There is only one thing that we will be committed to: deterring all those who wish to annihilate us from achieving their goal," he warned.

This week’s fast-moving events were nothing short of dramatic. Hours after the attack, US Special Envoy Robert Malley arrived in Vienna for the start of indirect European-mediated talks with Iran on reinstating the 2015 nuclear deal with world powers. Also on the same day, the first Emirati ambassador to Israel, Mohamed Al Khaja, took up his post in Tel Aviv. That evening, Netanyahu informed Israel’s most important ally — the United States — that as far as he was concerned, the Vienna talks were irrelevant and Israel does not intend to abide by any agreement reached.

Israeli analysts describe the last development in the shadow war between Iran and Israel as a “controlled escalation,” meaning the sides are upping the ante but making sure not to lose control and deteriorate into an all-out war. “The problem is that the ability to control deterioration is limited and you could find yourself deep inside a war at any given moment, without meaning to go there,” a senior Israeli diplomatic source told Al-Monitor on condition of anonymity.

Events are further complicated by Israel’s crisis of governance and unprecedented political chaos. The government is barely functioning, Defense Minister Benny Gantz is barely talking to Netanyahu, who is himself entangled in a widely publicized criminal trial. The security Cabinet is rarely convened, decisions are made in ad-hoc or strange forums, and many Israelis fear that Israel could find itself embroiled at some point in open warfare that it did not want.

The alleged naval skirmishes between Israel and Iran have been going on for some two years. The New York Times reported recently that Israel’s naval commando had mounted at least 10 attacks on vessels smuggling weapons or oil from Iran to Syria for Hezbollah. This week’s attack on the Saviz was the first of its kind, as far as is known.

Intelligence officials describe the Saviz as an electronic surveillance and operational logistics platform for Iranian military activity in the Red Sea, used to launch speedboats carrying commando units and to help Iran-backed Houthi rebels mount attacks on Saudi targets. Nonetheless, both sides are clearly trying to avoid inflicting casualties or sinking each other’s vessels so as not to provoke retaliation. Such was the case, for example, with two Iranian attacks on Israeli-owned tankers in recent weeks, which resulted in minor damage.

The explosion on the Saviz, reportedly caused by limpet mines attached to the hull, was followed two days later by an airstrike attributed to Israel on a Syrian weapons depot in suburban Damascus. The razing of the facility, which was being used by the Iranian Revolutionary Guard Corps, lit up the skies over Damascus, according to eye witnesses. Reportedly, Syrian air defenses were activated to intercept the alleged Israeli missiles. One Syrian anti-aircraft missile reportedly crossed the skies over the Galilee region and landed in the southern Lebanese village of Houla.

Israel appears to be branding itself as the regional “enfant terrible,” declaring it will not be bound by any deal reached with Iran and trying to influence negotiations through the use of force.

Meanwhile, a top-level Israeli team is scheduled to visit Washington later this month to present the Americans with Israel’s position on the Iran deal, to share relevant intelligence information and try to convince the United States of the dangerous flaws in the 2015 deal. The team will be led by Israel Defense Forces Chief Lt. Gen. Aviv Kochavi and include Military Intelligence head Maj. Gen. Tamir Hayman and Mossad Director Yossi Cohen. This is the so-called intimate intelligence dialogue that Israel has been trying to launch with the new administration since it took office in January. The two sides have already agreed on a “zero surprise” policy — the Americans will not sign anything without informing Israel in advance, while the Israelis will not undertake unusual operations without advance coordination. The leak — probably from the US side — about the operation against the Saviz likely followed an update from Israel. Whether Israel was pleased or furious at the leak is unclear.

The latest developments cannot disguise the painful collapse of Netanyahu’s strategy vis-a-vis Iran on every front. When he encouraged/convinced President Donald Trump to pull the United States out of the Iran deal, Netanyahu was counting on three possible scenarios: The Iranian regime would collapse under the weight of the harsher sanctions, the Iranians would give in and agree to the 12 demands presented by Secretary of State Mike Pompeo or Trump would eventually order a strike on Iran’s nuclear program infrastructure.

None of these scenarios panned out. President Joe Biden assumed office and Netanyahu is now watching as his plans and hopes are crushed. In desperation, he is intensifying Israeli military pressure and trying to achieve the influence he had on the 2015 talks by threatening to rain on the international parade shaping up in Vienna.

His policy is more dangerous than previous policies on Iran. Israel is looking on in amazement as the Trump administration’s “maximum pressure” strategy has morphed almost overnight into Iranian “maximum pressure” on the United States. The relatively tough line that Biden adopted toward Iran in his first weeks in office has vanished and the Americans are now feeling their way back to the deal, knowing they will not be able to squeeze any significant concessions from the Iranians.

That, in turn, could push Israel to the edge, where Iran is already perched. The election of a conservative or hard-liner president to replace Hassan Rouhani in the upcoming June presidential elections could prompt an Iranian decision to retaliate for every Israeli provocation, risking the control Israel believes it has over the escalation. The Americans, too, are well aware of the sensitive situation, which is expected to feature prominently in the Washington talks with Israel’s top brass.