Disagreement in Israel over retaliation after attack on cargo ship

Heads of security in Israel disagree on whether the country should retaliate against Iran for the attack on an Israeli-owned cargo ship in Oman Bay. 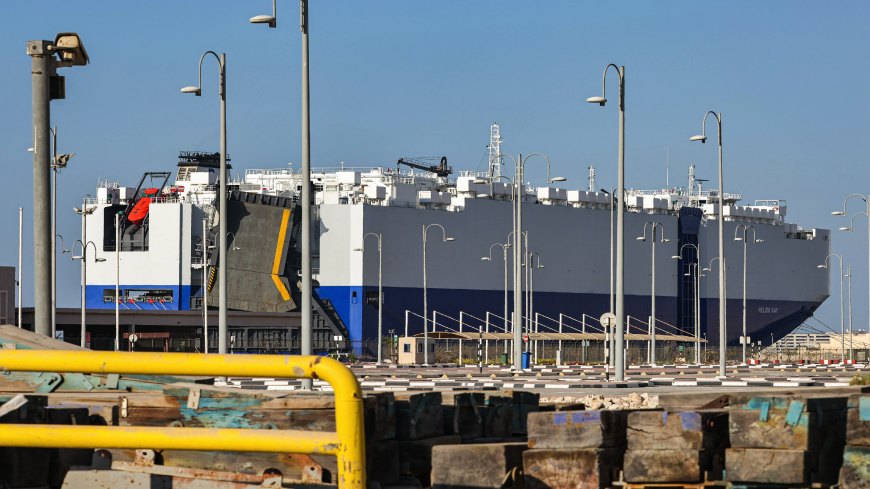 This picture taken on Feb. 28, 2021, shows a view of the Israeli-owned, Bahamian-flagged MV Helios Ray cargo ship docked in Dubai's Mina Rashid (Port Rashid) cruise terminal. The MV Helios Ray, a vehicle carrier, was traveling from the Saudi port of Dammam to Singapore when a blast occurred on Feb. 25, according to the London-based Dryad Global maritime security group. - GIUSEPPE CACACE/AFP via Getty Images

The blast that shattered the silence on Feb. 26 in the Gulf of Oman, ripping holes in the port and starboard sides of an Israeli-owned cargo vessel, is still resonating throughout the region. It is no less significant than the sounds of explosions caused by a US attack a day earlier on Iranian targets in Syrian territory. It took Israel 48 hours to conclude with certainty that Iran was behind the attack on the Israeli-owned vessel. Prime Minister Benjamin Netanyahu said so personally in various interviews on March 1, joining similar public comments by Defense Minister Benny Gantz and the chief of the Israel Defense Forces (IDF), Lt. Gen. Aviv Kochavi. All that was left was for Israel to decide whether and how to respond. Israeli officials have avoided answering reporters’ questions of whether a response was in the works.

The MV Helios Ray, flying a Bahamian flag, is owned by Israeli shipping magnate and vehicle importer Rami Unger, who also happens to be a close friend of former Israeli Prime Minister Ehud Olmert. Israel believes Iran knew the vessel was Israeli-owned and targeted it in retaliation for the repeated blows it has sustained on its facilities in the region in the ongoing military campaign dubbed “the war between the wars.”

Israel also believes that while the Iranian assailants could have easily sunk the ship, they opted to inflict only limited damage. Contrary to its initial assessment that the Helios Ray was hit by missiles, experts now believe a commando raid, probably using small speed boats, placed explosives on the ship’s hull and sped away. “Iran is the only country with such capabilities in that location,” a senior Israeli security official told Al-Monitor on condition of anonymity. “We have evidence that it was an Iranian operation and we believe it was not a random event. The Iranians know they were targeting an Israeli-owned ship.”

Iran, for its part, has denied any connection to the attack. The vessel is now anchored in Dubai where it is undergoing a meticulous examination by Israeli experts in an effort to determine conclusively just how the attack was mounted. Israel must now assess whether the attack constitutes a change in Iran’s strategy or retaliatory response to all the military strikes of recent years on Iranian targets, mostly in Syria, attributed to Israel. Are the Iranians, like Hezbollah, trying to strike a new balance of mutual deterrence by tit-for-tat attacks? What should Israel do? Should it respond to the Iranian action or ignore it, assuming that Iran is still way behind Israel in the war of attrition the two countries are waging against each other?

Substantive disagreements on the matter arose at a Feb. 28 meeting Netanyahu convened with the heads of Israel’s security agencies to discuss Israel’s response to the ship attack. Most of the top brass present were of the opinion that there was no point in launching a specific response to the event, given the absence of casualties and limited damage. They argued that Israel would be better off leveraging the attack for diplomatic impact by presenting the Americans with conclusive proof of Iran’s culpability, adding all the quality intelligence Israel has collected regarding Iran’s continued state sponsorship of terrorism throughout the Middle East, and trying to convince the Biden administration to tighten sanctions on Iran or at least to maintain those imposed on the Revolutionary Guard.

Mossad chief Yossi Cohen presented a different viewpoint, according to which Israel could not afford to ignore a daring attack in the Gulf of Oman on an Israeli-owned target. Cohen, who leaves office in June, is responsible for quite a number of Israeli offensives against Iran, which peaked with the 2018 theft of Iran’s nuclear archives and their smuggling from Tehran to Tel Aviv under the ayatollah's nose. It is unclear whether Cohen was advocating for a public Israeli response or a low-key operation that would avoid entangling Israel in the international arena but would send a clear signal to the target.

Cohen’s position has been rejected, for now. Nonetheless, no final decision has been made, either. The possibility of a public Israeli response three weeks before the March 23 elections is generating grave concern in the political arena. Netanyahu’s gradual but consistent decline in the polls magnifies these concerns.

Iran has served Netanyahu well throughout his political career. He has fanned the flames of the Iranian threat to great heights and repeatedly used them to his political advantage. Now, at almost the last minute before the elections, he has once again been handed this gift that keeps on giving. However, he is no longer as omnipotent as he was. His political rivals, Defense Minister Benny Gantz and Foreign Minister Gabi Ashkenazi, are equal members of his power-sharing government. Netanyahu has consistently avoided sharing discussions and decisions with them almost since their binding agreement was signed last year, operating behind their backs and humiliating them at every turn. However, when it comes to a military strike on an Iranian target, he will have a harder time going it alone.

Netanyahu, it should be recalled, is hardly an aficionado of military adventures. On the contrary, he fears widespread military campaigns and stays away from wars and entanglements to the extent he can. However, his political and personal fate hangs in the balance as the March 23 elections loom, with the results not only vital to his continued hold on power but also to his defense in the corruption trial he faces.

Will these circumstances change Netanyahu? Is he capable of violating all the rules of the game vis-a-vis Israel’s most dangerous enemy? The answer is probably negative. Israel is now debating whether the Iranians were the ones who changed the rules and started a new game. It will take time for Israel to come up with an answer.