News reports from Lebanon and Arab media say an Israeli-owned car carrier was damaged off Fujairah in the United Arab Emirates. 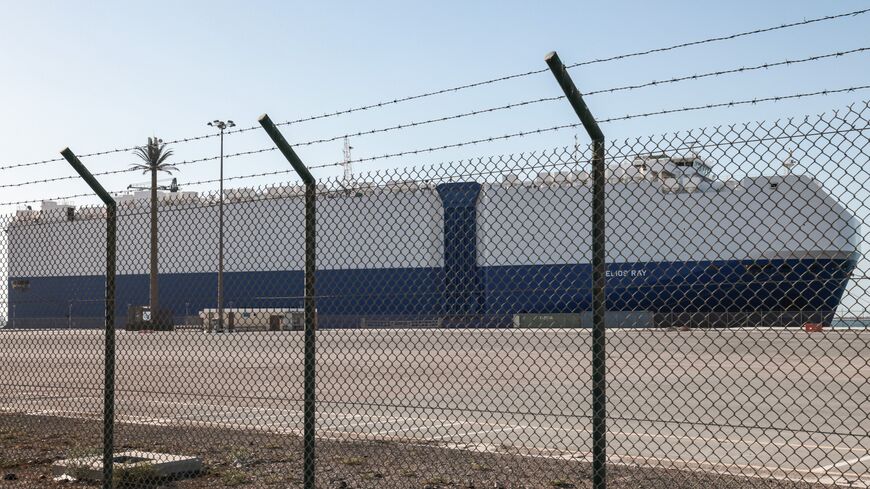 The Israeli-owned, Bahamian-flagged MV Helios Ray cargo ship is seen docked in Dubai's Mina Rashid (Port Rashid) cruise terminal on Feb. 28, 2021. The MV Helios Ray, a vehicle carrier, was traveling from the Saudi port of Dammam to Singapore when a blast hit the ship Feb. 25. - GIUSEPPE CACACE/AFP via Getty Images

Reports from Lebanon say an Israeli-owned ship called the Hyperion was attacked the afternoon of April 13 in United Arab Emirates waters. The Lebanese Al Mayadeen news outlet, affiliated with Hezbollah, said the ship came under fire near the emirate of Fujairah in the Gulf of Oman.

The vehicle-carrier vessel, owned by the Israeli Ray Shipping company and Israeli businessman Rami Ungar, has been sailing under a Bahaman flag for six years. The ship was reported to have sustained light damage above its waterline. No injuries were reported, and the ship did not need to return to port for repair.

The Iranian-affiliated Unews agency reported that two days prior to the attack, the ship had anchored at the Mina al-Ahmadi port in Kuwait.

This is the second Israeli ship owned by Ray shipping that has recently suffered an attack. The vehicle carrier MV Helios Ray, also owned by Ray shipping, was attacked at the end of February in the Gulf of Oman, with a blast that damaged the vessel and forced it ashore. A third vessel, the Israeli-owned container ship LORI, was hit by a missile early March 25 in the Arabian Sea. Israeli officials believe Iran was behind the attacks.

Arab media reported that the Hyperion was hit by an Iranian missile, but no other reports immediately confirmed that. Tehran did not take responsibility for the attack.

The attack on the Hyperion comes after an alleged Israeli attack  this week on the Iranian Natanz nuclear facility and one week after the Iranian intelligence-gathering ship Saviz was damaged in an alleged Israeli attack in the Red Sea. Israel did not take responsibility for either of these incidents. Iranian officials blamed Israel and threatened to avenge the attacks.

Iranian Foreign Minister Mohammad Javad Zarif said April 13 that if Iran determines Israel was behind the strike on Natanz, “then Israel will get its response and will see what a stupid thing it has done.” A Channel 12 report said Israeli security agencies were bracing for a possible Iranian revenge attack and had raised security levels in embassies worldwide.

Meeting April 12 with US Secretary of Defense Lloyd Austin, Israeli Prime Minister Benjamin Netanyahu said, "In the Middle East, there is no threat that is more serious, more dangerous, more pressing than that posed by the fanatical regime in Iran. Iran continues to support terrorists around the world in five continents, threatening civilians everywhere. Iran has never given up its quest for nuclear weapons and the missiles to deliver them. Iran consistently and outrageously calls for Israel's annihilation and works towards that goal. … My policy as prime minister of Israel is clear: I will never allow Iran to obtain the nuclear capability to carry out its genocidal goal of eliminating Israel.’’