Israeli-owned cargo ship rocked by explosion in Gulf of Oman 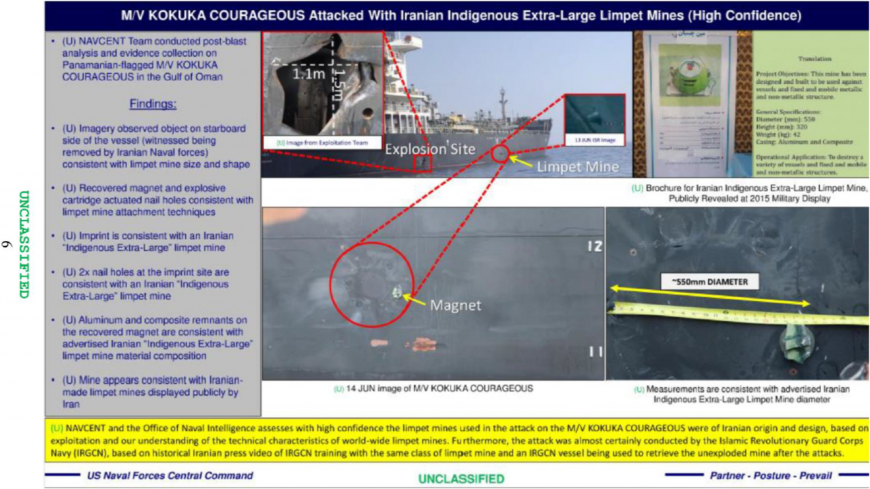 The Israeli owned vehicle carrier MV Helios Ray may have been attacked by limpet mines attached magnetically to its hull on Feb. 26, 2021, in the Gulf of Oman. In the above graphic, the US Navy explains why it concluded that an Iranian limpet mine had blown a hole in the hull of the oil tanker Kokuka Courageous on June 13, 2019, in the Gulf of Oman. - US Naval Forces Central Command / UN Security Council

An Israeli-owned cargo ship suffered at least one explosion while sailing in the Gulf of Oman on Friday in the latest such maritime incident in the Middle East.

The vessel, the MV Helios Ray, quickly turned around and headed for port around 1 a.m. morning after departing from Dammam, Saudi Arabia, and sailing through the Strait of Hormuz. The crew reported no injuries and the vessel continues to sail back toward the strait, according to an open-source maritime tracking website. It was believe that the vehicle carrier was headed to Dubai to assess the damage.

Reuters reported that an explosion above the ship’s water line caused holes in both sides of its hull, but that the vessel and crew were safe.

Kan quoted Ungar as saying that the two holes are roughly 1.5 meters (5 feet) in diameter and that “it is not yet clear to us if this was caused by missile fire or mines that were attached to the ship.”

Similar mysterious explosions struck two Saudi oil tankers near the Hormuz Strait in 2019, as well as two other ships. The US military publicly blamed Iran for the incidents.

The Pentagon subsequently released surveillance footage showing individuals in what appeared to be an Iranian-made boat removing a limpet mine from the side of one of the two damaged Saudi-owned tankers. Iran’s government denied a role in those attacks, but has not yet commented on today’s incident. Limpet mines are attached with magnets.

Friday’s explosion came just hours after the United States conducted an airstrike against a border-crossing facility used by Iran-linked militias in Syria. President Joe Biden approved the strike — which killed at least one member of a Kataib Hezbollah-affiliated militia — in response to recent rocket attacks on US-led coalition bases in Iraq and the Green Zone in Baghdad.

The Pentagon on Thursday night blamed Kataib Hezbollah and another militia group backed by Iran's Islamic Revolutionary Guard Corps (IRGC) for recent attacks in Iraq.  Both Iran and Kataib Hezbollah denied responsibility for the largest of the recent incidents in Iraq. The head of US military forces in the region, Gen. Kenneth "Frank" McKenzie, however, warned earlier this week that Iran’s government should not assume it has plausible deniability for attacks carried out by groups it supports in the region.

Saudi Arabia has also been hit by a recent spate of projectiles from known or suspected IRGC-linked groups in the region.

Officials in both Iran and the United States are maneuvering for leverage ahead of a proposed return to negotiations, in which both governments say they aim to return to compliance with the 2015 international agreement to limit Tehran’s nuclear capabilities.

The administration of President Donald Trump walked out of the agreement in 2018, replacing it with a campaign of economic sanctions aimed at crushing Iran’s economy to force its leaders to pull back support for Shiite militias in Yemen, Syria and Iraq.

The waters of the Persian Gulf have been a stage for the contest between Washington and Tehran in recent years. Last month the IRGC seized a Korean-flagged tanker in the Gulf, citing environmental pollution violations.

The United States confiscated some $40 million in Iranian fuel bound for Venezuela last year with the help of authorities in Cape Verde, citing violations of US sanctions. Iranian officials called the move “piracy.”