Gantz visit coincides with escalation in US pressure on Iran

A report about the United States toughening its stance against Iran was exactly what Defense Minister Benny Gantz was hoping for on his Washington visit. 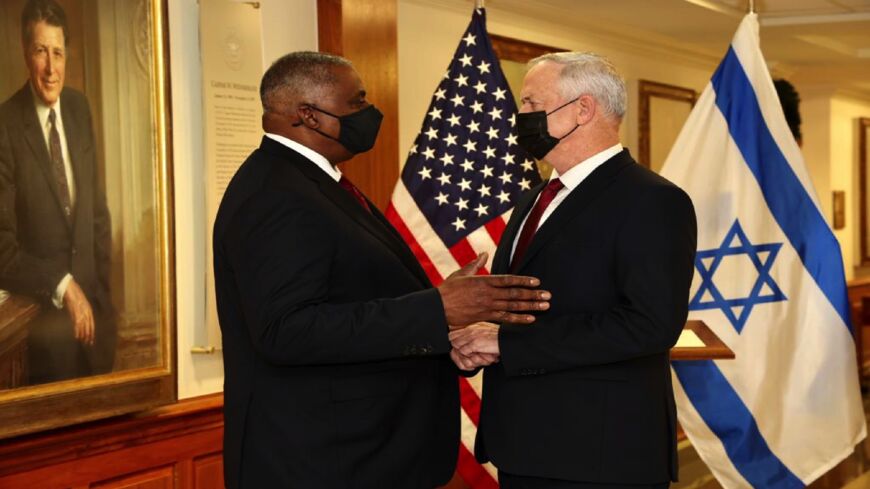 This week’s visit to Washington by Defense Minister Benny Gantz signaled an escalation in the US approach toward negotiations with Iran. The administration, in fact, used Gantz’s visit as a threat tactic to warn Iran that its nuclear program would not be immune from attack forever. Although he knew he was being used, Gantz himself was very pleased in the evening hours of Dec. 9 when he ended his meetings with Secretary of State Antony Blinken, Defense Secretary Lloyd Austin and other top officials. As far as Israel was concerned, the visit had been successful.

Gantz landed in Washington on Dec. 8 at a dramatic moment in the Vienna talks between world powers and Iran, following a first, failed round and the efforts being made to resume them. While in Washington, Gantz was informed that the renewed meeting between the sides on Dec. 9 had also ended inconclusively. The Iranians, it seems, had not come to Vienna to give, only to receive. The real drama, however, was taking place in Washington where an unidentified top US official was telling Reuters ahead of Gantz’s arrival that the two defense chiefs “would discuss possible military exercises that would prepare for a worst-case scenario to destroy Iran's nuclear facilities should diplomacy fail.”

Reportedly, such explicit language has not been used by any top American official since the Biden administration took office on Jan. 20, not publicly and not behind closed doors. “They are starting to understand the situation,” a senior Israeli defense source told Al-Monitor (on condition of anonymity) with satisfaction following Gantz’s talks. “They understand that Iran is trying to make a laughingstock of the world; they understand that it is now or never. Exerting maximal pressure now is vital because once the Iranians reach 90% enrichment (military grade), this will all be a lost cause.”

The negotiations on Iran’s nuclear program have cast a dark shadow over Israel-US relations. The situation is complex. Prime Minister Naftali Bennett was playing the “bad cop” in recent weeks, unambiguously expressing deep Israeli concerns, criticizing the world powers’ approach to Iran and to the negotiations, and threatening a military strike. The much more benevolent cops were Gantz and Foreign Minister Yair Lapid, who continue to avoid public airing of the deep disagreements with Washington.

Israel, however, has not been cast in the role of a cop in this case, but rather of a suspect. It is not the investigator; it is being questioned. As of now, Israel is poised on the front lines alone, waving the so-called military option that it has or does not have vis-a-vis Iran, and trying to convince the world of the severity of Iran’s progress and intentions. Gantz is deeply vested in this mission. Reportedly, he has exposed the Americans to massive amounts of intelligence information, in addition to what Mossad Chief David Barnea revealed to his counterparts earlier in the week in Washington. It is now or never, Gantz reportedly told Austin and Blinken, signaling that if the Iranians achieve 90%, there will be no one to talk to.

Barnea’s meetings with his US counterparts were markedly different from Gantz’s talks. Barnea, who recently entered into the big shoes of his predecessor, Yossi Cohen, realizes that the battle against Iran’s accelerated uranium enrichment has apparently been lost. With Iran having obtained fast, sophisticated centrifuge machines, the knowledge and the means, reaching military-grade material sufficient for one bomb (a readiness level known as 1SQ) is only a matter of the decision to do so. Israeli officials say it would take Iran four to six weeks from such a decision to achieve its goal.

From now on, say some of the Israeli analysts, the campaign should be targeted against stopping Iran’s nuclear weaponization, meaning its conversion of the fissile enriched uranium into a nuclear warhead for mounting on a ballistic missile. Israel believes Iran is 18 months to two years away from such a goal. Israel’s threats of a military strike on Iran’s nuclear facilities in the near future are apparently hollow, and the Iranians know it. What is at stake now is preventing Iran from achieving weaponization capacity. The most important and dramatic development in this regard was the November 2020 assassination of Iran’s top nuclear scientist, Mohsen Fakhrizadeh, attributed to Israel (which has not claimed responsibility for shooting at his car).

Gantz presented his American hosts with the “saner,” less bombastic Israeli approach, telling Blinken and Austin that Iran is not an Israeli problem, but rather a global and regional threat. Nonetheless, Gantz pointed out that Iran was the only country in the world calling for Israel’s destruction and Israel could not afford to ignore that threat. According to reports, Gantz said in his meetings that Israel has no choice, as it cannot let that happen.

Gantz discussed operational matters with the Americans, elaborating on Israeli preparations for what it calls “reviving the military option.” Contrary to popular perceptions, Israel has more than one such option, and in any case, they do not involve a one-off “slam-bang” attack nor a strike by dozens of jet fighters as suggested by drills Israel carried out in the previous decade.

By the way, following one of these exercises, in which some 100 Israeli jet fighters flew to the west and drilled for an attack on Iran, a US Marine showed up in the office of then-army Chief Gabi Ashkenazi holding an encrypted satellite phone. At the other end was his US counterpart, Adm. Michael Mullen. "You’re not going to surprise us, are you?" Mullen reportedly asked Ashkenazi. Ashkenazi responded rather cryptically that Israel intends to defend its national security.

Either way, the US statement about a tangible military option (quoted by Reuters), using explicit language about joint military drills and operational coordination with Israel, constitutes dramatic and very welcome progress as far as Gantz is concerned. A security source privy to the talks quoted Gantz (on condition of anonymity) as telling his American counterparts that “deterrence in our neighborhood means seriousness. Widespread offensive activity against Iranian targets in Syria is being attributed to Israel. The fact that we are taking consistent, ongoing action without letting up or blinking proves to the other side that the arena has not been abandoned and creates the deterrence.”

While in Washington, Gantz also dealt with other issues. He met with the leaders of the pro-Israel AIPAC lobby to discuss congressional objections to a $1 billion replenishment of Israel’s anti-missile Iron Dome interceptors, which has yet to be approved by the Senate. The Palestinian issue came up too, and Gantz drew praise from Blinken for measures Israel is taking to strengthen the Palestinian Authority. But with all due respect to these important matters, Gantz flew to Washington to talk about Iran and was much happier on his flight back, although the road ahead is long and bumpy.