One school in Israel believes that it is in its interest for the new nuke deal with Iran to be signed quickly, so that the IDF will have time to prepare its military option. 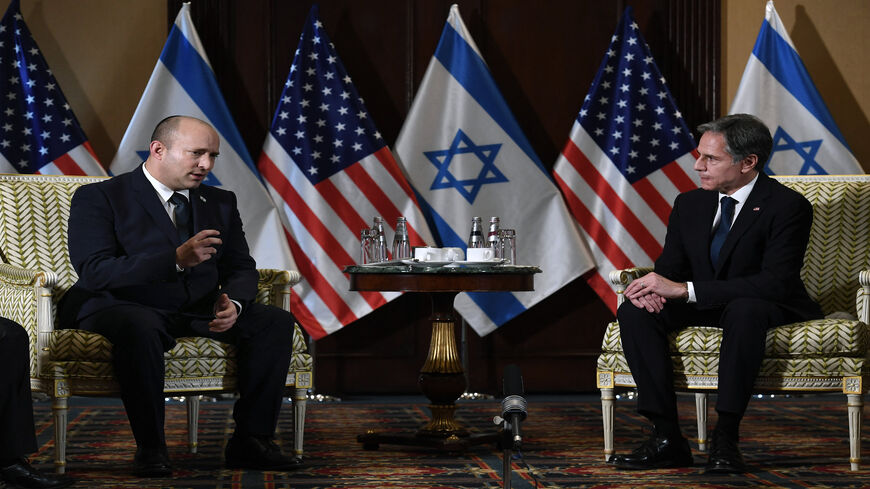 As the negotiations of the Iranian nuclear deal take place in Vienna, Prime Minister Naftali Bennett spoke Dec. 1 with US Secretary of State Antony Blinken, and told him that Iran was utilizing “nuclear blackmail” as a negotiation tactic, and therefore the United States should initiate “an immediate cessation of negotiations.” Foreign Minister Yair Lapid also met this week, on Nov. 30, in Paris with French President Emmanuel Macron, and emphasized to him that Iran is trying to delay negotiations in order to advance its nuclear program and pointed to the immediate need to return to tough sanctions.

Bennett’s statement followed a report published Dec. 1 by the International Atomic Energy Agency that Iran has started to enrich uranium to a 20% purity level using advanced centrifuges at the subterranean Fordow facility. They express Israel’s official position that the nuclear deal with Iran is bad and that the powers should stop negotiations immediately.

Israel is very disturbed at what’s happening in Vienna, since reports from the nuclear negotiations in recent days support the early Israeli estimate that Iran will present a very hard line at the talks and will try to delay returning to the agreement’s framework. Israel believes Iran is delaying in order to use this time to continue the nuclear program without inspection and to stockpile enough enriched material and knowledge that would enable a quick breakthrough to nuclear power.

The Israeli position is complicated.

On the one hand, Israel hasn’t bothered to hide the fact that it’s unhappy to see the United States and European nations interested in signing a nuclear deal with Iran that isn’t essentially any different from the original nuclear deal, the joint comprehensive plan of action, signed in 2015. In its view, the many holes in the agreement would ultimately allow Iran to arrive at a nuclear bomb in several years, within the bounds of international consent.

But on the other hand, despite the declared Israeli approach of opposing the nuclear deal, Israel hopes that if the United States has already decided to sign the deal, it’s best if this happens quickly — the sooner the better. This is because an agreement would at least temporarily halt Iran’s rush toward nuclear capability at this point in time, and would cause it to stop enrichment at high purity levels and stop gaining the knowledge that would allow for a quick nuclear breakthrough. In such a case, Israel hopes, the Israeli defense establishment could “buy time” to complete its preparations to mount a good and reliable military option that could address the Iranian nuclear plan.

Israel has already admitted that because of the signing of the nuclear agreement in 2015, the capabilities of the Israel Defense Forces to attack Iran have become shallower, and that resources were diverted to more urgent needs, like preparing for a war with Hezbollah in the north and alleged attacks in Syria and other locations in the Middle East.

Although the United States left the nuclear deal in 2018 at then-President Donald Trump’s initiative, Israel didn’t change its policy, because it believed that the American president’s “maximum pressure” policy and tough sanctions imposed on Iran won’t allow it to realize its nuclear plan. But in the test of reality, Israel was caught unprepared for the steps of the new administration in Washington, and for the removal of the sanctions on Iran, which led Tehran to strive with all its might toward nuclear capability and to make giant steps toward a bomb.

These developments led Bennett and Defense Minister Benny Gantz to direct the defense establishment a few months ago for a real possibility of an attack on Iran. Resources were allocated in the defense budget, but the air force and army apparently need time to finish preparing for an attack. Preparations aren’t only focused on the attack itself, since Israel has to prepare for the possibility that if it does attack Iran, Iran will try to respond from its territory and from the territory of other states where it is based, and of course, by means of Hezbollah in Lebanon, which reportedly has tens of thousands of rockets trained on Israel.

Despite the many Israeli declarations on the topic, which were apparently meant mostly to strengthen Israeli deterrence against Iran, leaders of the defense establishment understand that the effectiveness of an Israeli attack is doubtful, and still hope that the United States would handle the crisis, toughen sanctions, and if necessary, attack itself. If Israel would have to act by itself in the end, it will need, at the very least, the support of the American administration with ammunition during the war, as well as its help in obtaining more interceptors for the Iron Dome defense system.

In order to coordinate all of these moves and to express Israeli concerns, Gantz will leave for Washington Dec. 8 for a series of diplomatic meetings, at the center of which will be a meeting with US Defense Secretary Lloyd Austin and Blinken. The main topic they will discuss will of course be Iran and the Israeli wish to agree with the United States on the next steps.

Gantz plans to ask his American counterparts to prepare an alternative for the real possibility that the Vienna negotiations fail, which Jerusalem expects. Among other things, Israel will ask the United States for additional displays of strength in the Middle East, which would be more powerful than the flight of American bombers over Israeli skies. Gantz is expected to present to his counterparts with current intelligence on the Iranian nuclear program, suggest that they prepare a plan to impose additional and harsher sanctions on Iran, and ask them to bolster moderate states in the Middle East, which are very concerned about the Iranian moves.

Also on the agenda is an Israeli attempt to advance the American authorization for the Iron Dome interceptors, which is delayed because Democratic legislators have refused to vote on the aid package promised to Israel after Operation Guardian of the Walls in the Gaza Strip.

One way or another, Israel understands that these are critical moments, and hopes that in the end, even if the United States makes all the possible mistakes on the way, when it becomes clear that Iran is a mere step away from a nuclear bomb, the United States would come to its senses and prevent its arriving at nuclear capability, since no American president wishes Iran to become a nuclear nation during his administration.