The warning by Defense Minister Benny Gantz over Iran manufacturing and installing 1,000 advanced centrifuges, and the IDF drill simulating an attack on Iran, express growing concerns in Jerusalem over the reported failure of the Vienna talks. 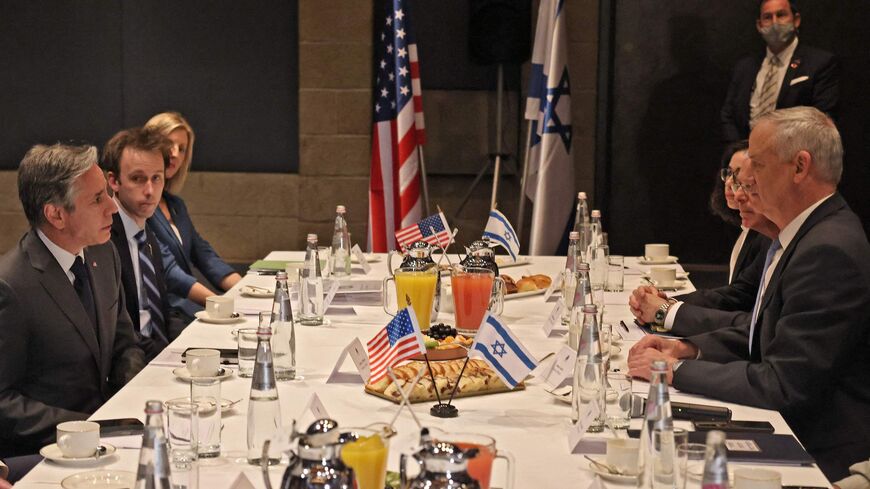 Israel's Defense Minister Benny Gantz (R) meets with US Secretary of State Antony Blinken in Jerusalem on March 27, 2022, ahead of talks in Israel with Arab foreign ministers skeptical of a nuclear pact with Iran. - MENAHEM KAHANA/AFP via Getty Images)

Iran is attempting to complete the manufacture and installation of 1,000 IR6 advanced centrifuges for its nuclear development program, according to Defense Minister Benny Gantz. Addressing a May 17 conference at Reichman University, Gantz said Iran was placing the centrifuges in various locations, including in a new underground facility it was building near the existing central enrichment facility in the central Iran town of Natanz.

“Iran stands just a few weeks away from accumulating fissile material that will be sufficient for a first bomb, holds 60 kilograms of enriched material at 60%, produces metallic uranium at the enrichment level of 20% and prevents the IAEA from accessing its facilities,” he added.

Gantz’s remarks reflect Israel’s latest intelligence assessments to the effect that Iran is taking advantage of the stalled negotiations with world powers on the future of its nuclear program to continue advancing the project. Israel reportedly believes the advanced centrifuges are designed for a nuclear breakout at some point and uranium enrichment to 90% military-grade level within a short time.

In light of these Iranian activities, Israel is seriously concerned about the lack of progress in the Vienna negotiations. Despite objections to the current version of the agreement, Israel had long been hoping for a speedy signature of the document, which would have at least set back the Iranian program until such time as Israel completes its preparations to attack Iran’s nuclear facilities.

Reports these days suggest negotiations have reached a dead end over substantive issues and no breakthrough appears in sight. Meanwhile, as Iran forges ahead with its program, the feeling in Jerusalem is that Israel is the only country in the world still trying to stop it. This is the backdrop for Gantz’s departure for Washington the day after his speech for meetings with national security adviser Jake Sullivan and Secretary of Defense Lloyd Austin. He brings with him the latest intelligence information and an Israeli request to up US pressure on Iran.

Israeli security sources say Israel would like to see increasingly harsh sanctions on Iran, more significant US activity to curb Iran’s emerging nuclear capabilities and, of course, a credible US military threat to destroy them. Israel believes such a threat would validate the military option that it is readying.

However, Israel is not holding out too much hope in the Biden administration in this regard in light of recent messages from Washington indicating that Iran’s nuclear ambitions are not a high priority for the administration.

Israel, for its part, is advancing plans to strike Iran on its own. A large-scale, monthlong military drill launched last week to simulate a multifront war will reportedly include a long-range air force flight simulating a widespread attack in Iran. The flight will take place in the fourth week of the exercise, between May 29 and June 2, with the participation of American refueling planes that would enable Israel’s fighter jets to cover the 2,100-kilometer (1,300-mile) distance in real time.

The very publication of the upcoming drill is evidently also designed to serve as a threat against Iran by indicating that Israel was making preparations but would need up to one year to develop initial attack capability. The broader attack plan would apparently be ready within three years or more, Israeli officials say.

The Chariots of Fire drill was scheduled for May 2021 but was aborted due to the breakout of hostilities with Gaza and ensuing riots in mixed Arab-Jewish cities in Israel. The military considered scrapping this year’s exercise too, in light of the recent spate of Palestinian terrorist attacks on Israeli urban centers, but eventually decided to go ahead after making needed adjustments.

According to the imaginary drill scenario, several members of Iran’s proxy militia in Lebanon, Hezbollah, are killed during an Israeli air raid on Iran-linked targets in Syria, prompting retaliation by the terrorist organization. The ensuing skirmishes between Israel and Hezbollah escalate into full-scale war. The Palestinian Islamist Hamas and Islamic Jihad organization in Gaza join the fray, firing missiles into Israel, while Palestinians in the West Bank take to the streets and launch terror attacks against Israelis. At the same time, militants from among Israel’s 21% Arab minority come to the aid of their brethren by rioting and blocking major roads and intersections to delay the advance of Israeli forces.

Iran’s proxies, according to his scenario, also send unmanned aerial vehicles (UAVs) into Israel’s air space. On May 17, Gantz personally confirmed reports that Iranian drones were intercepted over Iraq in February. He said the UAVs appear to have been launched by the Iranian Revolutionary Guard Corps, and because of the parachutes attached to them, Israel believes they were expected to land in Judea and Samaria. This week, the Israeli military announced that it had shot down a drone belonging to Hezbollah that crossed over from Lebanon into Israeli territory.

Gantz also said Iran was developing different operational precision systems such as cruise and ballistic missiles and drones able to fly thousands of kilometers. “The quantity of this strategic weapon in the hands of Iranian emissaries has increased significantly in the past year. In Iraq, there are hundreds of [munitions]; many dozens have been added this year. In Yemen, the number of [munitions] has increased in the past year, and the Houthis hold dozens of them.”