Riyadh is looking to expand its relationship with the Taliban, to expand and protect its interests in the region, and counter Iranian influence. 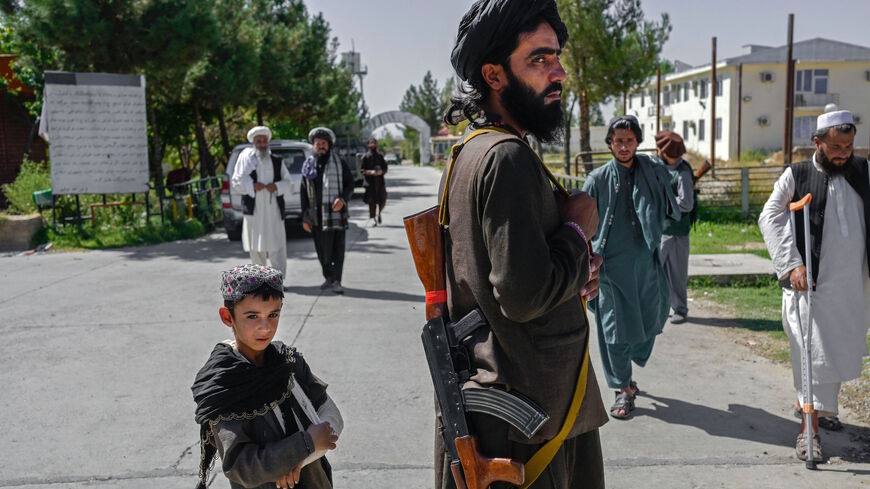 An Afghan boy stands next to a member of the Taliban in front of the Pul-e-Charkhi prison in Kabul on Sept. 16, 2021. - BULENT KILIC/AFP via Getty Images

In 1998, Riyadh closed its embassy when Kabul refused to hand over Osama bin Laden, the leader of Al Qaeda, who was sheltering in Afghanistan. After the attack on the World Trade Center in New York in 2001, Riyadh completely broke off ties.

However, Saudi Arabia cannot afford to remain out of the picture much longer.

“Riyadh is, indeed, seeking a new role in post-US Afghanistan," Mohammed Soliman, a scholar at the Middle East Institute, told Al-Monitor. "In the 1990s, it was among the few capitals that recognized Afghanistan. Currently, however, there are minimal relations between Saudi Arabia and the Taliban.”

After a long gap, what challenges will Riyadh face?

For starters, several regional rivals such as Iran and Qatar have managed to gain direct access to the new Taliban regime. Nowadays, Qatar is in the limelight as it is helping to run the Kabul airport and getting involved in evacuation operations.

In fact, it has been an indispensable ally for the United States on Afghan matters since 2013, when the Taliban opened an office in Doha. In 2016, a peace process between the group and the administration of deposed Afghan President Ashraf Ghani was initiated in Qatar.

Iran has maintained covert ties with the Taliban since 2015. Having discovered a common threat in the Islamic State Khurasan Province, Tehran collaborated with the Taliban to help contain the new terror outfit. Since 2018, Iran also negotiated and hosted talks between Ghani's government and the Taliban.

Consequently, these rival countries have direct ties with the new incumbents in Kabul. If Riyadh cannot restore ties with the Taliban to the same level as 20 years ago, Tehran will probably make more headway.

“Saudi Arabia perceives Afghanistan as a vitally important landscape within its peripheral neighborhood," Caroline Rose, a senior analyst at the Newlines Institute in Washington, said to al-Monitor. "Riyadh finds it imperative to stave off Iranian influence in the country, particularly among proxy forces and the Taliban.”

Also, Turkey is looking to extend its influence by working with Qatar in operating the Kabul airport, but it may not be willing to be part of the airport mission unless its units are involved in managing security.

“Turkey's entrance into Afghanistan and its deepening security partnership with Pakistan further complicate Saudi Arabia's policy options," said Michael Tanchum, a senior fellow at the Austrian Institute for European and Security Studies and a non-resident fellow at the Middle East Institute. "Riyadh cannot afford to become isolated in Afghanistan, but it will need to engage Pakistan and Afghanistan in a way that is congruent with its own reform agenda and ambition to become the premiere Middle Eastern business hub.”

Riyadh would like to prevent Kabul from becoming “an ideologically driven state that adopts an extremist interpretation of religion in all its forms," according to Mohammed Al-Sulami, head of the International Institute for Iranian Studies in Riyadh. "That could turn Afghanistan into a new global terror center, attracting extremists and redeploying them across the world; as was the case with the rise of Al-Qaeda.”

Sulami added in his interview with Al-Monitor, “It is often forgotten that Iran facilitated the passage of Al-Qaeda operatives who carried out the 9/11 terrorist attacks. Therefore, it is extremely important to continue to closely monitor the close relations between Iran and the Taliban.”

Having become more liberal and less fundamentalist, the Saudis have little common ground left with the Taliban, and they would like to avoid any comparison to the Afghan religious group.

Contradicting the latest Saudi-UAE campaigns against militancy, the Taliban follow the Sunni school of thought like the kingdom, but they are Deobandis and not Wahhabis like the Saudis. In fact, their interpretation of Islam is now closer to Tehran than Riyadh. Even Iran’s political system of governance may suit the new regime.

Therefore, Sulami recommends that the region’s countries "devise a watertight strategy that prevents the formation of a dangerous alliance between the two ideological extremes" — Iran and the Taliban. “These countries should work to reconcile Afghanistan’s warring political factions in order to establish a unity government that does not espouse a reactionary ideology, but rather considers the interests of the Afghan people, establishes balanced relations with neighboring countries, and combats sectarian groups and armed militias with cross-boundary loyalties.”

There has been a certain formality between Riyadh and Washington ever since US President Joe Biden assumed power, quite unlike the close ties during the term of former President Donald Trump.

Having faced criticism from Washington on human rights conditions in the kingdom, Riyadh may wish to avoid being put in the same bracket as the Taliban. These days, most Western countries just want to ensure that the Taliban respect fundamental rights — particularly those of women — and that any terrorist outfits are not provided space to proliferate.

Consequently, it is unlikely that Riyadh will recognize the Taliban government any time soon. Instead, it would wait for the United States and the rest of the Western bloc to lead the way, then follow suit. Till then, Riyadh might steer clear of controversies by conveying messages to the Taliban via Islamabad.

“Before, Riyadh used to hedge against Tehran in Afghanistan through support of the Afghan Republic," Rose said. "However, with a Taliban-controlled Afghanistan, Saudi Arabia is recalculating its strategy. Despite recently strained relations, Saudi Arabia and Pakistan are deepening cooperation due to their shared interest in countering Iranian influence in the region. Riyadh will also explore additional, alternative strategic partnerships in Afghanistan and the region, such as deepened ties with India and Central Asian republics.”

In the meantime, one of the Taliban’s main concerns is getting recognized as a legitimate government, to expedite receiving aid or acquiring foreign investment. Therefore, the "Taliban 2.0" may take a slightly softer line than it formerly did.

Correction: Sept. 16, 2021. An earlier version of this article referenced a report that former head of intelligence, Prince Turki al-Faisal, met with top Taliban officials Mullah Baradar and Mullah Yaqoob in Qatar just days before the announcement of the interim government. That meeting did not take place, according to subsequent sources with knowledge of the situation speaking to Al-Monitor, and the article has been revised accordingly.