While Tehran is proceeding slowly when it comes to establishing official ties with the Taliban government, recent talks highlight Iran’s interest in expanding its role in Afghanistan. 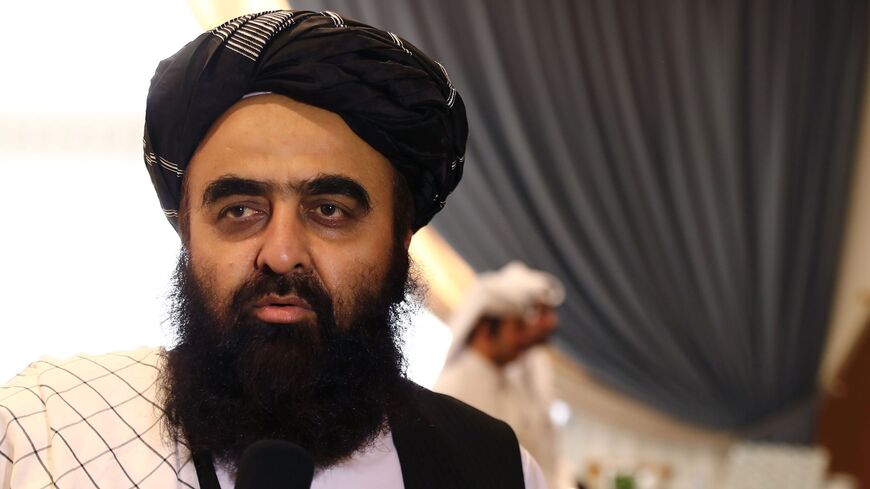 Taliban minister Amir Khan Muttaqi arrives to the signing of a US-Taliban agreement in the Qatari capital Doha on Feb. 29, 2020. - KARIM JAAFAR/AFP via Getty Images

On his first official visit to Iran, the Taliban government’s acting Foreign Minister Amir Khan Muttaqi arrived in Tehran Jan. 9 for talks with his counterpart Hossein Amir-Abdollahian. Having held a preliminary meeting with Iranian officials in Kabul, the high-level Taliban delegation had already finalized the agenda.

According to a tweet by the Taliban foreign ministry spokesman Abdul Qahar Balkhi, the delegation’s visit focused on “political, economic, transit and refugee issues between Afghanistan and Iran.” However, it was the officials’ negotiations with key Afghan resistance leaders in Iran that became the main headline of the visit.

Accompanied by senior delegates, Muttaqi met with Ahmed Massoud, who heads the National Resistance Front and is son of the late Afghan commander Ahmed Shah Massoud, and Ismail Khan, a former Afghan minister and provincial governor.

Confirming the talks in televised remarks, the Taliban foreign minister seemed hopeful, saying, “We assured all of them that they can come back to live freely and safely.” Yet the situation remains tense in Afghanistan, with two violent attacks taking place in Nangarhar and Kabul as the talks were underway. The threats to the Taliban government persist from both Islamic State operatives and former members of the Afghan military.

Ostensibly, Tehran facilitated these talks to bring the two rival factions together, but the resistance spokesman Ahmadi insisted that the main motive for Muttaqi’s visit was to “gain official recognition from leaders in Iran.” Though it shares a 900-kilometer border with Afghanistan, Iran believes the new administration is not inclusive and does not represent the ethnic minorities in Afghanistan.

Taking a similar stance decades ago, Tehran never formally recognized the Taliban, even during their previous stint in power from 1996 to 2001. A national political reconciliation in Afghanistan would fulfill one of Tehran’s main conditions for recognizing the current regime.

Caroline Rose, a senior analyst at the Newlines Institute in Washington, told Al-Monitor that Iran has been deepening its influence within the “Talibanized Afghanistan” following the withdrawal of US troops last year. “Not only has Iran called upon the US and partners to unfreeze Afghan assets for humanitarian purposes, but Iran’s Foreign Minister has hosted Afghanistan’s acting Foreign Minister in Tehran. Signs point to an eventual decision to recognize a Taliban-controlled Afghanistan.”

Nevertheless, Iranian Foreign Ministry spokesman Saeed Khatibzadeh stressed at a press conference before Muttaqi’s arrival that, “Today, we are basically not at the point of recognizing [the Taliban].”

“Iran is OK with a Taliban-controlled Afghanistan as long as certain conditions are met,” Sina Azodi, a non-resident fellow at the Atlantic Council in Washington, told Al-Monitor. First, he said, Iran wants the Taliban to prevent the rise of terrorist groups, especially ISIS Khurasan. Secondly, Tehran is concerned with the transit of narcotics through its territory.

Lastly, Azodi added, “The security and safety of Shiites in Afghanistan is also a source of grave concern to Iran. I believe that as long as these interests are met, Iran will have no problem with Taliban in power,” even if it does not recognize the Taliban in the short term.

However, by helping the Taliban government at a time when it lacks public support, Tehran can maintain sustainable relations.

Kabul remains Tehran’s fifth largest export destination, and bilateral trade has been worth $3 billion in recent years. In addition, Iran exports 110 megawatts of power to Afghanistan, and its power grid is connected to the city of Herat. Before the Taliban took over, Tehran had finalized long-term deals to add 500 to 600 megawatts capacity with the Ghani administration. Right now, the maximum export capacity is around 175 megawatts.

Iran’s Chabahar port can play an important role in reviving landlocked Afghanistan’s economy, and Tehran, New Delhi, and Kabul have a transit trade agreement since 2017. Though this port is exempted from sanctions on Iran, perpetual instability in Afghanistan and the ensuing uncertainty after the Taliban takeover have slowed it down.

After Muttaqi’s visit, Amir-Abdollahian spoke to Indian Foreign Minister S. Jaishankar on the phone and announced “measures and cooperation” in shipping Indian wheat and medicine to Kabul. India operates a key terminal at Chabahar, and its port activities in Iran would also get a boost.

As India does not have direct access to Afghanistan, it has not been able to send 50,000 metric tons of wheat it promised Kabul as humanitarian assistance in October. India had requested Pakistan to let the consignment go as a special case, as it does not allow two-way trade between India and Afghanistan through its land routes.

This time, Pakistan decided to make an exception, but the logistics for transferring Indian wheat to Afghanistan are still not settled, so Amir-Abdollahian’s offer has been warmly welcomed by Indian media.

Also, Jaishankar tweeted that the Chabahar port came under discussion.

“India, after initial bravado, has made a rethink about its Afghan policy," Ashok Swain, professor of peace and conflict research at the Uppsala University in Sweden, told Al-Monitor. "The prospect of complete isolation in the neighborhood, the geostrategic factors and the fear of increasing militancy in Kashmir forced this rethink.”

Consequently, “With the help of Russia and Iran, India is trying to establish a somewhat working relationship with the Taliban. The Taliban also expects to use the India card to negotiate with Pakistan on several tricky matters. In this context, India and the Taliban need each other, but their relationship at best will be limited and transactional.”

Planning to visit New Delhi soon for the first time, Amir-Abdollahian could work out more ways for extending India and Iran’s role in Afghanistan. According to the Iranian foreign ministry, Jaishankar expressed pleasure over the forthcoming visit of Iran’s top diplomat and called it a “very good opportunity to develop bilateral cooperation.”