The recent rise of the Taliban in Kabul has expedited New Delhi's efforts to boost ties with Iran, which is positioned to be India's main corridor to Afghanistan, yet major challenges remain. 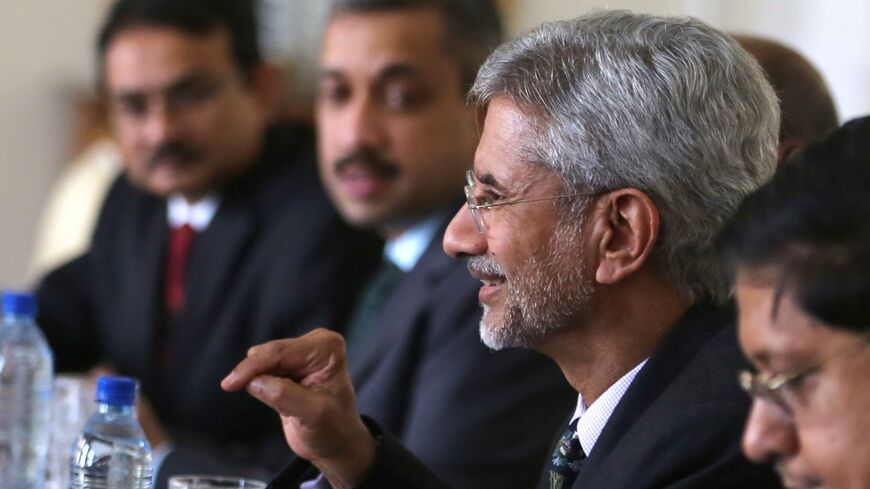 Indian Foreign Minister Subrahmanyam Jaishankar gestures during bilateral talks with his Iranian counterpart (unseen) in Iran's capital, Tehran, on Dec. 22, 2019. Jaishankar and India are now working to smooth ties with the new Iranian government of President Ebrahim Raisi and to get a toehold into Afghanistan through New Delhi's connection with Tehran. - ATTA KENARE/AFP via Getty Images)

The Indian government, which has been reaching out to the new administration in Iran to establish closer ties that New Delhi sees as important to its regional aims, has seen its efforts become all the more pressing in light of the US withdrawal from Afghanistan and the Taliban's subsequent takeover.

Indian Foreign Minister Subrahmanyam Jaishankar has visited Tehran twice this summer, the second time as one of the high-profile guests at the Aug. 5 inauguration of Iran’s new president, Ebrahim Raisi. Just weeks before, Jaishankar had presented the Iranian leader with Prime Minister Narendra Modi's handwritten note of congratulations on Raisi's June 18 election victory.

D.P. Srivastava, a former Indian ambassador, said, “The presence of the [foreign minister] at the swearing-in is itself a pointer to the view held by India at the highest level. We have common interests in the region.”

Amid the US withdrawal of troops from Afghanistan and the quick rise of the Taliban, conditions remain chaotic and unstable. India, like many other countries in the region, is now trying to gain a foothold in Afghanistan. As India has no common borders with Kabul — and its archrivals Pakistan and China do — New Delhi sees its gateway to Afghanistan as going through Tehran, which also abuts Afghanistan. Indeed, India has long been working with Iran on providing an economic pathway from the Iranian port of Chabahar into Afghanistan.

Iran and India signed a strategic defense pact, the New Delhi Declaration, in 2003, and further security collaboration could be an additional dimension in the countries' ties.

Ashok Swain, a professor of peace and conflict research at Uppsala University in Sweden, told Al-Monitor, “India and Iran have enjoyed good relations and bilateral cooperation for decades as they have strong cultural links and common strategic objectives.”

Swain said, “Iran’s growing relations with China have affected Indo-Iranian ties to some extent, but both India and Iran see Taliban-controlled Afghanistan as a threat to their national unity and security, so they are likely to come together and strengthen their bilateral cooperation further, particularly on security matters.”

The interests of Tehran and New Delhi have traditionally converged when it comes to Afghanistan. In the 1990s, India and Iran supported the Northern Alliance, which opposed the Taliban. Both worked with the government of Afghan President Ashraf Ghani, who has now fled the country.

Tehran clinched a comprehensive strategic partnership with Beijing just months ago; even though New Delhi would like to prevent Iran from tilting toward China and Pakistan, the deal has been done and will likely affect the India-Iran relationship.

Michael Tanchum, a senior fellow at the Austrian Institute for European and Security Policy and a nonresident fellow at the Middle East Institute, told Al-Monitor, “During the 20th century, Iran and India enjoyed a broad alignment in Afghanistan with the objective to contain Pakistan’s effort to develop strategic depth. However, the strategic equilibrium in Eurasia has fundamentally changed and it will not be a ‘back-to-the-future scenario’ for an Iran-India partnership in Afghanistan.”

Tanchum, comparing the advantages of both strategic alliances for Iran, said, “The reason is that China exercises a substantially greater power projection capability across Eurasia than it did 20 years ago. In response, India’s placed itself more firmly in alignment with the United States. At the same time, the Iranian regime in Tehran needs a certain level of strategic cooperation with Beijing to survive.”

Moreover, he said, “China shares a border with Afghanistan in the Wakhan Corridor and maintains a military presence adjacent to that corridor in Tajikistan. China can put a significant military presence on Afghan soil while India cannot, or at least at prohibitively greater difficulty and expense. While Iran will attempt balance with some level of strategic outreach to India, the old strategic equation no longer applies. In the current Afghanistan situation, it is more of a fuzzy math.”

Second, India's joint projects with Iran have moved at a snail's pace.

After economic sanctions were clamped on Tehran due to President Donald Trump's withdrawal from the Joint Comprehensive Plan of Action (JCPOA) nuclear deal, India’s oil imports from Iran dropped drastically. Recent high-level energy talks between Raisi and Jaishankar must render solid results to end this constant strain to bilateral ties.

Also, India’s development plans for Iran's Chabahar port on the Gulf of Oman have been slow-moving, although recently New Delhi has tried to resume some work at the port to boost its cargo handling capacity as it expects that US sanctions could be lifted soon. Indian participation in Chabahar-Zahedan railway to provide goods to Afghanistan and the Farzad-B gas field project was stalled in part by the US sanctions on Iran.

A European diplomat in Islamabad who was previously posted in Iran told Al-Monitor on condition of anonymity, “Tehran looks at New Delhi as a relevant potential economic partner. However, for the future, much will depend on the possible resumption of the JCPOA. If it is achieved and the US sanctions are lifted, the potential for Indian investments in Iran energy projects could become significant. But at this moment Tehran, due to the uncertainty about it, wants to keep all the cards in its hands.”

The diplomat said that is why, despite New Delhi courting Tehran over the last decade, "Iran has been closely cooperating with China, and signed a cooperation agreement for 25 years in March 2021. I believe Tehran is very cautious, despite recent public statements by Raisi himself, because in this moment it is not clear if the nuclear deal will be revived or not.”

The envoy added, “China is a kind of Plan B for the future, despite the Western-oriented feelings of many senior officials in the [Iranian] institutions. India, on the basis of experiences from previous years, is perceived as too much linked to the US administration and it cannot, from Tehran’s point of view, offer the same assurances in the medium-long term.”

Finally, there is the geographical aspect.

Both countries had been planning trade routes such as the International North-South Transport Corridor. For India to compete with China, it needs direct access through Chabahar to Afghanistan and onward to Central Asia. But the turbulent conditions in Afghanistan will likely bring these connectivity routes to a standstill for now.

Iranian authorities have lately had to establish communication links with the Taliban to fulfill assurances regarding border security. The Taliban first took over major cities such as Herat and Zaranj relatively close to the Iranian border before moving on to the capital.

Last month, the Iranian Foreign Ministry hosted a round of intra-Afghan talks with both Kabul government representatives and the Taliban. Meanwhile, there are an estimated 3 million Afghans in Iran, many there as a result of previous Afghan wars, and more Afghan residents have been trickling in due to the ongoing chaos.

Unlike India, Iran is being directly affected by events in Afghanistan and it is having to deal with some serious issues.

Consequently, though Iran-India ties appear set on an upward trajectory, basic realities on the ground and the changing geopolitics in their surroundings could have some impact. This, in turn, will create fresh challenges for their relationship and each side might have to adopt a wait-and-see attitude.