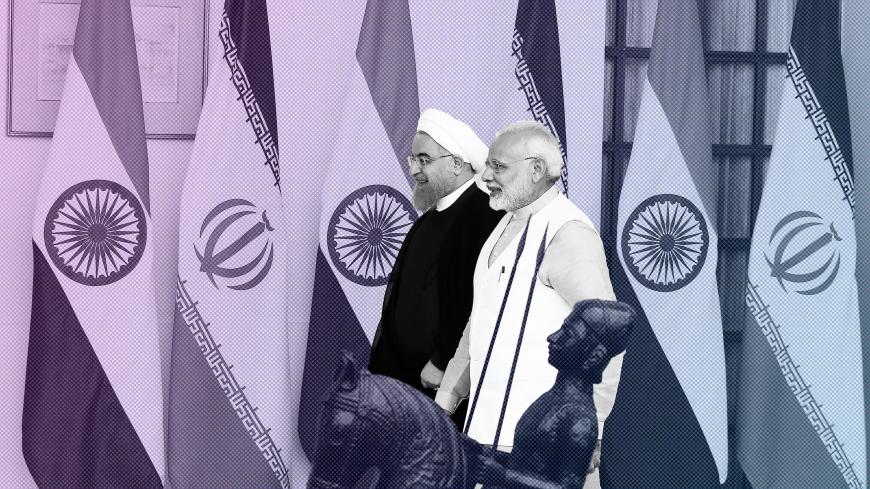 Iran and India held their 19th joint commission meeting Dec. 22-23, as the countries’ bilateral relations are at their lowest in probably a decade.

This commission framework was supposed to be a milestone for enhancing Tehran-New Delhi cooperation. Though some progress was made this year, the meeting is now a barely meaningful event, mainly because of the tension between Iran and the United States.

The India-Iran Joint Commission began in the late 1960s. At the time, its main agenda was expanding economic and cultural ties. While it achieved promising results during its early years, bilateral relations cooled over conflicts on the subcontinent. Iran, as part of the Western bloc of the Cold War and a member of the Central Treaty Organization, chose to support its Islamic and allied neighbor Pakistan during the 1971 Indo-Pakistani war.

However, by the end of the 1970s, numerous circumstances had changed, including Iran’s allegiance to the West. Iran-India bilateral relations entered a new era.

While the early joint commission suffered because of friendly Iran-West relations, in recent years the body has faced tension caused by India’s close ties to the West. The disappointing course of the commission’s only significant goal in recent decades — developing Chabahar Port — speaks for itself. The strategic port’s joint development was agreed on in 2003, halted in 2016 as a result of international sanctions against Iran, initiated again in 2016 as part of a trilateral agreement between Iran, India and Afghanistan, and interrupted again by US President Donald Trump’s withdrawal in 2018 from the Iranian nuclear deal and unilateral US sanctions. Although Trump’s administration exempted Chabahar Port from sanctions, the general considerations about collaboration with Iranian institutions prevented companies from getting engaged in the project. Therefore, India cut the project’s budget by more than two-thirds for the current fiscal year compared with the previous one.

Now, however, almost four years after the trilateral agreement, the United States has reassured would-be participants in the project by issuing a written version of the sanctions waiver, and the Indian companies "are trying to go ahead." Indian Foreign Minister Subrahmanyam Jaishankar described the recent session as "very productive."

That’s just a sample of how the United States factors into Iran-India relations. The consequences and implications aren’t simply limited to a port development or economic collaboration between Iran and India. India highly values its relations with Iran, and it is now plagued by Iran-US tensions — hostility that could even prove harmful to America’s long-term interests in the region.

During the past two decades, Iran and India have been developing a strategic partnership that is broadly part of India’s plans for what it calls its “extended neighborhood.” There are two regions at the heart of the giant rising power’s geostrategic interests: the Indian Ocean, and central Asia (Kyrgyzstan, Kazakhstan, Turkmenistan, Tajikistan and Uzbekistan) plus Afghanistan.

Moreover, India’s rapidly developing economy is thirsty for energy and markets for export, with Europe as the top destination. Iran was a crossroads for all of these ambitions. It has the world’s richest gas reserves as well as the fourth-largest global oil reserves, while its troubled relations with the developed world could work in the favor of newer Indian companies looking to invest and work in Iranian energy industries.

Also, Iran sits on India’s path toward both central Asia and Europe. Chabahar could have been a precious gate to Afghanistan and central Asia through Chabahar-Zahedan railways and the Indian-built Zaranj-Delaram highway in Afghanistan, as well as an entry to Europe through the International North-South Transport Corridor. But all of those ambitions are at stake due to the US sanctions against Iran and are putting pressure on India to downgrade its partnership with Iran overall.

As if that’s not enough, India bowing to pressure and cutting off its oil imports from Iran struck a huge blow to their bilateral relations. This came on top of India’s vote against Iran before the International Atomic Energy Agency in 2005, 2006 and 2009. Tehran was, and still is, so greatly taken aback by those decisions that they will affect Iranian leaders’ perception of their relations with India in the future, without a doubt. Iran's recent joint naval exercise with China and Russia in the Indian Ocean could partly be interpreted as an answer to those controversial moves by New Delhi.

But what could US pressure on Iran-India relations do for Washington's interest? First, it ties the hands of India, a crucial partner in any potential confrontation with China. India is an inevitable partner for the United States in Asia’s balance of power against China, and being deprived of irreplaceable benefits that Iran could provide does not help India geopolitically or economically. Second, under the current circumstances, the United States risks losing all relations with Afghanistan. Washington already is dependent on Pakistan to supply its troops in Afghanistan and protect its interest in the crisis-prone country. Considering the intimate relations between Pakistan and China, if rivalries in Asia rise up and Islamabad chooses to stand by China — a very probable assumption — the United States will face great difficulty connecting with Afghanistan.

Moreover, Washington has been trying desperately to outsource some of its responsibilities in providing order and security in Afghanistan, and India is the most valid option. Considering India’s geopolitical limitations, close ties with Iran are a must, and the current state of their relations does not help. And finally, with the rapidly growing rivalry between the United States and China, which could be approaching the direct-confrontation point, Washington needs to keep some actors neutral if it expects to have a functional containment strategy against China.

Iran, considering its broad geopolitical potential and rich resources, is one of those actors. If Tehran joins Beijing wholeheartedly, it could give China a boost and bring about more difficulties for the United States’ grand strategy. Promoting an India-Iran partnership could have been a very simple, trouble-free way to keep Iran at bay. The recent Iran-China-Russia naval drill might act as a warning for US leaders.